Finishing my latest batch of acquisitions through eBay and local purchases are these cards.


Yeah, I'm not going to let a printing plate leave my hands when I'm holding it in a local card store. Well, if it were way over priced I might, but I think it was at a fair price. Besides, I love the 2013 Topps Archives set with its older designs, and I love this wide-eyed photo of Travis Benjamin. And it isn't as though there is another one of these floating around. Pretty cool to pick up.


Not as rare as a printing plate, but a card of a way more accomplished player was found at my last card show from a new dealer that only pulled out his small stock of football when I asked if he had any.


I actually own another jersey card from a different insert set in 2009 Donruss Threads. The jersey in that card looks the same as this one. I'll assume that it was from the same jersey. The other card is also numbered out of 250. I wonder how many pieces they get out of a jersey, and how close these pieces might have been from each other.


Although it looks like the front of the Winning Materials card is scratched, that is how they are printed. Seems like a silly design feature to me.


I like die-cut cards so the badge shape is pretty cool for the Weeden card.


I was happy that a local store had both of the Unparalleled base cards for this set, and believe it or not, I actually think they scan better than they look in hand. They are quite shiny, and an employee at the store said that she felt like she was getting a headache from just sorting the cards that were opened. Oh, and as for the name, Unparalleled? Don't let it fool you, there are many parallel sets to be found.


The Kessler insert is shinier than the base cards. 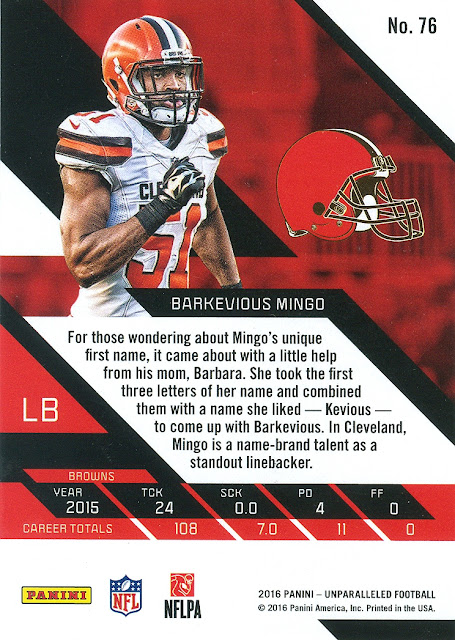 I'll show this back of the Mingo card because I know people like his first name, and the back explains where it comes from.


While the card has a nice design, and shows the card number in a good spot that is very easy to see and sort, it really doesn't have too much information on it. From the card, I can't tell how long his career has been, where he went to college, how he came to the team, or any of his physical stats, all of which I look for when I look at a card.


Moving on from Unparalleled to a single card that I needed from this year's Donruss set.


Ricardo Louis has the most catches among rookie Wide Receivers for the Browns this year, but that is only because of the injury to Corey Coleman. I've mostly liked what I've seen from him this year but he does have to work on some of some of the drops that have happened.


Finally, the local store had also put aside a team set of all the veteran cards from this year's Score set, along with two of the this year's rookies. I'll show them as a group.


I like that the veteran's cards showed all three Browns jerseys, but the orange pants were nowhere to be seen. I think I still prefer the classic jersey, but it is nice to see all three here. Of them, I think I prefer the orange one that Duke Johnson is wearing.