While in Arizona over the weekend, I popped into Showtime Sports Cards in Tempe, a store that I had been to last Spring with Corky from the Pack War blog.


I did a quick walkthrough of the store before digging into various boxes of cards. On the counter were a few piles of 2016 Panini Prizm Football, a set that had just been released. I asked if the cards were for sale, and picked out one of each Browns card that I came across.


The cards look similar to Panini's previous years with clean writing and good pictures. Sadly, though, they have a tendency to pick up fingerprints and dust. It might also be nice to include the player's position on the front but that is a minor quibble.


Here is a card back: 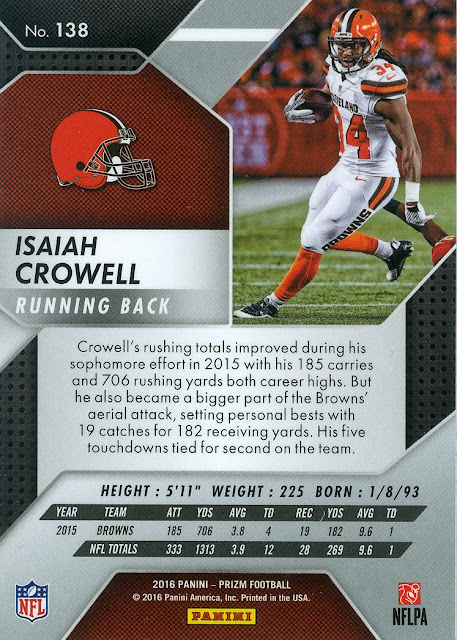 As you can see, the most current season along with career stats. For Isaiah Crowell it is a two-year career. It might be nice to show how many seasons are included in the NFL Totals line.


The card lists height, weight and birthday, but doesn't include college or draft position. (In Crowell's case, Undrafted from Alabama State.) I know different Panini sets list different things, but it is still information that I like to see.


The back picture is the same as on the front of the card but the background shows up cleaner.


The player's position is listed under the players name, underneath the team logo, and the card number is nice and clear in a good position at the top left of the card.


I liked the write-up on the back.


This completes the veteran Browns players from the base set. Interesting enough, all the cards end in 8 and are in intervals of 10. I haven't checked a checklist but assume that Panini has done that for the other teams as well.


One of my pet peeves is getting cards late in the season of players that didn't make the team. Brian Hartline was released by the Browns on May 23, 2016. I guess the lead time for sets is over five months with the end of October release of this set. No matter, it is still a Browns card for my collection, and I do like the photo that they used.


I didn't come across any Prizm versions of any of the Browns veteran players, but I soon realized while looking through the cards that the rookies only came in Prizm form.


After not drafting any wide receivers in 2015, the above three wide receivers were all drafted in 2016, including Corey Coleman with their first round pick, number 15 overall. He is expected to come back from a broken hand this week.


In Coleman's absence, Ricardo Louis has been seeing a lot of playing time, and has made some nice catches but has to work on not dropping as many balls that he has.


Higgins has had limited playing time so far this year.


I'm not sure, but I think that DeValve may have caught his first career pass last game.


Ogbah, the Browns second round draft pick this year, has looked pretty good and is leading the team in sacks at this point of the season. 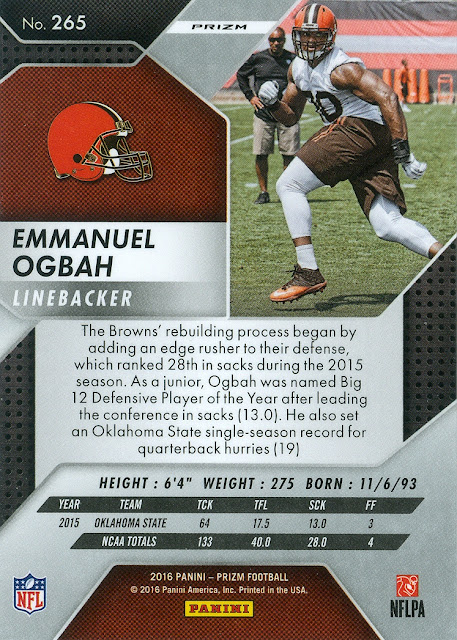 You can see that the Prizm backs are marked as such, and that the rookies' cards include the same points of information as the regular veterans' cards with the most current college year being shown along with their collegiate career total.


The store didn't have any other Browns parallels, inserts or autographs so I'm sure that I still have plenty of cards to chase for this set.