Looking at my sports calendar I discovered that Hall of Fame player Paul Warfield was born on this day in 1942.


Like last week, with Bernie Kosar's birthday, I figured this would give me a good opportunity to do a spotlight on Paul Warfield's cards in my collection, borrowing scans of the cards from The Trading Card Database. (Some of the scans are ones that I've contributed to the site.)


Paul Warfield's rookie card is the first big card purchase that I ever made. I noticed that a local store had a copy of it in its display case for a couple of years in the early 1990s, and I always had my eye on it every time that I went in. My roommate at the time, a fellow collector, would notice me go back and look every time we were in the store. One day we had a discussion and he asked me how likely would it be that I would ever see another one of these to pick up. Although there were regular card shows, being in Canada hockey was predominant, with baseball right behind. Junk wax football was easy to find, but vintage was tough. He helped me convince myself, and I used money from an income tax refund to pick up the card. It became the feature of my collection.


In a way, I wish that I had scanned my rookie card because it is in very nice shape, but I don't remember it being as white as this scan that I borrowed.


Paul Warfield was born in Warren, Ohio on November 28, 1942. He was raised and went to high school in Warren before attending and playing football for The Ohio State University.


I own 36 different Paul Warfield cards, and the above card is the only Ohio State card that I have in the collection. I also have just over a dozen new cards of his coming with my COMC Black Friday shipment, but I don't think any of them are college cards either. I'm a little surprised that I don't see as many college cards for him as opposed to some of the other selected players.


in the 1964 NFL Draft, Warfield was the Browns first round pick, number 11 overall. He had a very good rookie season with 52 receptions for 920 yards and 9 touchdowns, helping the Browns win their last NFL Championship.


In 1970, he was traded to the Miami Dolphins for the 3rd overall draft pick, Purdue Boilermakers All-American quarterback Mike Phipps. (Phipps had a disappointing Browns career that eventually saw him replaced by Brian Sipe after an injury in 1976. The good news, though, is that the Browns traded him to the Bears in 1977 for a 1978 first round draft pick that was used to draft Hall of Fame player Ozzie Newsome.)


After five seasons, and two Super Bowls, with the Dolphins, Warfield spent one year playing in the World Football League before returning to the Browns for the final two seasons of his career.


Paul Warfield retired after the 1977 season, and was inducted into the Pro Football Hall of Fame in 1983. He finished his career averaging over 20 yards per reception, and scoring a touchdown every 5 receptions.


The only autographed card that I own of Paul Warfield is from the 1991 Pro Line Portraits set. 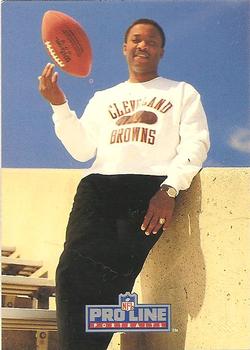 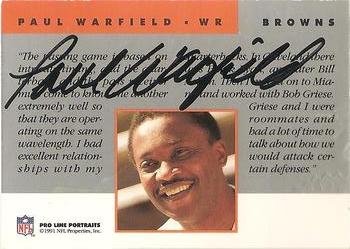 The lowest print run of a serial numbered card that I own of him is numbered to his uniform number.


I do not own any memorabilia cards of Paul Warfield.


I am happy that modern sets still include cards of retired players. It allows me to add new cards of Hall of Fame players in their vintage uniforms. With the current Browns team at 0-12 it is nice to get reminders that things were great for the Browns once, even if it was before I was born.