I recently received a message on The Trading Card Database from the member by the name of 'blackshirts' asking if I had any interest in picking up eight stickers from the 1988 Panini NFL Stickers set that I needed.

Since they were the last eight stickers I needed for the team set, I was thrilled that he asked, and after he gave me an acceptable price, I quickly agreed and forwarded him the payment. He mailed the stickers out that day, and they were waiting for me when I went to my PO Box.

I actually started buying these stickers when they came out - they were one of the first NFL sets that I came across. I still have my incomplete sticker album, missing 13 stickers. My Browns page is mostly complete, missing only the helmet card seen below.

In the 1988 Panini Stickers set, there were three foil cards per team. The team helmet, the team uniform, and then a half sticker with the team name.

Since the number 85 was used for the uniform sticker, I feel compelled to mention that wide receiver Clarence Weathers wore number 85 during the 1988 season. He caught 29 passes and 1 touchdown during the season.

The backs of the foil cards were different than the rest of the stickers as they were cards unlike the paper that one would normally peel off the back of a sticker. What did they have on their backs? Let's see. 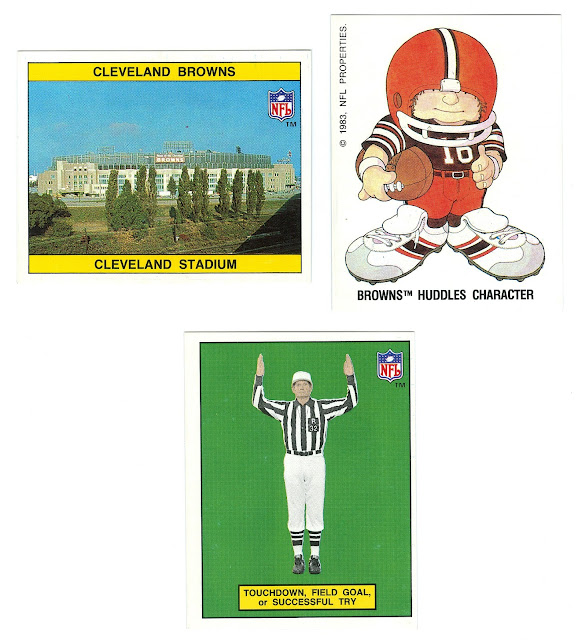 The team pages consisted of 11 individual players and one action sticker. The book also had pages for All-Pro players as well as a couple of featured players for the AFC and NFC pages in the middle pages.

The sticker to the left is the Brown's action sticker. It appears to show Bernie Kosar in the middle of dropping back into the pocket after taking a snap.

Although it looks like the photo on the sticker to the right may have been taken just after the first sticker, you'll notice that he has white long sleeves in the first sticker, and no long sleeves in the second one, so they are from a different game. The second sticker is part of the AFC page in the middle of the sticker book. (The other featured AFC player is the Seahawks' Curt Warner. I mean, everyone remembers the Running Back Curt Warner don't they?) 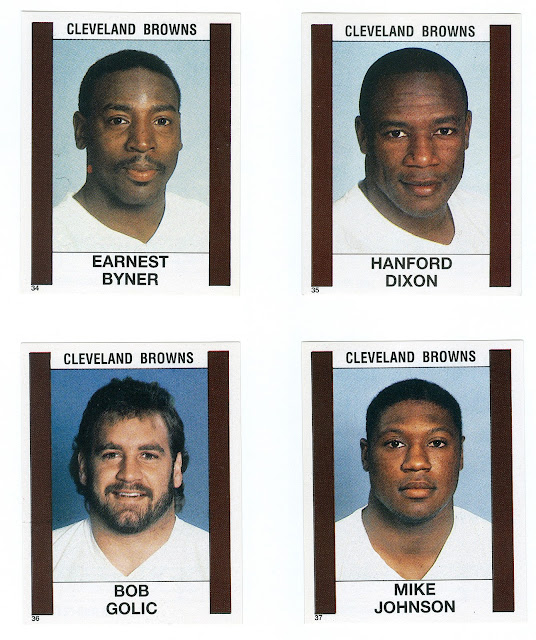 The regular player stickers are numbered alphabetically in each team's page, so here are the first four Browns players in this set.

Hanford Dixon was a Cornerback that played his entire nine year career with the Browns from 1981-1989. He created the Dawg Pound in 1985 with fellow cornerback Frank Minnifield. Dixon made three Pro Bowls, and was a two-time First team All-Pro.

Bob Golic was a Nose Tackle for the Browns from 1982-1988. A three-time Pro Bowl player with the Browns, after retiring from the NFL he was a regular cast member of "Saved by the Bell: The College Years".

Mike Johnson was a Linebacker for the Browns from 1986-1993, making two Pro Bowls during that time. 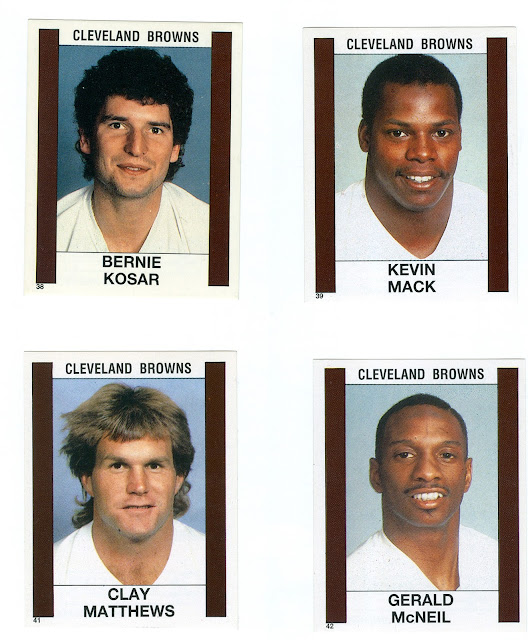 Bernie Kosar was the local boy (from Boardman, Ohio) made good. Three times he brought the Browns to the AFC Championship only to lose to Denver. He played for the Browns from 1985 until his surprise release in 1993. Many Browns fans have not forgiven Bill Belichick for Kosar's release.

As I mentioned above, Kevin Mack joined Earnest Byner in rushing for over 1000 yards in 1985. A two-time Pro Bowl player, he played his entire NFL career with the Browns from 1985-1993.

I am a firm believer that Clay Matthews should be in the Hall of Fame. Son of former 49er Clay Matthews, and father of current Packer Clay Matthews, he played in four Pro Bowls, and was a three-time All Pro Linebacker that played with the Browns from 1978-1993. 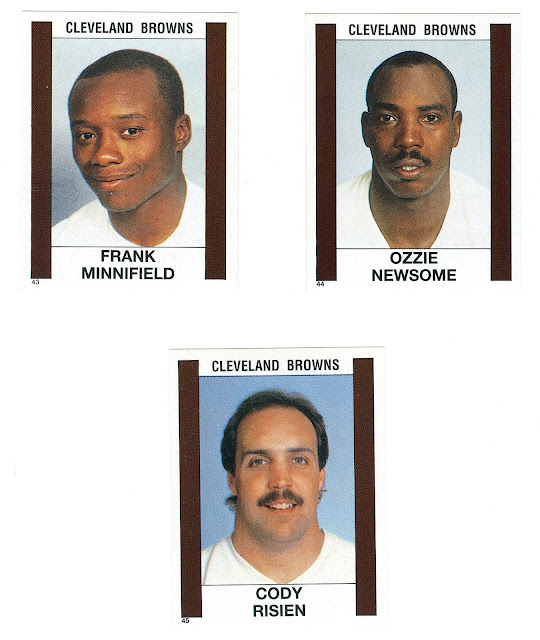 Frank Minnifield was the Cornerback opposite Hanford Dixon for most of the 1980s. A four-time Pro Bowl player, he spent his entire career with the Browns from 1984-1992.

Cody Risien played eleven years with the Browns from 1979-1989. A 7th round draft pick, he started 10 games in his rookie season at Left Guard before starting every other game he played in his final ten years at Right Tackle. He went to the Pro Bowl in 1986 and 1987.

We'll finish off with the Browns All-Pro sticker from the set. 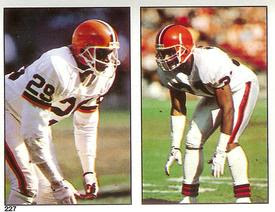 Finally, both Dawg Pound Cornerbacks shared an All-Pro sticker in the middle of the sticker book. It makes for a good way to finish this post. Woof! Woof!