As I mentioned in a previous post, my final stop at Showtime Sports Cards was a brief stop between dropping my sister off at the airport, and heading to an Arizona Fall League game.


Along with the football cards that I've shown, I went through two rows of a Mets monster box just trying to grab some cards to use for my Opening Day Starting Lineup Project.

I bought about 60 cards, and could use three quarters of them, so I was pretty happy with that. It was funny that I grabbed cards of players like Mike Bordick, Fernando Tatis and Lastings Milledge because I couldn't remember if they had ever started for the Mets on Opening Day or not. They hadn't.


I feel the just above freezing weather that I have outside and wonder why I don't live in Arizona with my mom. I'm getting warm just looking at this picture and remembering sitting outside for the game.


I was at the game cheering for the Scottsdale Scorpions, a team consisting of prospects from the Mets, Angels, Giants, Yankees and Phillies. Players would wear their own team uniforms but everyone wore a Scorpions cap. (It is black with a red scorpion on it. I bought one but forgot to take a picture of it for this post. Maybe I will add one in later.) They were playing the Peoria Javelinas, consisting of Padres, Orioles, Braves, Mariners and Reds. 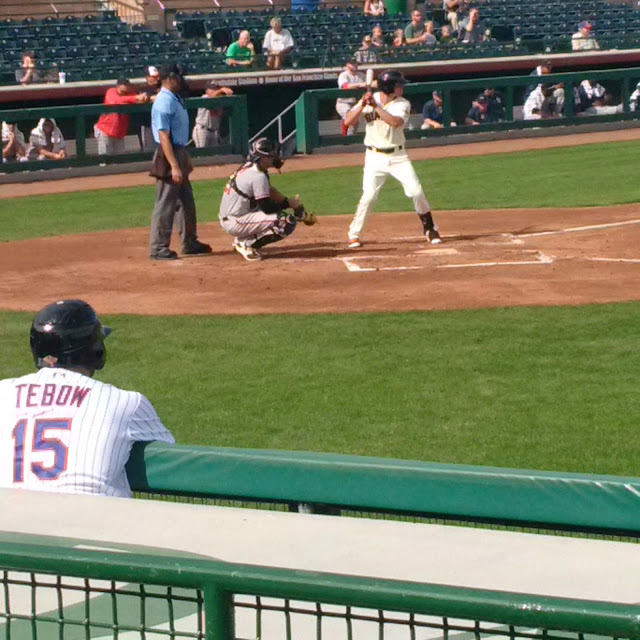 Of course, as a football fan, and a Mets fan, I wanted to see Tim Tebow. I had read a lot of reports on his play, but wanted to see him myself in person.


Tebow singled up the middle in his first At-Bat. 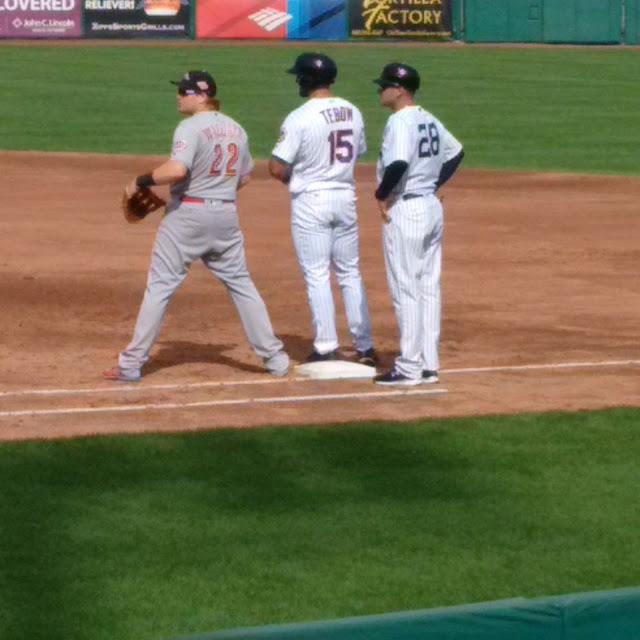 I took this shot because the First Baseman is Chad Wallach, son of Tim Wallach who I saw play in Montreal many times. Wallach made a few really nice defensive plays at first.


Tim Tebow batted twice, reaching base the second time on a Fielder's Choice - he beat a double play ball out at first. He then tried stealing second with a little bit of an awkward slide, and was thrown out. He reached for his knee a bit as he stood, and after a discussion with a trainer was removed from the game.


Tickets were General Admission seats and only $8.00. The announced crowd for a Monday 12:30 game was 504 people. But, man, do I wish I could have attended more games. I'll have to consider visiting my mom in the Fall more often.


Another Mets player in the game that really impressed me with his speed was Champ Stuart. 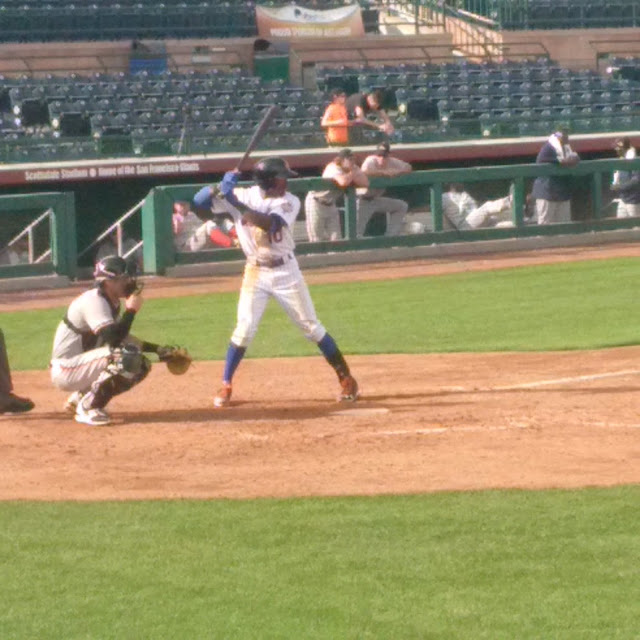 He stole three bases during the game, including second and third in the same inning. And he wears his pants/socks properly. I'll have to keep an eye on him and may drive down to Binghamton to see him next year if he starts in AA.


Anyway, here are the Mets cards that I picked up.


Cards are not always committed to any given spot, but I'll definitely use cards as placeholders to fit different years where I need a player.


The Mazzilli card is being slotted into the CF spot of 1978, and the Howard Johnson into the 3B slot of 1985. The Foster and Hernandez cards are being used for their proper years.


The Hubie Brooks card is being placed into his RF slot for 1991, while the Vizcaino goes to the SS slot in its appropriate year of 1995, completing that year.


Both of the bottom cards are being used for the set from a year earlier, Johnson for CF in 1996 and Olerud for 1B in 1997. It could be that the card pictures were taken from those seasons.


The Butch Huskey card is going into the 3B slot for 1997, while the Lance Johnson card goes into CF of the same year. I really like the Topps Gallery card.


The Brian McRae card fits into CF of its proper year of 1998, while the Derek Bell card slots into RF for 2000.


I can see that I would really enjoy the Upper Deck Vintage baseball cards too. Great photo.


Filling up the P and SS page of the 2002 starting lineup are the Leiter and Ordonez cards. The Floyd (LF) and Cedeno (CF) cards are being used for the 2003 page.


These cards are being used for Jeremy Burnitz as the starting RF for the 2003 team that also had Ty Wigginton at 3B.


The Kaz Matsui card is also going into 2005 at 2B, while the Lo Duca card slides in the Catcher position for 2006. I recognize the Co-Signers design from football sets.


A couple of Allen & Ginter cards for the 2007 lineup, with Reyes at SS and Alou in LF.


The top two cards jump into the 2008 starting lineup page while the bottom two go into the 2009 page. I really like the way the Upper Deck Spectrum card scanned.


The box had quite a bit of Allen & Ginter that I grabbed. All these cards are being used in their proper year.


A nice shot of David Wright. Although I would like to see it as a close up, I think it works fine in this set.

Went a little out of order with this scan. I'll be slotting the Lucas Duda rookie card into the 2016 starting lineup spot, while the Reyes card will go into the 2011 page. The bottom two cards slid into the 2012 lineup page.


Again, I like how the Davis card looks in the scan.


All in all, this brings my project just over the 50% mark. It is something fun, simple and cheap to do for now.
Posted by Angus at 19:00