Continuing on the cards that I picked up from Showtime Sports Cards in Tempe, the following are cards that I found while digging through a handful of monster boxes labelled "Football".


About a wall and a half of the store is lined with shelves that contain monster boxes. The baseball monster boxes are sorted by teams, the others seem to be sorted by sports. Elsewhere there were boxes of cards that were marked as dollar boxes (or 12 for $10).


The big flaw to my going to this store was that I didn't have a wantlist with me, or a list of my collection. I had my tablet, but there was no Wi-Fi to access. I was going to be operating by memory as to what cards I had or needed. I knew that I would wind up with some doubles, I just hoped it wouldn't be too bad.


I had about two hours to spend before I had to leave to meet friends for dinner on Friday night. I can't remember how many monster boxes I went through in that time, but I know there were plenty more that I didn't get to that I will have to look at on a future visit to my mom in Arizona, likely at Christmas.


I ended up pulling just over 100 cards from the monster boxes, and upon getting back to my mother's place and checking them off against my collection, I found that I needed just under a third of them. I think that I was given a price of just under $0.15 a card ($15 for the lot), so the ones that I needed came out to around fifty cents each, which I am fine with.


Let's take a look at these new additions to my collection.
﻿
See Porky Pig? Browns card.


The best Hallowe'en costume that I ever saw was a guy that dressed up as Pepé Le Pew and acted out the part with every black cat he came across. Think about it? How many black cats do you see women dressed up as at Hallowe'en parties? Yeah. And they ate it up! Even those there with their boyfriends. Man, I wish that I had thought of that.
﻿
I know that I haven't read the whole story from the various cards, but I'm slowly whittling my way down the ones that have Porky in his Browns uniform.


This was interesting to find. I'm always thankful to people that saved their contest cards from various sets. This is the first of the five Vinny Testaverde cards to join my collection.


If you want to read the rules for the contest, here you go: 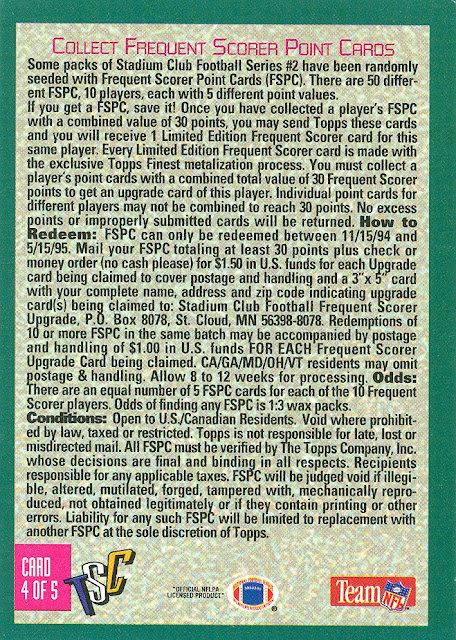 According to the records that I keep on the Trading Card Database, I already own the redemption card for Testaverde.


I knew that I needed all three of these cards when I looked at them, but I had no clue that the Mark Rypien card even existed. It was a pleasant surprise.


These are the only cards that I found that I needed from the old Browns. The rest are from after the Browns returned in 1999.


Are these supposed to represent the computer age for Y2K? I'm not sure, but they don't have the most attractive backgrounds. The photos are fine, the printing on them is great and easily readable, but that background. Ouch.


Here are two players that are linked together with the expansion Browns. A lot was expected of them after their rookie seasons as you can see on the back of Kevin Johnson's card. 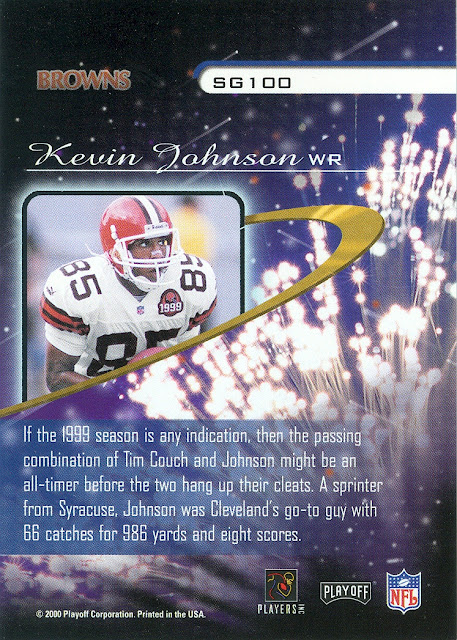 Also from 2000 were these double-sided cards that I had no clue were double-sided until I got them home. I hope that I didn't miss some other cards with a Browns player on the back.

Now, as you can see, the Errict Rhett to the left makes that card a Browns card on both sides. The Northcutt card shares it with a Bronco. From looking at a checklist online, the Momentum set definitely has at least one Browns player on the back side of the card. I'll have to be more aware of that in the future.


Along with D'Qwell Jackson, here are some cards of various players the Browns have had on Offense over the years. (I was going to say offensive players over the years but thought that could be misinterpreted.)


Here is another card that I had no idea existed. The funny thing is that I already had a Tim Couch card from the set, but I wasn't aware that there were two other Browns on split cards with players from other sports. Now I'm missing Andre Davis with Rick Nash of the Columbus Blue Jackets.


Charles White won the Heisman Trophy in 1979, and was drafted with the 27th pick in the first round of the NFL Draft by the Cleveland Browns.


In four seasons with the Browns he rushed for just under 1000 yards, and he was released before the 1985 season. He has admitted to having a cocaine addiction during his period with the Browns.


Following his release from the Browns, he signed with the Los Angeles Rams where he played for his old college coach and led the league in rushing in 1987.


Although I can see why I forget about his as a Browns running back, as one of their draft picks cards of him in his college days belong in my collection.