A while back I bought myself a box of 2018 Topps Heritage. Although people have probably already seen most of what they want, I figure I'll show the whole box pack by pack, and split it over two posts.

Looking at the write-up on Cardboard Connection, it looks like I should find:

On top of that, the odds say that there should be 8 short prints in the box (1:3 packs).

Two Mets in my first pack, although only one is on a Mets card. The blurred background on the Jay Bruce card seems odd compared to the rest of the pack - a game photo instead of a posed one?

The first Deckle card in the box is Mookie Betts.

The players look like they were superimposed onto the backgrounds. I would love the backgrounds if they weren't so empty. There are no signs of anybody else on any of the cards. I don't like that.

Well, the Zach Davies card shares the same number with the Ohtani short print. Not the card #17 I was hoping to see, but it is still early. Davies also has the same blurred background as Bruce.

I've found my first Baseball Flashback insert, from an insert set with a really nice checklist.

I always liked league leader cards as a kid so am happy to seem them in this set.

Martin Perez is my first short print out of the box.

I'm sure that Night Owl would be happy to see two more Dodger cards in this pack, after being shut out in the last two.

I'm surprised that it took this long to get my first Yankee solo card.

I don't see anyone blurred behind Howie Kendrick. Why did they have to blur the background?

I like Tulowitzki. Too bad he can't stay healthy.

There is my first New Age Performer insert.

The Scooter Gennett card is the second short print from the box.

I don't know if I'm different than a lot of collectors, but I've always liked multi-player cards. Having them for rookie and league leader cards is fairly traditional, but in football cards I always loved them in Topps Total when they paired the kicker/punter, and grouped the linemen on cards. If it gets a player a card that normally wouldn't have one, I'm okay with that.

When I looked at the checklist of News Flashbacks, this Beatles card wasn't on the top of the list of ones that I wanted to pull, but it is definitely ahead of many of the others on the list. I think I'll have to find a copy of the Sesame Street insert.

I'm glad to see the Mets rookie card. Actually, this is quite a pack for rookie stars cards.

My second World Series card in the box - both of them Dodger wins...

Back to back Machado cards, and Alex Reyes is my third short print of the box so far.

And Bryant is my second Deckle card.

Christian Arroyo gives me my four short prints that I should find in the first half of the box.

I love the feel of the Heritage cards, and I enjoy the 1969 look of these cards, but hope I find more Mets in the second half of the box.

According to the box information at the beginning of this post, and the short print odds, the second half of the box should have my autograph or relic, as well as the second New Age Performer, my Then and Now insert, and four more short prints. We'll see what I found in my next post.

Some baseball packs for Opening Day

Since I'll soon be adding a new starting nine to my Mets opening day starting lineup project, I figured that I would buy a few more baseball packs to see if I could give myself some cards to choose from for this year.

I stopped in at the Wal-Mart in Ogdensburg, NY when I went down to pick up my mail the other day. I picked up two of the 24 card packs of Topps Opening Day, and one of the Topps Gypsy Queen packages that comes with three packs and 5 green parallel cards. 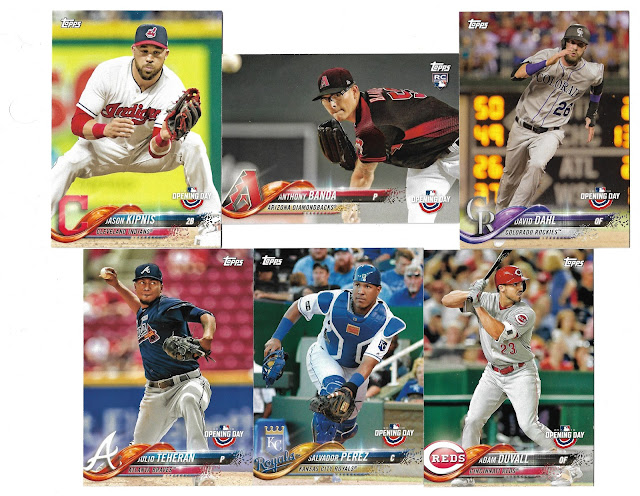 I don't know the Topps Series One cards to know what is new, and what isn't. I've said it before, I'm a former catcher so I'm biased in liking the Perez card. 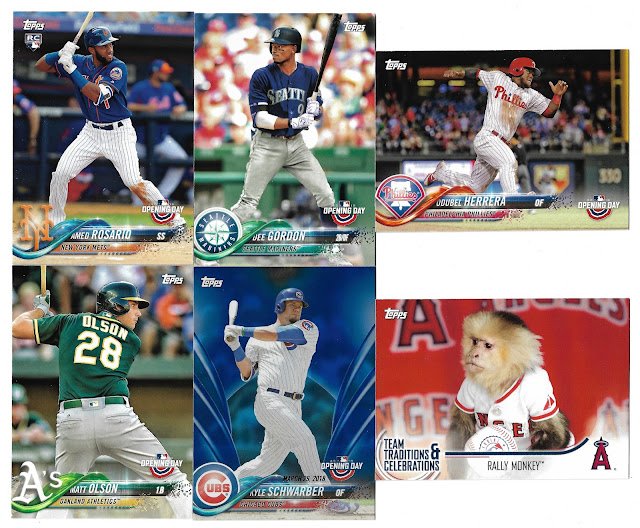 The packs said that I would get three inserts per pack, and they were in the middle with the first one appearing here in the rally monkey.

I was surprised to see the blue foil Schwarber card. The date popped out at me as I first looked at the pack. Really, at first I thought it was just one of the inserts. The blue looks good surrounding the white Cubs uniform. 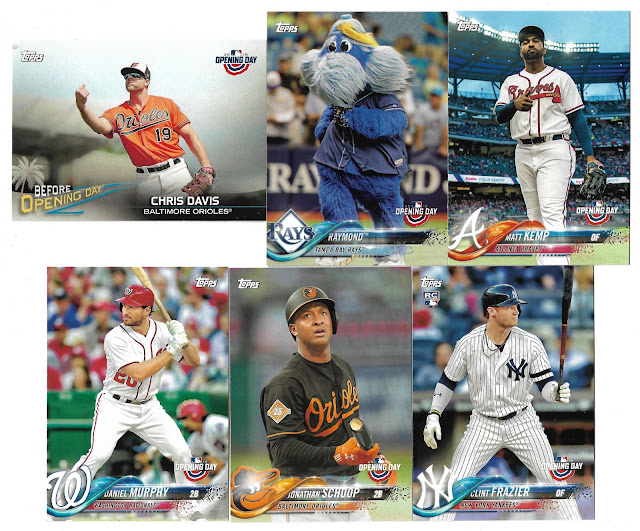 And my other two inserts. I can't say that I had even the slightest clue about a Rays mascot before pulling this card.

I know some players got updated uniforms for the start of the set but I guess no photos exist of Matt Kemp in a Dodgers uniform. I guess that growing up in Canada, I was used to O-Pee-Chee acknowledging player movement to new teams even if the player was in his old uniform. 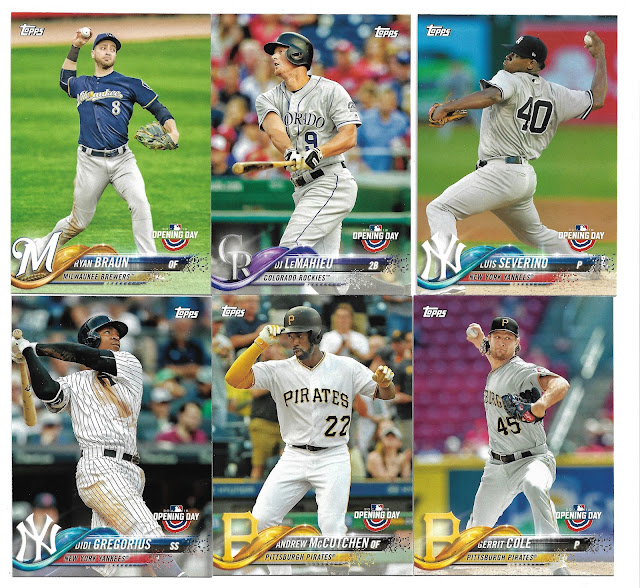 Last calls for McCutchen and Cole in Pirates uniforms. 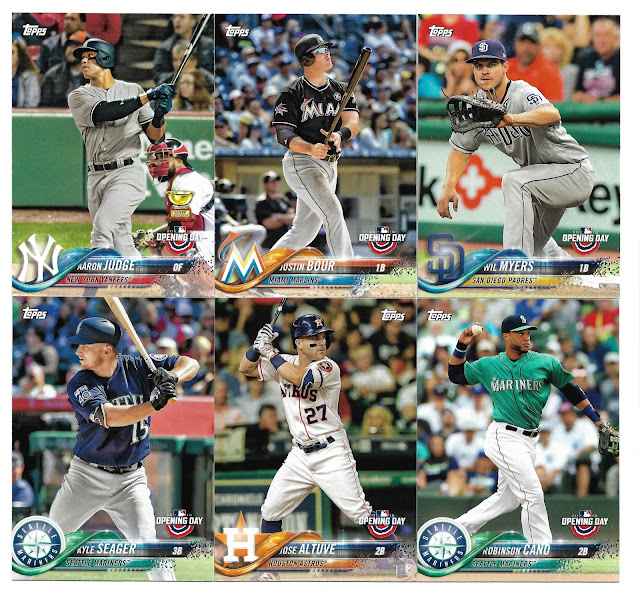 It doesn't really fit into my sometimes old-school thinking, but I like Bour's shades on his card. I also love the photo on the Myers card.

Speaking of old-school, I hate seeing the players' pants dragging along the ground when I watch a game. I want to see the socks! I guess with the banner on the bottom of the cards I don't have to worry about it on cards. (Yes, I'm aware that Altuve's socks are peeking onto his card. That is what made me think of it.) 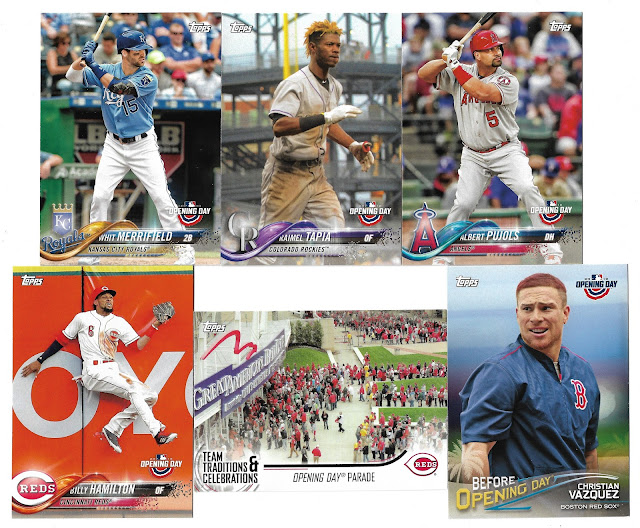 I know the Billy Hamilton card was in Series One. I was happy to get that one in the very little that I opened.

And the start of this pack's inserts. I really enjoyed my visit to Great American Ball Park last summer. I'm sure it would be fun to see the Opening Day parade. 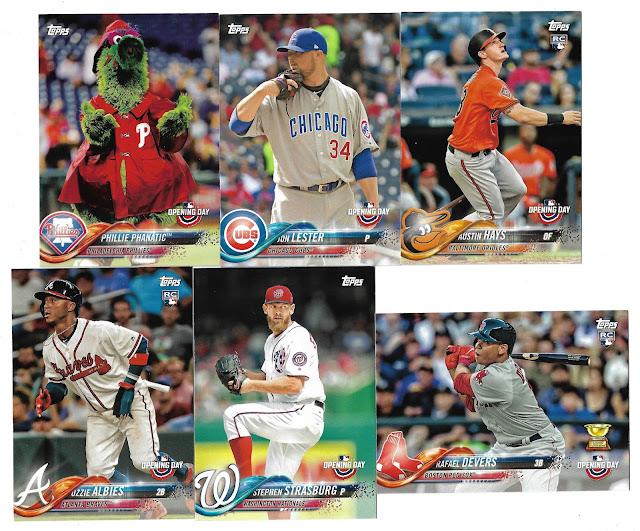 I'm a Mets fan. I hate the Phillies. No surprise there. But, really, I have a soft spot for the Phanatic. I grew up seeing Youppi! in Montreal, but remember hearing a lot about the Phanatic as a kid. Mascot antics can bring a smile to my face.

I also hate the Nationals, partly as a division rival, but partly because I wanted the Expos to stay in Montreal. I do appreciate a lot of their talent, though, and do like Strasburg showing that he's wearing his pants and socks properly. 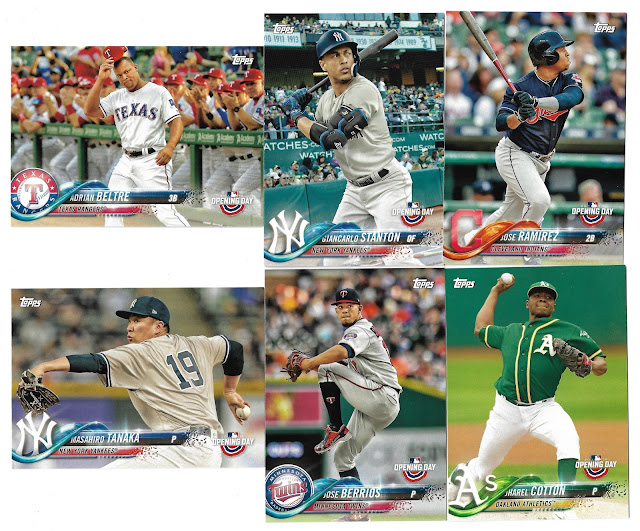 I think I saw that Night Owl found the original Marlins photo for Stanton's card. Glad to see Topps catering to the Yankees fans to update this card.

Ah, well, only the one Met card, but fun cards to open.

Now, to look at the Gypsy Queen cards that I picked up. 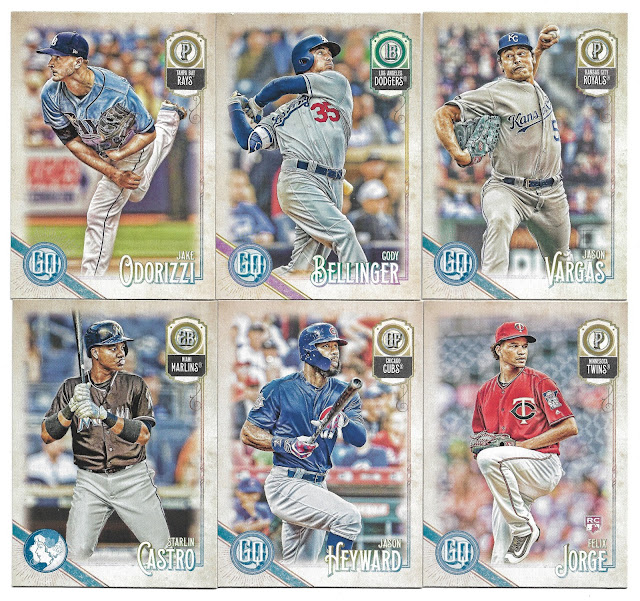 Well, I got a Met in a non-Mets uniform. That doesn't count for me though.

I didn't notice the logo on the Castro card when I first opened the pack - only when I saw the scan.

I like the cardboard that these cards are printed on, but I don't think they are very attractive cards. And the backs don't appeal to me having just a small write-up and no stats on them. 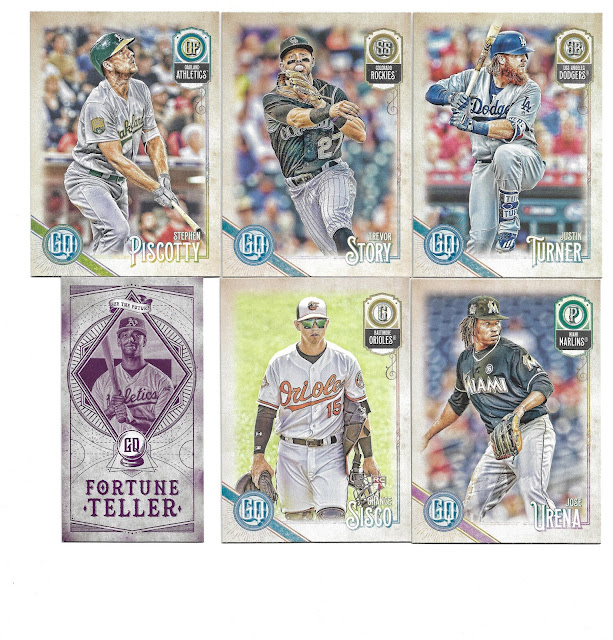 Wow, horrible job with this scan. How did I leave such a big blank bottom margin here? Oh, well, I'm too lazy to fix it now. 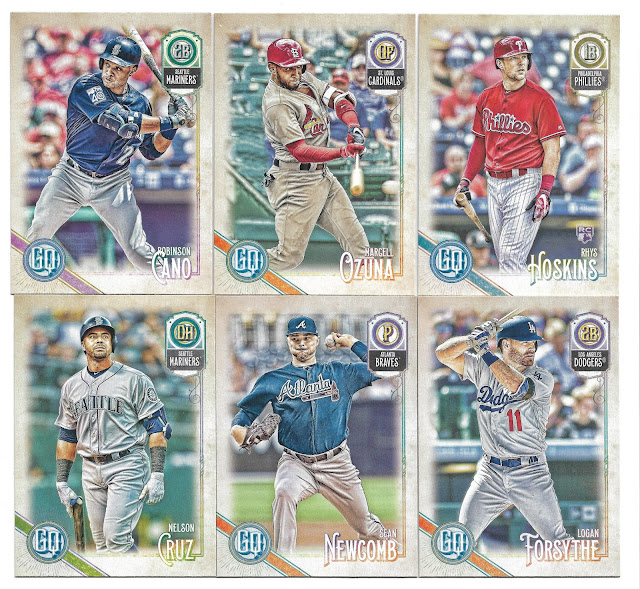 No bubbles here, but Newcomb doesn't really have a good pitching face.

No Mets in any of the three packs, but I still have my five green cards to find some. 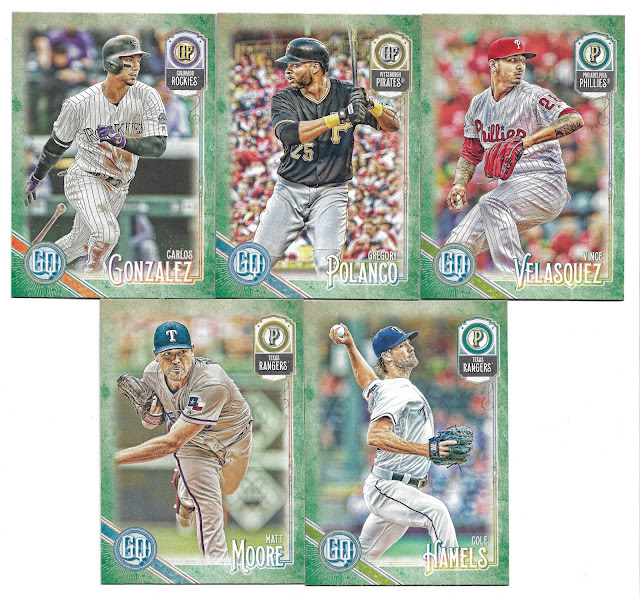 Nope, no Mets here either.

After winning the Willinghammer Rising World Cup of Trading last year, and I think as a Canadian I added part of the world to the World Cup, along with cards I received from Wes, part of the prize I received was money in my paypal account.

Since I've seen that Wes is a big hitter in his various trade wars, I decided that I wanted to honor his reputation and use my winnings to splurge and try to buy big cards that I have wanted over the years. I had a few ideas in mind, and periodically did searches to see if I could find any of them at prices I wanted to pay. One card on a recent search caught my attention. 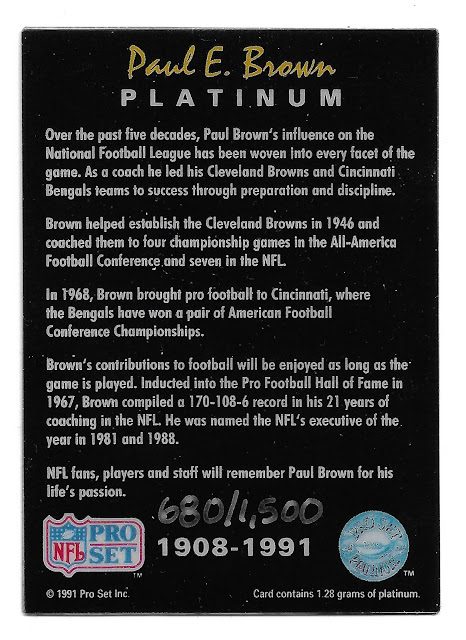 Although it is numbered out of 1500, I only remember seeing one in person before - in a case at a card show with a price that was way more than I wanted to spend. I didn't manage to actually hold the card.

This card that I received is interesting in that it appears to be shrink-wrapped. You can kind of see that on the sides and corners of the card's front scan. I don't know if it came like that originally, or if the seller did that, but the card in its shrink-wrap fits in a one-touch case so it is fine with me. The white specks on the scan are either on my scanner or on the outside of the wrap and picked up by the scanner. I don't notice them when looking at the card in hand.

It is great to add a card to my collection that I have wanted for so long.
Posted by Angus at 03:04 6 comments: