Continuing my belated thanks to bloggers that have sent me cards recently, I thank Mike at Not Another Baseball Card Blog.


A long time ago, Mike posted that he had some extras of a 1993 Expos set available. I decided to take him up on one of the cards. 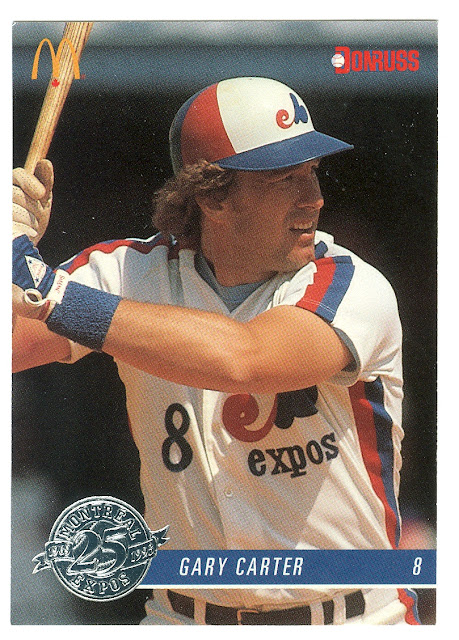 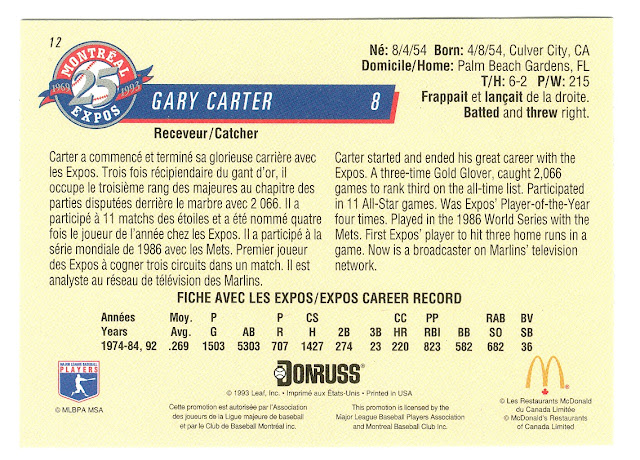 It never hurts to get a baseball card of my favorite player.


Nice guy that he is, Mike also included a bunch of Browns cards for me. 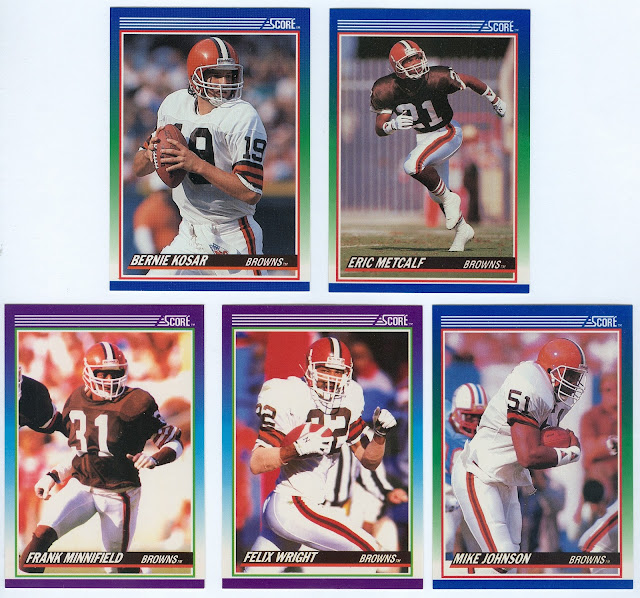 Every Browns card is appreciated even if I already have them. It is just fun to look in an envelope and have memories of the various players and cards.


The 1990 football season, represented by the Score cards above, was the first season where NFL cards seemed very easy to find in Ottawa. I mean, with Pro Set and Score entering into the picture in 1989, I was able to find some then, but in 1990 they seemed to be everywhere! It was great! 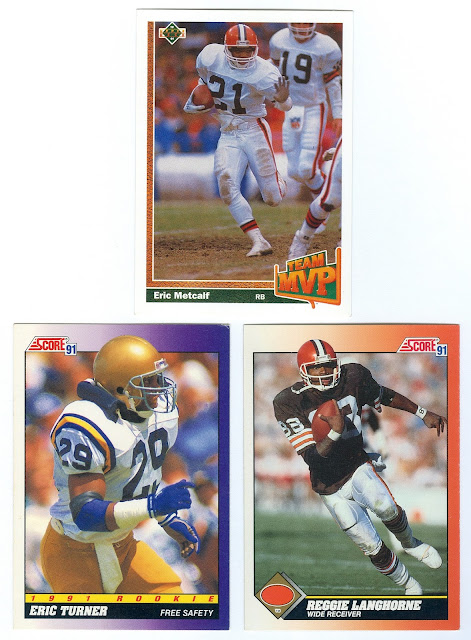 1991 was the year that I moved out of my family home and in with roommates. One was a fellow card collector. We hit so many shows, and bought so many 1991 football cards.


There were five of us living in the house, and we were all football fans. As much as the late 1980s teams were the Browns glory years of my lifetime (and yes, I'm aware that this is a very, very sad statement), with collecting, and subscribing to the Browns News Illustrated newspaper, this is when I really started following the team. Before that, all I really had to read regarding the NFL was a football magazine at the start of the season, and whatever was reported in Sports Illustrated. 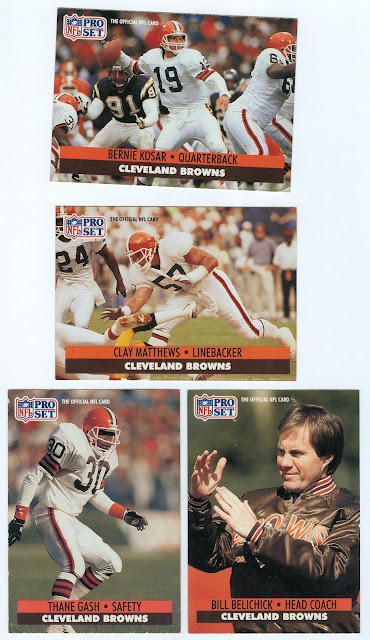 I'll admit that during Bill Belichick's first couple of years coaching the Browns, I didn't understand what he was doing. When he cut Bernie Kosar, I was up in arms. However, he had really straightened out the team, and I think they were set up nicely for the future (first in the division) when the news broke that the team would be moving to Baltimore. The team collapsed, and Belichick was let go before the Ravens went to training camp for that first season.

A fun item that Mike also provided me with was one of those Pro-Set Collect-A-Books. Since we've probably all seen the outside of them so many times, I've scanned the inside so you can see the whole thing. 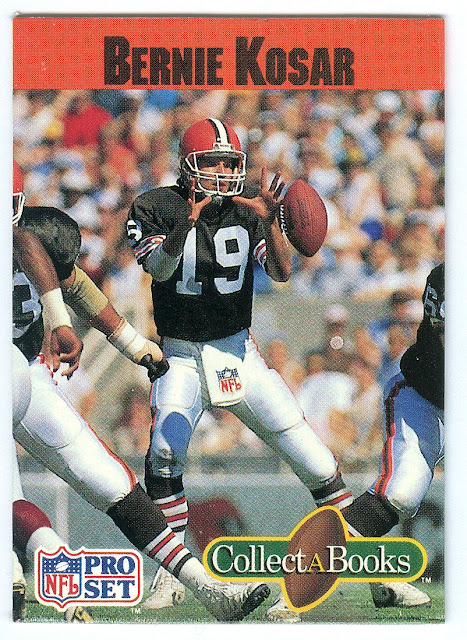 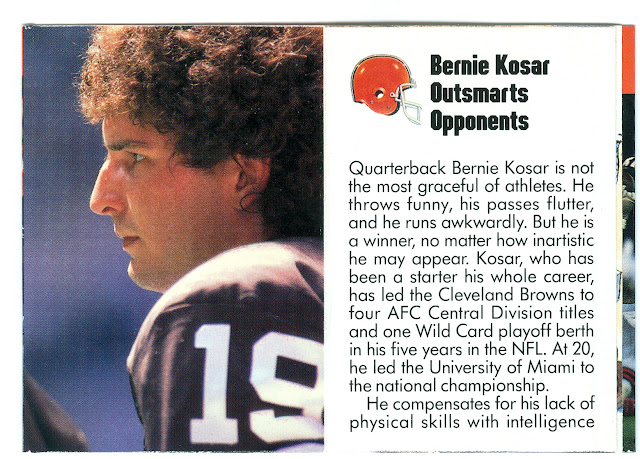 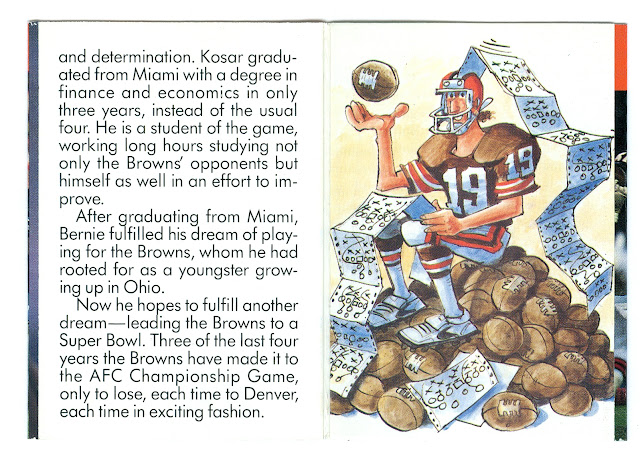 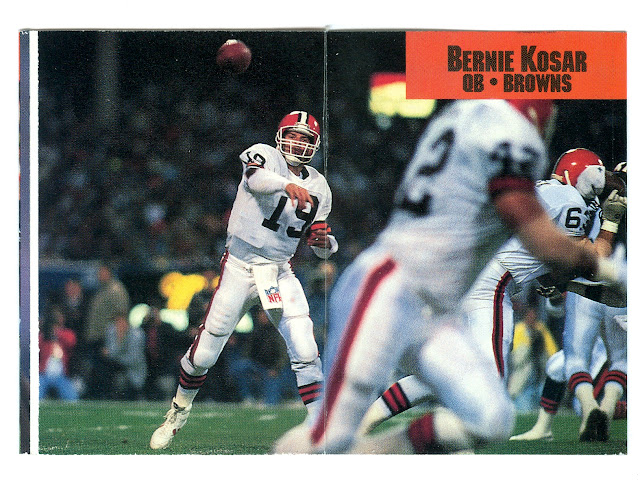 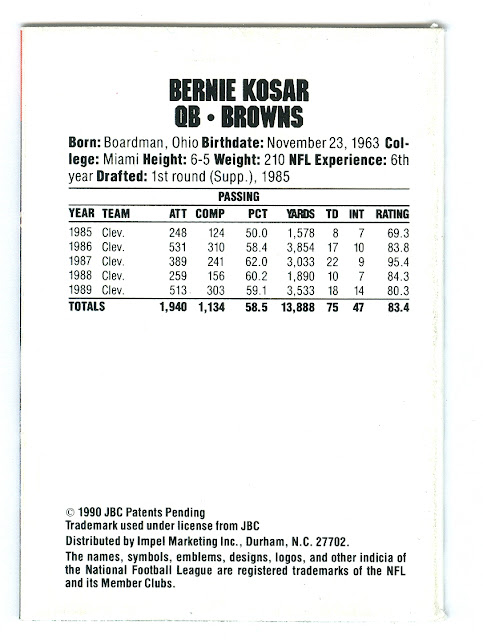 Thanks, Mike, I really enjoyed the cards! Sorry about the delay in posting about them.﻿

Some Penny Sleeves to think about

Once again, I've neglected posting, and even worse, in thanking some bloggers that sent cards my way. Over the next few days I hope to catch up on those cards that I've received since I got back from my Christmas in Arizona.


This wasn't the first package that I received, but it allows me to start with a Jim Brown card, which I wanted to do since today is Jim Brown's 71st birthday.


This package comes from Jon at A Penny Sleeve for your Thoughts.
Happy Birthday to the greatest running back to play the game!

I love the thickness and feel of this set, although the card doesn't scan great and the inset photograph of the head does not look as good as it does in person. I'm always happy to get a Clay Matthews card, he's one of my favorite players and should be in the Hall of Fame.


The scan is bright like a refractor but doesn't really show the colors that show up when I shine a flashlight at it. I needed the refractor for my collection, but sadly, since the card isn't numbered as a refractor on the back, I may have owned the refractor in the past. I may have to dig through doubles for the other cards in the set to see if I do actually have the refractors.


The main reason Jon reached out is that he said that he had some Mets for my Starting Lineup project.

Jon apologized for the condition of the Boyer card. No worries! It look great to me!


I love getting the Mets Maulers card, and though I may eventually replace it with a solo card of Ron Swoboda, it will always stay part of my Mets collection.


I think that the Fregosi card will always keep his 1972 slot. It still has him in his Mets cap, but is part of a wonderful subset.


Thanks for the great cards, Jon, and when I get my act in gear, expect a return package.
Posted by Angus at 18:57 2 comments: