After receiving a Leaf Certified - New Generation Jersey card of Corey Coleman from Matt in his trade shipment recently, I noticed that there were two other Browns represented in that insert set, Ricardo Louis and Cody Kessler.


I looked on eBay, and saw a seller with one at a good price so I decided to take a look at his other items to see if I could combine a bunch of cards to combine shipping. He did, and for around the cost of a blaster, here is what I bought.


Here is the card that started it all. Louis only received one target last weekend versus the Steelers, after none the previous two weeks. He is getting over a hamstring injury, and having his playing time reduced after Corey Coleman returned from his injury.


I am now up to 230 different Braylon Edwards cards in my collection, making him third behind Tim Couch and Kevin Johnson. Still plenty more out there of all three players to find. I miss Fleer and their various sets and inserts.


I have 9 different Billy Winn cards, seven of which use this photo - the main Topps card along with this Gold parallel, and the Topps Chrome card along with four parallels.


I didn't realize that Terrance West had passed the century mark in my collection. He is now up to 104 different cards, ranking him 18th in my collection. With only two years worth of cards he is way ahead of a lot of longer tenured Browns.


I might as well continue looking how many cards I have of each player. I only have 26 cards of Brian Hoyer, ranking him tied for 93rd with Otto Graham. I guess that not being drafted by the Browns limits all those rookie cards to chase and keeps the numbers down even though he is a quarterback.


Manziel, on the other hand, is tied with Eric Turner for 11th on my list with 116 different cards. I think he'll keep climbing that list.


I really like both of these cards. Both are thick. Based on other cards that I own of it, I'm not generally a big fan of the Spectra set itself but the Gold Prizm really stands out when you see it in person.


This is my first Panini Immaculate card, and it is appealing, but I'm not going to buy the really expensive six card boxes for the high-end collectors (speculators?). I'm happy enough to pick up the cheap, disappointing remainders from them.


I've just started collecting Ogbah cards so there is no point in looking his stats up, he'll be quite low. However this is my 53rd Duke Johnson card, putting him 50th in my collection, one card behind Vince Mayle.


Again, this Impeccable card is the first I own from that really expensive set, but I absolutely love the front of the card. Too bad the back is disappointing. 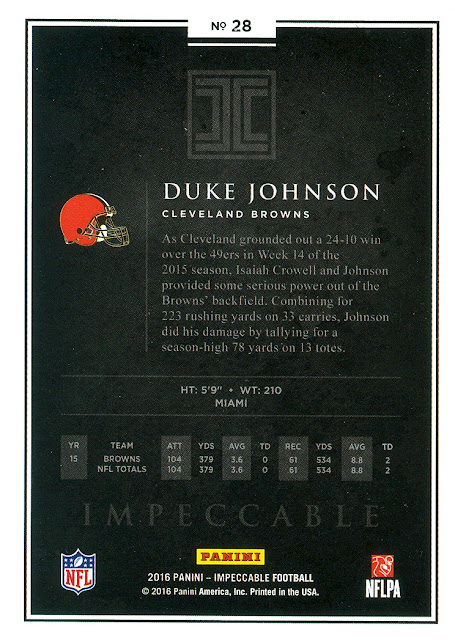 If I reduce this to the Large setting instead of X Large, I don't think you would be able to read the back. There is good information, but it is too dark and I don't find it very attractive, other than I like the Immaculate logo and that the Browns helmet really stands out on that background. Oh, well, it is only around $400 for a six card box, you can't ask for too much.


All in all, I am very happy with these cards for the price of a blaster. I know that there are probably lots of eBay sellers sitting on Browns cards that I am not aware of. I can only continue to hope that when I am looking for one card from one of them that it will lead to other great cards like these.
Posted by Angus at 13:08