Noticing that today is Bernie Kosar's 53rd birthday, I figured that I would shine a little bit of a spotlight on Bernie Kosar with cards and toys in my collection. 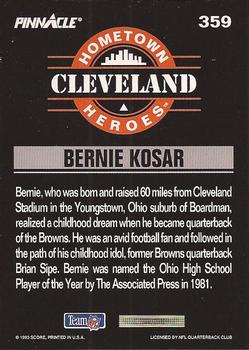 Bernie Kosar was born in Youngstown, Ohio on this day in 1963. He was raised in Boardman, Ohio and attended and played football at Boardman High School.


After Boardman High School, his football continued at the University of Miami.


In 1983, Kosar led the Miami Hurricanes to their first National Championship.


In the first, on November 10, 1984, Bernie Kosar led the Hurricanes out to a 31-0 halftime lead against the University of Maryland. Future Buffalo Bills quarterback Frank Reich then brought the Terrapins back to win the game 42-40.


The second game, on November 23, 1984, was the famous Hail Mary pass from Boston College's Doug Flutie, leading to their 47-45 win over the Hurricanes.


Combine that with the famous AFC Championship games that the Browns lost to the Broncos and Bernie Kosar has really been involved in some heartbreaking losses.


After graduating early with a double major in Finance and Economics, and after some playing the system to allow himself to be eligible for the NFL Supplemental Draft, where the Browns had traded for the first pick, as opposed to the regular NFL Draft where he wouldn't get to play for his Browns, he found himself drafted by the Browns with that first pick of the 1985 NFL Supplemental Draft on July 3, 1985.


Bernie Kosar started the 1985 season as the backup quarterback to Gary Danielson. After Danielson was injured in the fifth game, Kosar, at the age of 21, became the new starting quarterback for the team. Riding the running game featuring the 1000 yard seasons of Kevin Mack and Earnest Byner, the Browns won the AFC Central with a 8-8 record. The season finished with a 24-21 loss to Dan Marino's Dolphins in the playoffs.


The Coke / Mr. Hero cards are the only Kosar cards I know of from during his rookie season. I like oddballs so I think it's great!


I told the story in a previous post on how I got my first Bernie Kosar rookie card. I have a few of them now, and many years ago started to put together a set for 1986 Topps. I should really try to find my partial set to see how close I got, and if I can finish it.


Not a bad person to share a card with. Too bad the 1987 season ended with "The Fumble" in the AFC Championship.


I'll probably show a few oddball cards. They are the ones that people haven't seen as often, and I always get so happy when I find a new oddball for my collection.


When I first heard about these cards I was disappointed since we didn't have Domino's Pizza in Ottawa. Luckily it seemed to be during a time of weekly card shows, and I found a dealer that had acquired a bunch of the Domino's cards. I can't remember what I paid for this card, but I do remember it being a premium because it wasn't available here. It couldn't have been too bad or I would have let it pass, but I have memories of being happy getting it.


But I think I prefer his Team MVP card from the same set more.


I love the dog in the background.


Okay, this card kills me. It is obviously from the NFL Quarterback Challenge that they used to hold. But it seems to be trying to show mobility. I was hoping to find a video clip of a comedy routine that I saw, that I think was Drew Carey, that joked about Kosar's mobility. The comic would hit the microphone stand and as it wobbled, he would say that it was Kosar scrambling.


There were two oddball cards that used the 1993 Fleer card, this one and a Shell FACT card.


This is the first shiny card set that I remember.


This "Super Bowl Dreams" card has the following quote on the back:


"Every team deserves a shot at the title. I'm going to give it my all to make sure the Browns make it to the big game."

Well, Bernie Kosar made it to, and won, the Super Bowl in 1993, but with the Dallas Cowboys. He was released by the Browns during the 1993 season due to "diminishing skills" and was signed by the Cowboys as a backup to Troy Aikman. He replaced an injured Aikman in the NFC Championship game, going 5-9 passing for 83 yards and a touchdown. In a nice move, he was sent in to the Super Bowl for the final kneel-down of the game.


After the 1993 season, Kosar signed with the Miami Dolphins which led to a Browns card with a Dolphins logo on it.


See, look at the uniform, it's a Browns card.


Kosar played three years as a backup with the Dolphins to finish his career. He is credited with the idea for the fake spike that Dan Marino used to win a game against the Jets.


There have been quite a few new Kosar cards since he retired. This one is one of my favorites.


Look at the hand-warming pocket on the front of the jersey! Isn't that awesome! And the helmet really looks askew.


I only own two memorabilia cards that claim to have pieces of a jersey won by Kosar in a game.


Here is the lowest run serial numbered Kosar card that I own. 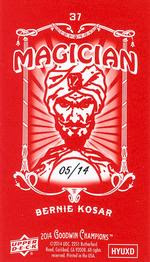 My Bernie Kosar card collection currently sits at 150 cards. This ranks 6th in my collection.


I know that I had a Bernie Kosar poster on the wall in college, and that I still have it rolled up with the rest of my posters from those days. I'm not going to show it, but I will finish with a couple of photos.