I'm skipping a post I started mid-week about Austin Davis becoming starting quarterback number 24 for the Browns since 1999. I got too busy to finish it and post it when I wanted to. Perhaps I'll modify it and post it later.

Anyway, on Saturday I went down to Ogdensburg and picked up a whole bunch of Browns cards that were waiting for me, but feeling that I didn't have enough cards (I mean, really, over 200 new cards for my collection with many autographs and inserts of various sorts, that isn't much is it?) I decided to grab a blaster of Topps Chrome at Wal-Mart while I was down there. Here is what I pulled, and my thoughts. (Please don't mind my crooked scans, I didn't spend as much time on them as I should have.) 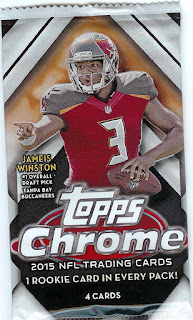 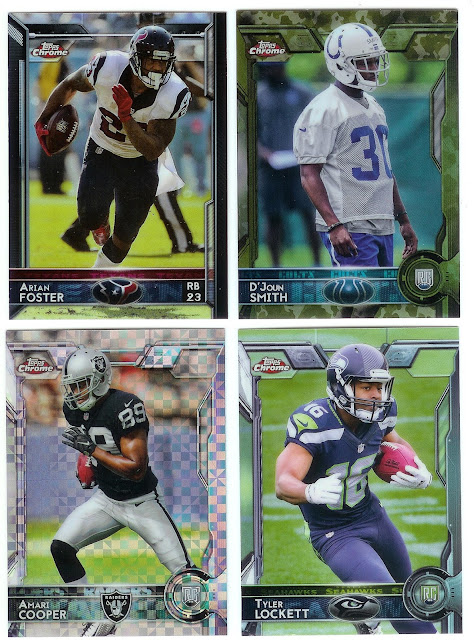 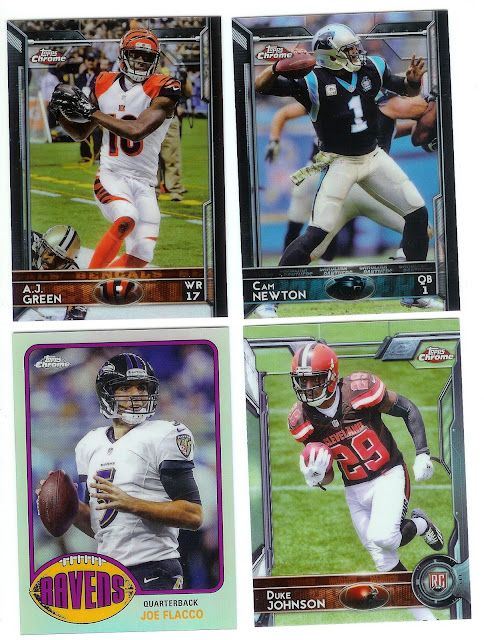 ﻿
Pack 2: As you would expect, I always want to pull Browns cards so the Duke Johnson is very welcome. The Flacco must be a refractor, and is #/99. 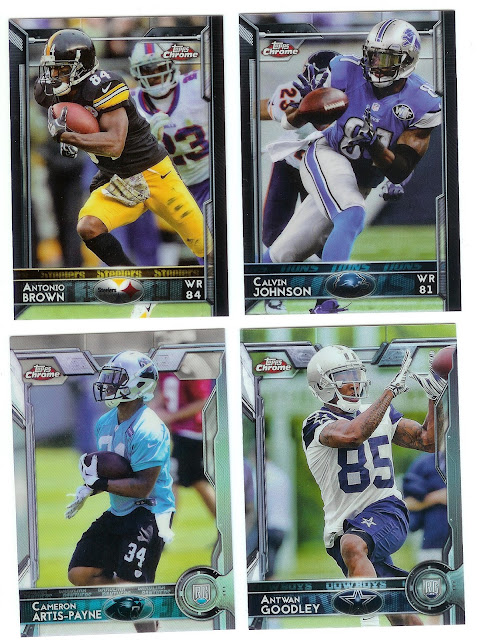 ﻿
Pack 3: The Artis-Payne appears to be a refractor, and it seems to fit in the positioning in the pack. I really prefer when they actually print "refractor" under the number on the back of the card. 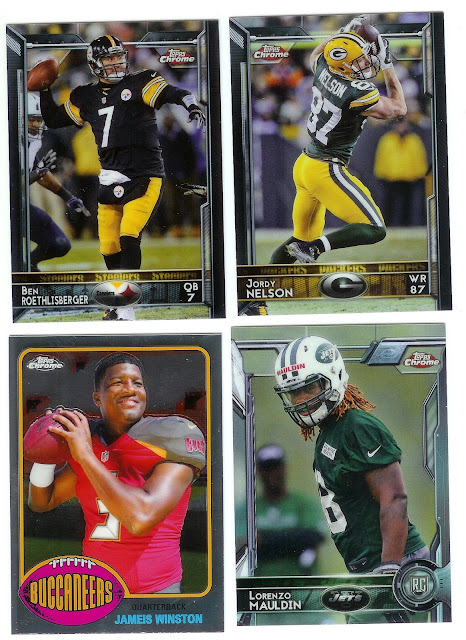 ﻿
Pack 4: The Nelson will go to a friend. I like the 1976 Winston - when I see that set I always think of the Brian Sipe rookie card. What can I say? My card collecting revolves around Browns! 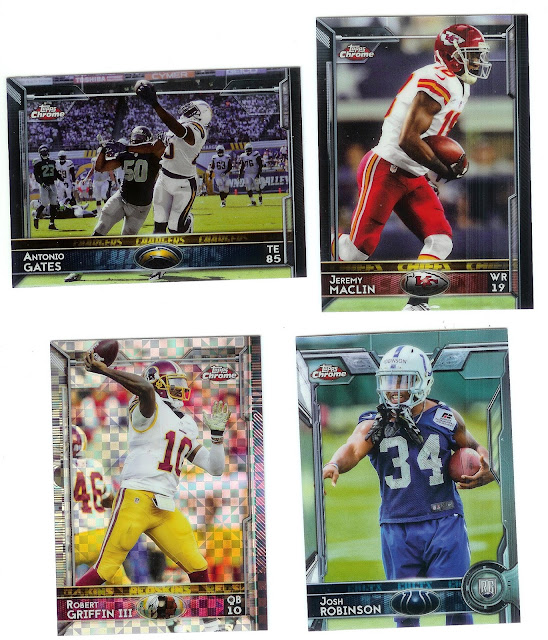 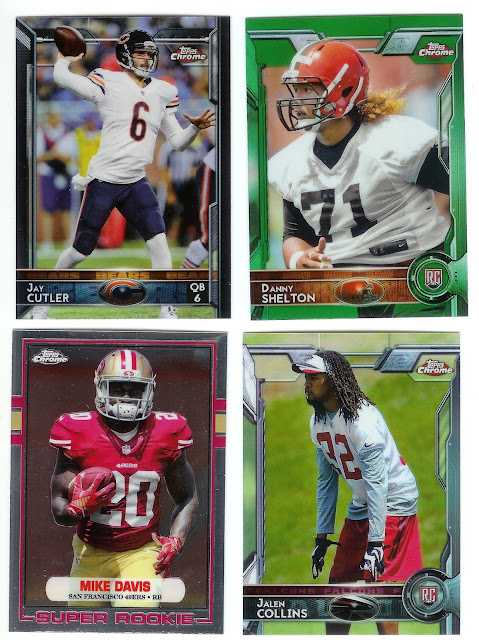 ﻿
Pack 6: I'm predictable - this is a great pack! Browns green parallel of Shelton - right into my collection. Last week I got a 89 Topps style Duke Johnson from a local card store; I was happy to pull another of the style but I'm not a 49er collector so hopefully I'll find a home for it. 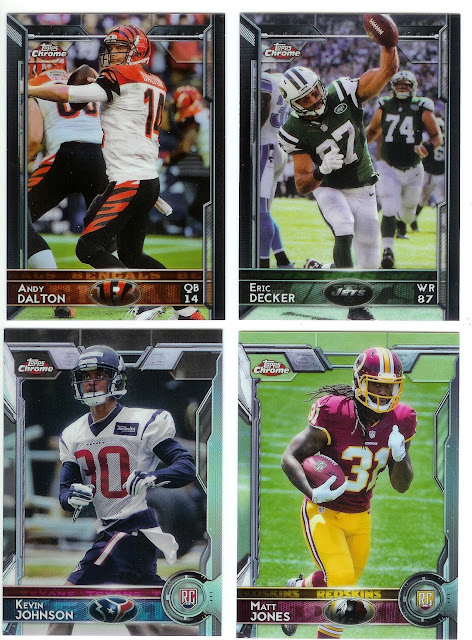 ﻿
Pack 7: Again I'm guessing the Johnson is a refractor. And as a Browns fan this isn't who I think of when I see/hear Kevin Johnson.

Each blaster also comes with an exclusive rookie relic card. 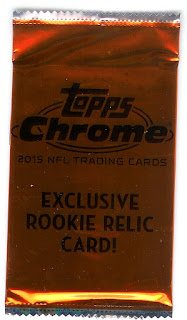 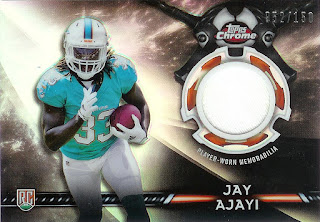 ﻿
I like the design of the card. Looking at the checklist there are two Browns that I'll have to collect - Duke Johnson and Vince Mayle. After Mayle didn't make the team out of training camp you would think that they might have changed out their checklist. How far in advance are they printing these cards. I'm sure those people pulling a Mayle insert are going to love it.

All in all, I'm glad I picked up the blaster. I know it is cheaper to just find my Browns as singles but I do like opening packs. I like this year's Topps design, and find that the chrome translates well to it but I'm not going to try to build the set. Other than what I mentioned above, any of these cards are available to trade.

Also, while at the post office in Ogdensburg I sent out about a dozen Christmas card to people that replied to my last post. I still have some more to send out and will continue to send more to any new people that contact me.

I'm sure everyone is busy during the lead-up to Christmas. Commitments kept me from watching today's Browns game. You know what? It is a lot less stressful on me to just see a score telling me they lost as opposed to watching the game and seeing how they lost. I'm not in as bad a mood as I usually am after they lose. I've got more commitments next Sunday and will miss seeing that game as well. However I will still watch them whenever I can.
Posted by Angus at 00:32