After the move to Baltimore was announced in November 1995, I lost a lot of interest in football. I didn't watch as much for the rest of the year, but I did watch the final Browns game where the fans were pulling apart fixtures in the stadium. I really didn't watch much football at all in 1996. And I really didn't buy any football cards after the move was announced. I wasn't too inclined to support the NFL and any related products.

When I got back into collecting I knew I was going to collect 1995 cards, but wasn't sure what I was going to do about 1996 ones. When I started getting some in lots, I realized that I still wanted to buy the cards where players were in their old Browns uniforms even if the cards said Baltimore Ravens.

I added around 80 cards from 1996 in my Black Friday purchases and will show about half of them here.
﻿﻿﻿ 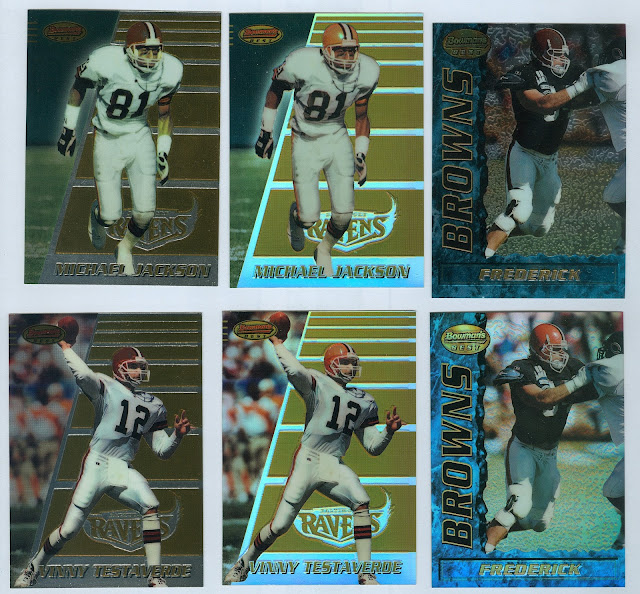 Okay, the two far right cards are 1995 - I accidentally mixed them while I was scanning refractors. I just wanted to show refractors, along with the regular cards, from 1995 and 1996. I bought more than these but wanted to pair up players' base cards with the refractors if I could. 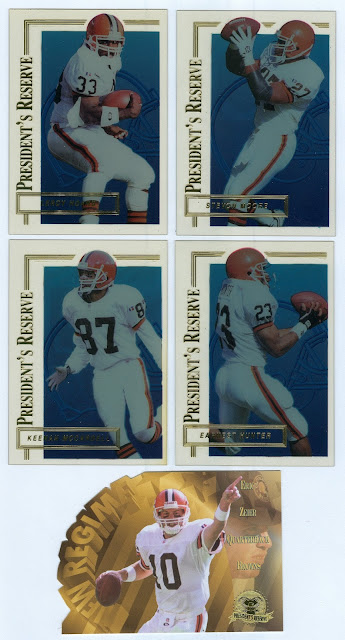 ﻿
I love the clear plastic on these Collector's Edge cards. I believe that I've now completed the Browns cards from the set. (And they identify as Browns cards.) 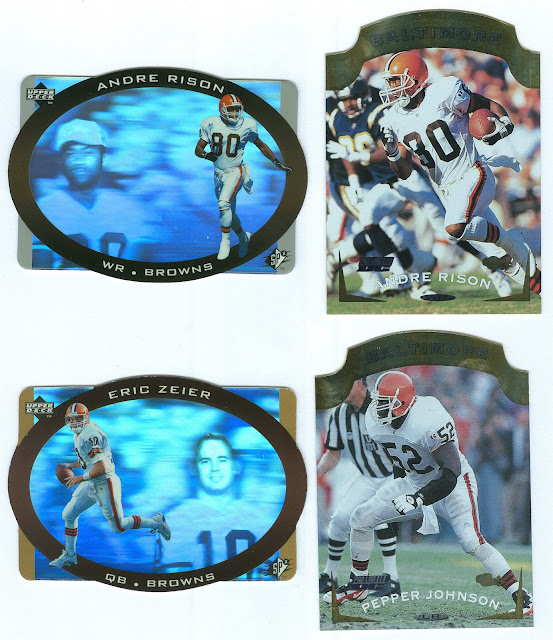 ﻿
I love the holograms, and they seem to show up nicely on the scans. The Zeier is a gold parallel.
To me the Pro Line die cuts would be better if it weren't for Baltimore written across the top. 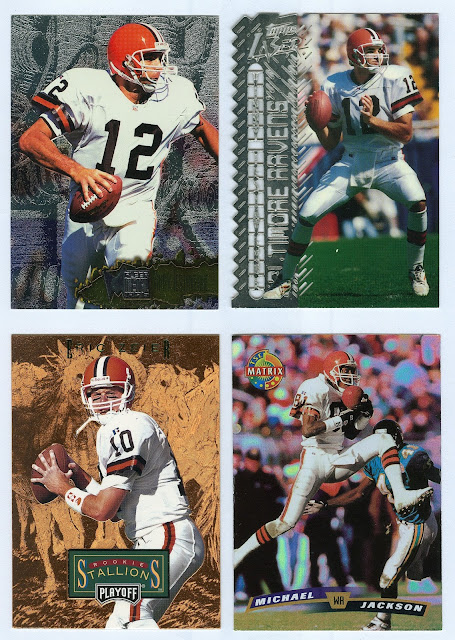 ﻿
Too bad I can't get a Topps Laser card with Cleveland Browns on it, I do like them. And then there is some shiny cards that don't scan that well. The Stadium Club Matrix card pops nicely, but the background is better when you can move the card back and forth. It has a great photo of Michael Jackson! 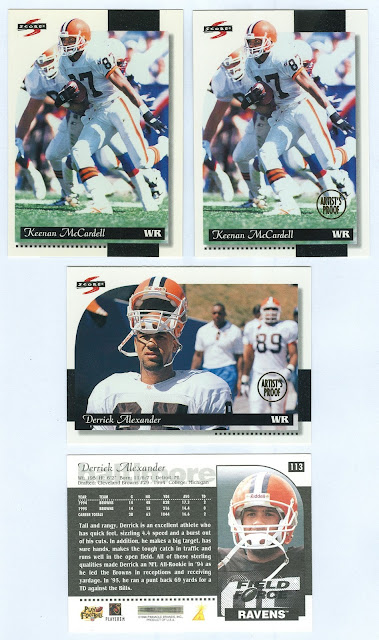 ﻿
I picked up a bunch of Score inserts, mostly Artist's Proofs, but also the Field Force shown on the bottom. It was nice to add some more Keenan McCardell cards to my collection. 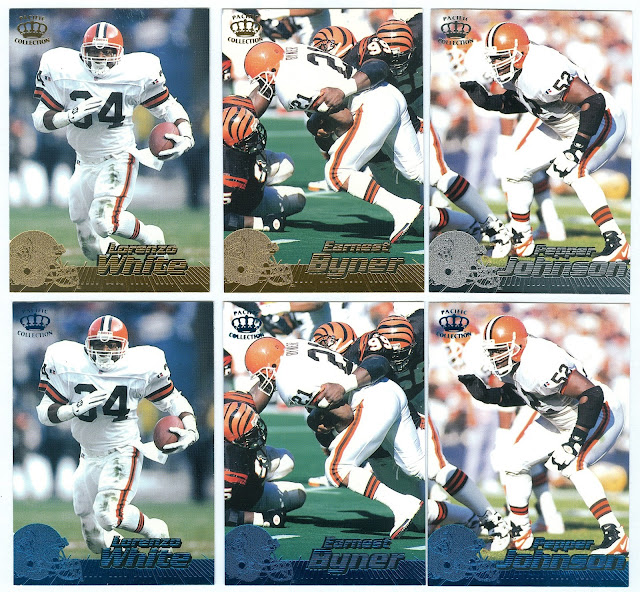 ﻿
A sampling of base Pacific cards with Silver and Blue parallels. 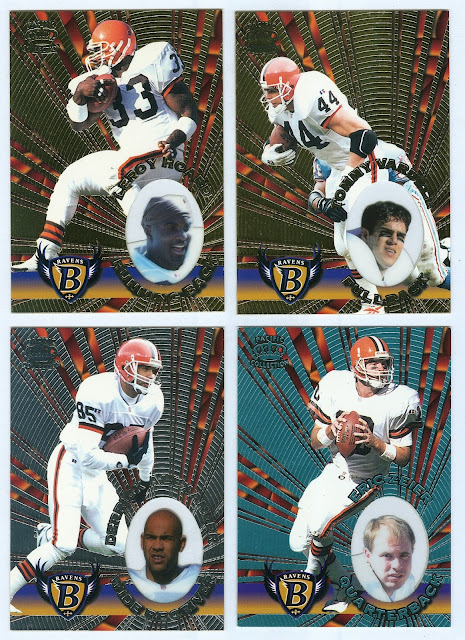 ﻿
A sampling of Pacific Invincible base cards on top with Silver and Blue parallels below. 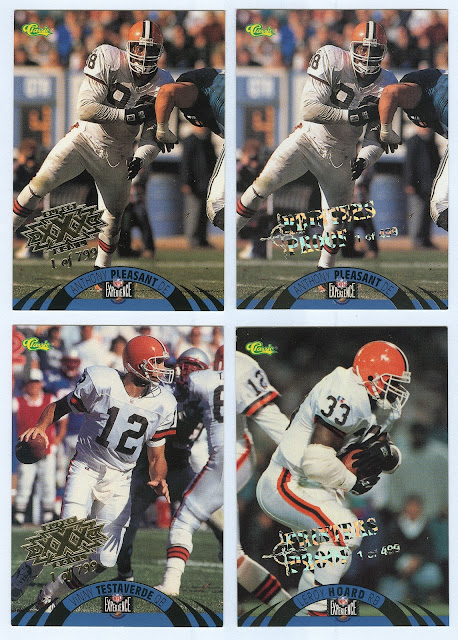 ﻿
I added two of the gold Super Bowl parallels for the NFL Experience set, with the team set of Printers Proofs. 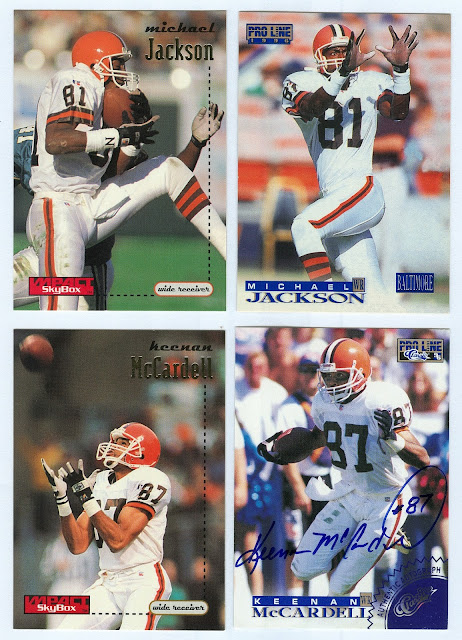 ﻿
I like the receiver photos on all three of these base cards. The Michael Jackson Skybox Impact card appears to be from the same game as the Stadium Club card above. It looks like this is after he landed.
There were two versions of the McCardell autograph in the Pro Line set. I already had the gold version (the seal in the bottom right corner) and just added the blue one for $3.45. It was one of the more expensive cards that I purchased. Keenan has a nice signature. 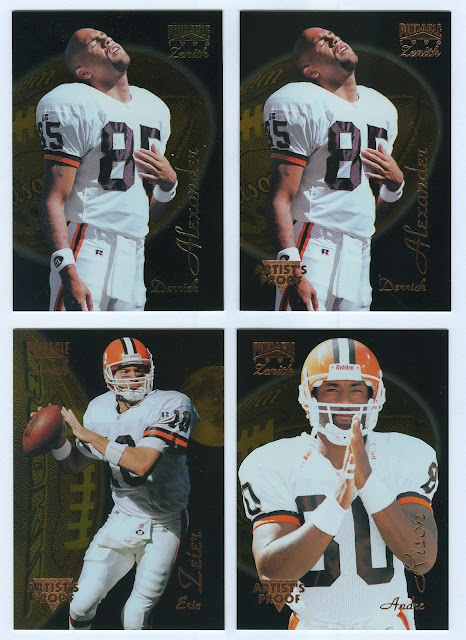 ﻿
I needed the regular Derrick Alexander, and picked up a bunch of Browns Artist's Proofs for the Zenith set.

The next couple of Black Friday posts will deal with numbered cards, and a lot more autographs.
Posted by Angus at 23:10