Not all the stuff I picked up at my mailbox a while back was from my Black Friday purchases. There was also a card that I picked up on e-bay, an important autograph to add to my collection. The card has a little crease mark on the front, but I'm more interested in the back:

Thank you Pro Line for including Hall of Fame players in your set. This card goes nicely with the Paul Warfield Pro Line autograph that I own. 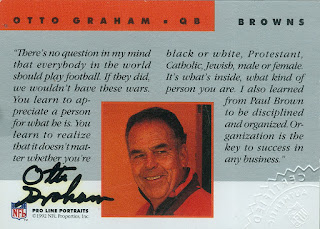 ﻿
From COMC, I also added a second Pro Line autograph from the 1992 set: 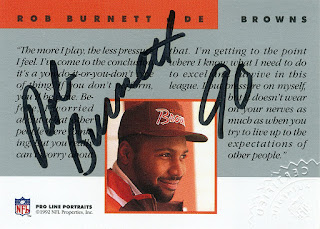 ﻿
Rob Burnett played 14 years in the NFL, the first six in Cleveland, six more in Baltimore after the move, and the final two in Miami. He finished with 73 sacks, of which 40.5 came with the Browns.

These, added to the Tommy Vardell that I already owned, leave me only needing to find the Eric Metcalf and Van Waiters autographs to complete the Browns autographs out of this set. Just a matter of time...

﻿
Until I started collecting again, I don't think I knew of Courtside. The Foilgram card, as with a lot of chrome cards, didn't scan very well, but I just have to show the back. It is awesome!
﻿﻿

﻿
Okay, maybe not so awesome.

Courtside, I didn't know. Wild Card, well, I showed some of it off last post. Here's some 1992 Wild Card:

﻿
This last photo of cards exceeds the amount of touchdowns that Vardell scored in his four years with the Browns (3 rushing, 2 receiving).

I was also able to grab a few other cards I needed from the Wild Card set:

﻿
Okay, not as many stripes as with 1991, but I already owned more from this set.

Here are the last four 1992 cards that I added to my collection with my Black Friday purchases.

﻿
I've always loved the plastic Collector's Edge cards. The idea of the serial numbers on them was a neat concept, but as time goes by I think I prefer the fact that the corners on the plastic stay sharp.

I already had the Michael Dean Perry card from the NFL Experience set, but needed the Kosar and always seemed to forget to look for it, so I was happy to see it as I was looking through COMC.

I already had the regular version of the Bill Johnson Classic card, but didn't have any of the gold parallels so it is also a nice addition as well.

You might think that I think that all cards that I add to my collection are nice additions, and you would mostly be right. However there may be some exceptions to that in my next post. See you then!
Posted by Angus at 17:28