During the Black Friday weekend sales I managed to purchase some cards that probably would have made me faint had I pulled them from a pack. Thank you internet sellers!

Let's start with the semi-stars part of this post.

There were nine different Browns autographs to be found in the 1991 Pro Line set. Shortly after the set came out I managed to trade for a Bill Belichick autograph. Last year, I picked up the Paul Warfield autograph. Black Friday allowed me to double my Browns autographs from the set. 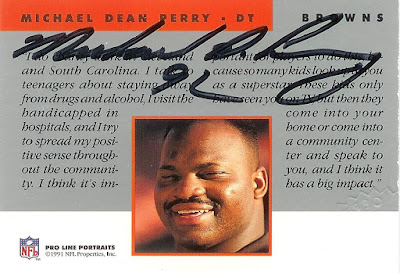 ﻿
I consider Michael Dean Perry to be a star, however his spotlight was considerably dimmer than his well known appliance brother, "The Fridge". I have a couple of Michael Dean's autographs from the 1992 Pro Line set, but was very happy to add this card to my collection.

When younger, while watching games and collecting our cards, a friend and I would always find names that we just liked; names that sounded like they should be football players. In the late 80s the Browns had Mack and Slaughter, and then they added the name Hoard. We may have been thinking horde, but it still made for a great name. 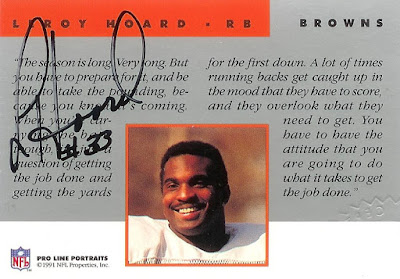 ﻿
Leroy Hoard is another former Michigan Wolverine that was liked by Browns fans; another player to point out to Braylon Edwards when he says that Browns fans would never like or cheer for any Michigan players.

I remember going to card shows and seeing the odd stripe card from Wild Card. I don't think that I ever saw anything higher than a 10 stripe in person. It is something to be able to get my hands on these stripes now. 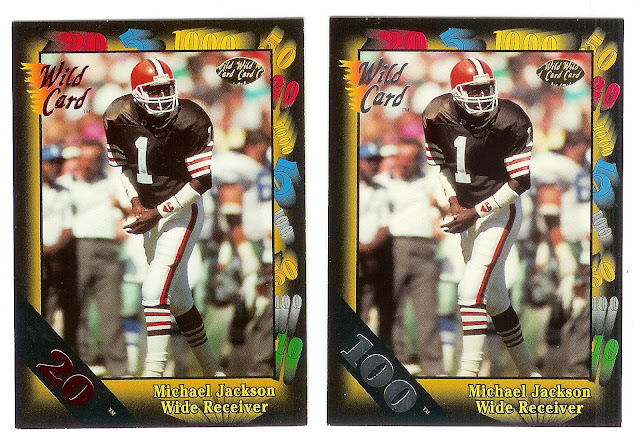 ﻿
Getting the 20 and 100 stripes of Michael Jackson brings me down to needing two of his striped parallels. Eventually I'll complete the collection of a player but I still need the 50 and 1000 for Jackson so it may take a while for him.

Maybe I'll be able to complete one of the following players' sets first. 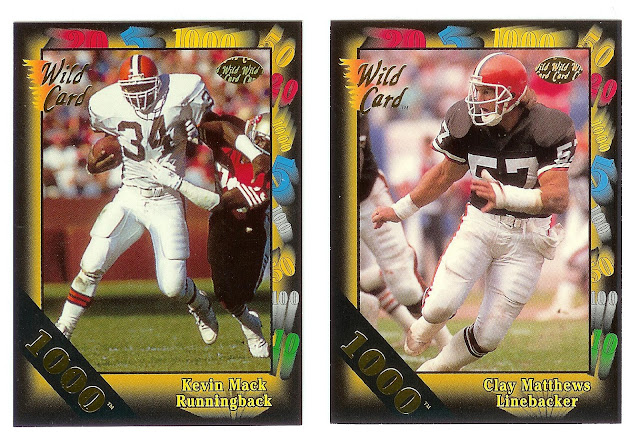 ﻿
I picked up a lot of cards that I really love during Black Friday, but these have to be two of my favorites.

Like with Michael Jackson, I only need two stripes for a set of Kevin Mack stripes, the 20 and 100. That might be more attainable, but I still wouldn't be surprised if I manage to complete a different player first. It all depends on what is out there to find.

When I decided to buy my first Browns jersey it was going to be a Clay Matthews one. Then a couple of days before I went to the store to order it, he signed with the Falcons. I wound up getting an Ozzie Newsome jersey instead. I was happy to see Matthews pick up 6.5 sacks at the age of 40. He might not have the sack numbers that a lot of football fans would consider to be a Hall of Fame player, but he wasn't asked to constantly rush the passer. If he had been, he would have put up the numbers. He deserves to be in the Hall of Fame. I still need his 20, 50 and 100 stripes.

Wild Card also put out a second set in 1991 - a Wild Card Draft set. I had already picked up a few of the stripes from this set but I managed to add these stripes of Cleveland draft picks from that year. 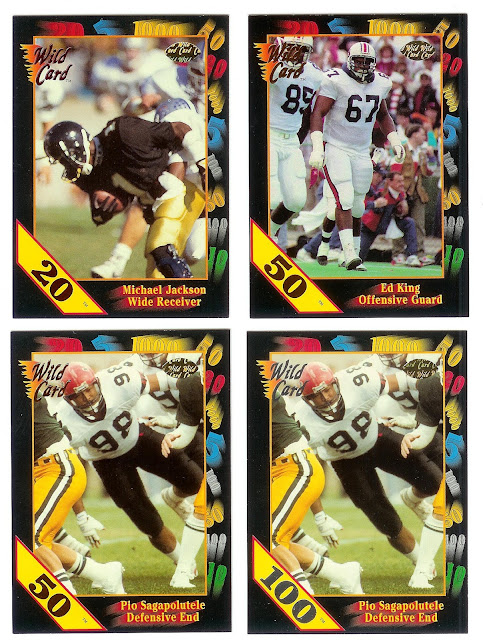 I also picked up one last 1991 Wild Card Draft card during my Black Friday weekend shopping. Here is the redemption card for 1992 Browns draft pick "Touchdown" Tommy Vardell of Stanford: 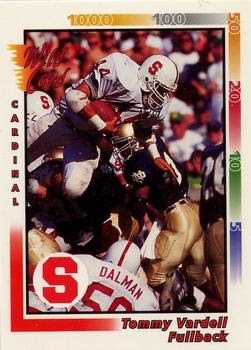 ﻿
And I'll let this card be preview of my next post when I will show the 1992 cards that I picked up, with more "Touchdown" Tommy, more Wild Card stripes, and more Pro Line autographs.