Players with only one card in my collection - 13

Here is another post in a series showing cards of five players with only one card in my collection. I'm using sorting tools at The Trading Card Database to look through my collection on their site to see who only has one card, and then finding the first five names that I haven't posted yet. I'm also using the images from their site. 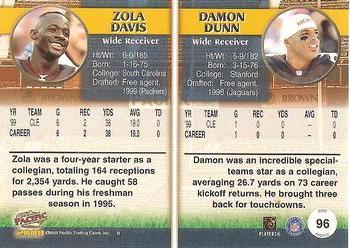 Zola Davis only played the 1999 season with the Browns. He was released by the Browns during the 2000 training camp.

There are three parallels to this card to find, and then Zola Davis also had a XFL card in 2001. 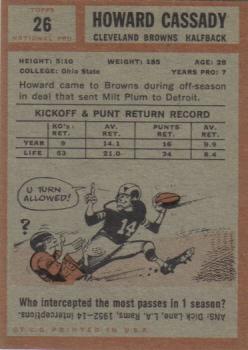 Here is what I wrote in a June 25, 2016 post when I picked up this Howard Cassady card:

This is the only Browns card for Howard "Hopalong" Cassady, who played in 5 games with the Browns after being traded to them from the Lions just before the 1962 season. He had 7 punt returns and 10 kickoff returns for the team in those games. I don't know who is in the action photo - Cassady wore 40 with the Browns, as he did with the Lions. (If that is a Browns player with the ball, and it is number 10, before 1962 the number was only worn once by a Browns player, in 1957 by quarterback John Borten.)


As it turns out, I was wrong when I said it was Cassady's only Browns card.

The 1962 Post Cereal card shows Cassady in his Lions uniform, and the card has his team listed with the Lions, but under the text of the card it says that he was traded to the Browns. That means that I have to find a copy of that card now.

Further looking into the inset photo. If it was from the 1961 season, the year before the card, then if it is a Browns player, the only two players that wore a number starting with a 1 are quarterbacks Milt Plum (16), and Len Dawson (18). I really don't know who is in that photo. 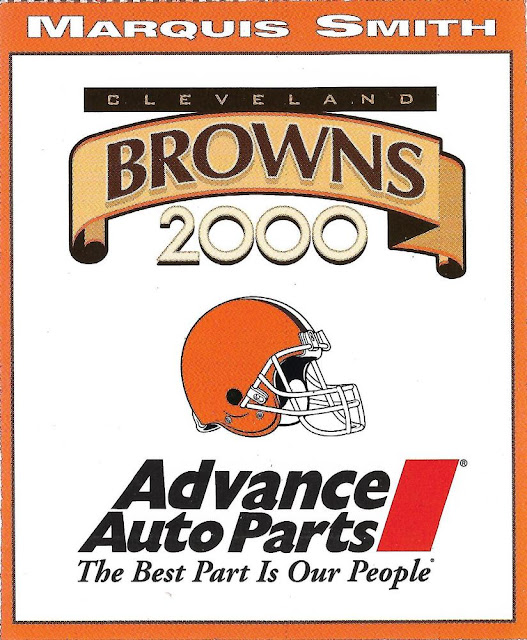 Marquis Smith was drafted by the Browns in the third round of the 1999 NFL Draft out of California.

I am not aware of any other Browns football cards of Marquis Smith, and I think that reinforces why I love oddball sets so much. 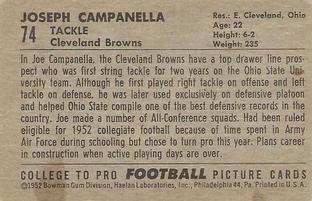 Joe Campanella was drafted by the Browns in the 3rd Round of the 1952 NFL Draft. With a quick search, I wasn't able to find out how he went from the Browns to the Dallas Texans, but according to Pro Football Reference, Campanella played all 12 games of the 1952 season with the Texans, before finishing his playing career with the Baltimore Colts from 1953-57.

The back of his card mentions that he plans a career in construction after his playing career ended. He didn't do that. He went into the restaurant business instead. He partnered with Alan Ameche in opening the Ameche's Drive-In restaurants, and after leaving his partners, he started his own restaurant, Rustler Steak House.

Sadly, in February 1967, Joe Campanella was playing handball and became short of breath and asked to stop playing. He didn't make it off the court, and died in Shula's arms at the age of 36.

In 1952, Bowman had two football sets, of small and large cards. I still need to find the large card. 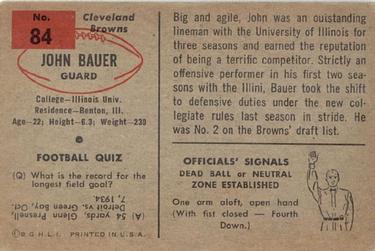 Another nice old Browns card of a player that wound up never playing for the Browns.

John Bauer was drafted by the Browns in the first round of the 1954 NFL Draft. He was then involved in a six player summer trade with the Green Bay Packers that featured quarterback Bob Garrett going to the Packers and quarterback Babe Parilli going to the Browns. The Packers then traded Bauer to the New York Giants in September 1954, and he played his only two NFL games with the Giants that season.

This appears to be his only football card.