I recently bought some Cleveland Browns cards from Trading Card Database member Bounty13, a Dan Marino collector. He shows his collection off at https://www.danmarinocards.com/.

He gave me a pretty good deal on some hard to find Browns cards, and then threw in some extras as well.

I have some very similar stickers to these, but these are different. They are the UK version of the Panini stickers.

A couple of my all-time favorites in Matthews and Newsome are in the above scan.

Okay, the bottom right sticker isn't a UK sticker, it is a regular one of the foil helmet that he threw in and that I included in the scan as it is an upgrade of the one that I already owned. (Mine had a little scuff on it.)

As to how you can tell the difference between the stickers, it is found on the back. 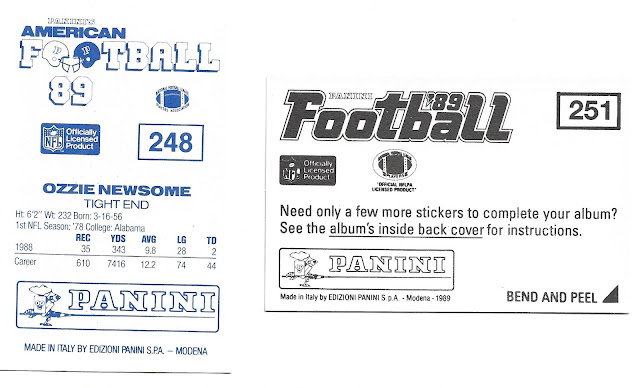 You can see the Panini UK stickers have blue sticker backs, and say "American Football" on them, as opposed to the black sticker backs on the regular Panini stickers.

Also, you can see that the UK stickers have the player's name on the back, and some statistics. The UK version of the foil helmet, which I don't own yet, says "Cleveland Browns Helmet" on the back.

After discovering the awesome 90s Panini Gridiron cards a while back, I was thrilled when I saw that he had 1996 Gridiron cards. Since I love how the backs actually talk about the game where the photos were taken, I'm showing both the fronts and backs. 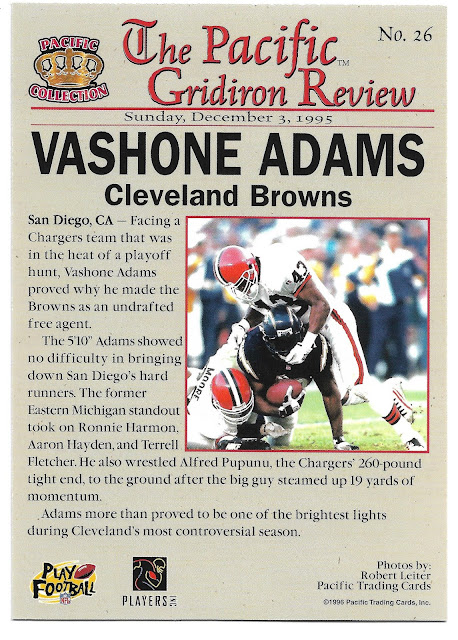 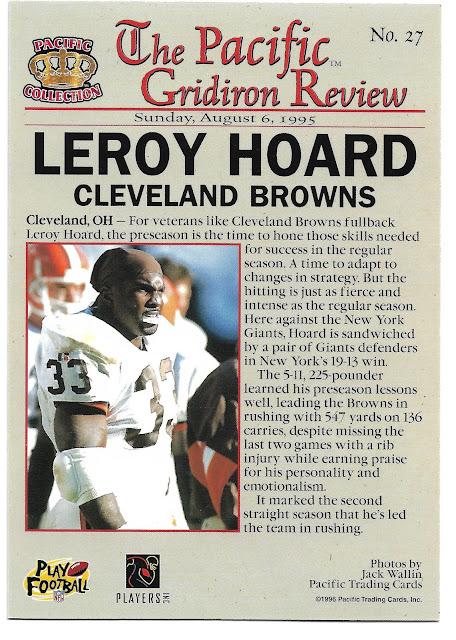 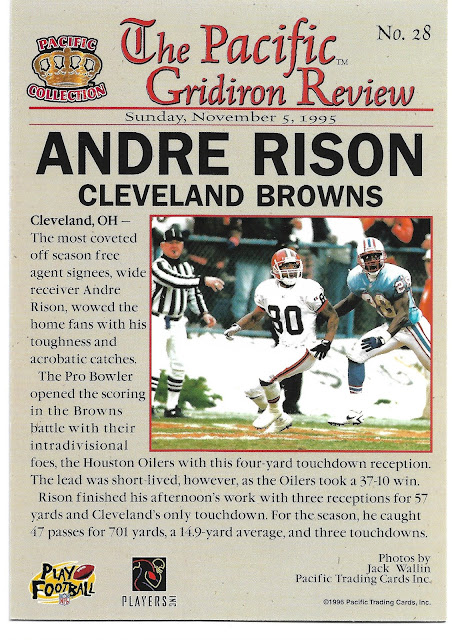 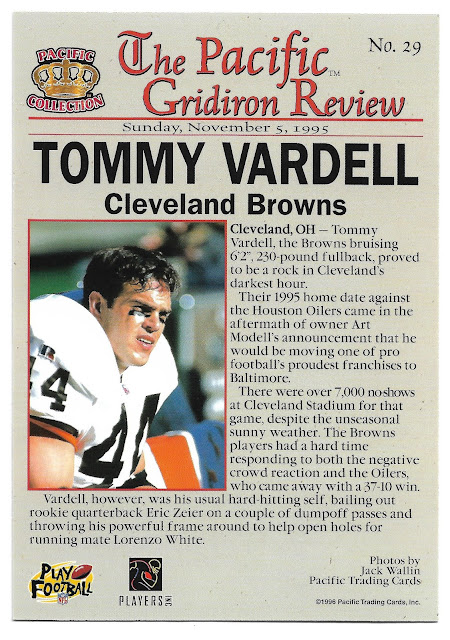 The last two cards were from a dark day that I still don't like to talk or think about. It is funny that the Rison card doesn't mention the events, but the Vardell one does.

There are two cards in this scan, and I already owned a regular version of this Lou Groza Million Dollar Moments card.

I guess the blank front version of the card was what people got back when they got in touch with Fleer for the No Purchase Necessary part of the contest. 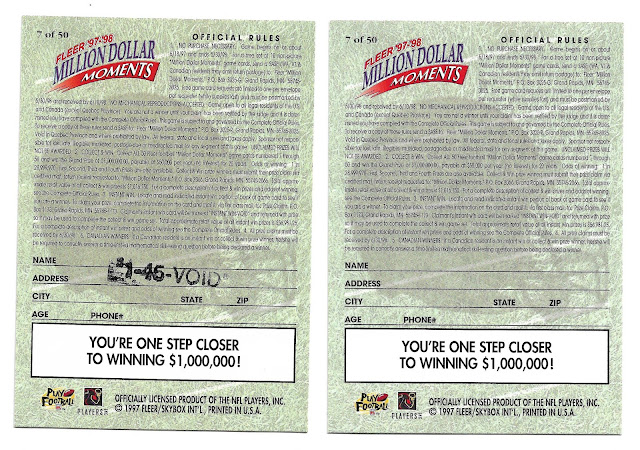 Here are the two backs of these cards that I needed. The one with Groza on the front is a returned version with the void stamp on it, and the other one is the blank front version.

Since Groza isn't mentioned on the blank front card, I didn't ask for it for my collection. It was included with the cards sent to me. Since I have it, I'll put it beside the other ones in the binder, but I really don't consider it to be a Browns card. Nothing on it would identify it as such.

It was nice to add so many new 1990s Browns cards to my collection.

I also picked up some cards from after the expansion team came back.


I love the photo on the Gerard Warren jersey card.

The Kevin Johnson refractor was another throw in to the shipment.


Those are a couple of numbered rookie base cards along with the Braylon Edwards jersey card. Don't you just love how they used to number all the rookies.

Along with the cards from Bounty13, I also bought an inexpensive printing plate off of eBay. 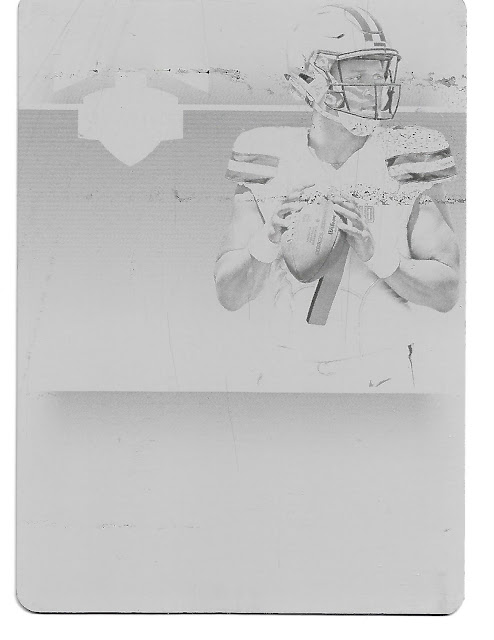 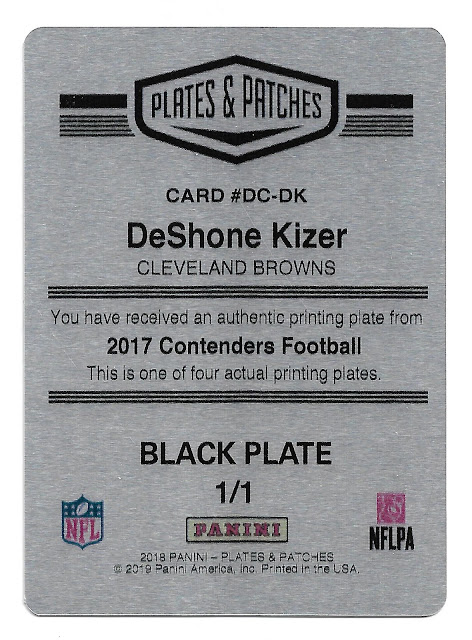 I won it with a fairly low bid, and it soon arrived from Hawaii. I hate that this printing plate has travelled further than I ever have.
Posted by Angus at 05:14