As with many other collectors, I took advantage of COMC's recent sale and picked up roughly 100 cards for my collection. Most were post-expansion, with a lot of parallels included in the bunch, but I did manage to pick up a few pre-expansion Browns cards as well.

I added three 1962 Topps cards that I needed. 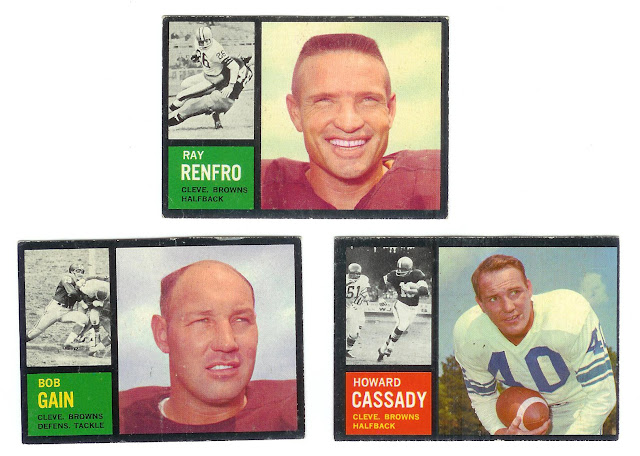 I love the little action photos on the side of each of the cards.

I was finally able to add Ray Renfro's 1962 Topps base card to the Topps Buck of the same year. Gotta love that grin and hair!

Bob Gain played his entire 12 year career with the Browns, making the Pro Bowl five times. This is the sixth Bob Gain card in my collection, which covers all of the Topps, Fleer and Post Cereal cards during his playing career.

This is the only Browns card for Howard "Hopalong" Cassady, who played in 5 games with the Browns after being traded to them from the Lions just before the 1962 season. He had 7 punt returns and 10 kickoff returns for the team in those games. I don't know who is in the action photo - Cassady wore 40 with the Browns, as he did with the Lions. (If that is a Browns player with the ball, and it is number 10, before 1962 the number was only worn once by a Browns player, in 1957 by quarterback John Borten.)

The next card that I ordered from COMC was actually a double. I don't know why I thought I needed it, but as it turns out the one that I received is in better condition than the one I already owned so I'm not going to complain or worry about it.
Now, of course, having a duplicate is really tempting me to actually stand one up. I won't, to keep it in good shape for someone else that might need it, but it is tempting.

Next, I added another 1977 Topps Mexican card to my collection. With this card, I now have half of the 24 Cafes cards. 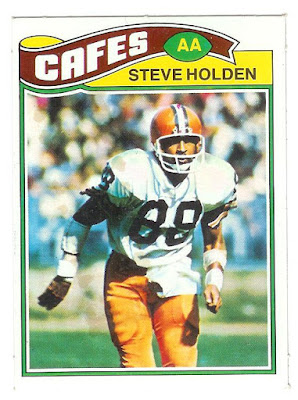 This card completes my Steve Holden collection - all four cards of it. I don't know Spanish, so other than seeing "AA" and knowing that it should be "WR", I'm not sure what it stands for.

I actually had bought the last two cards well before the sale and they were sitting in my account waiting to be shipped. 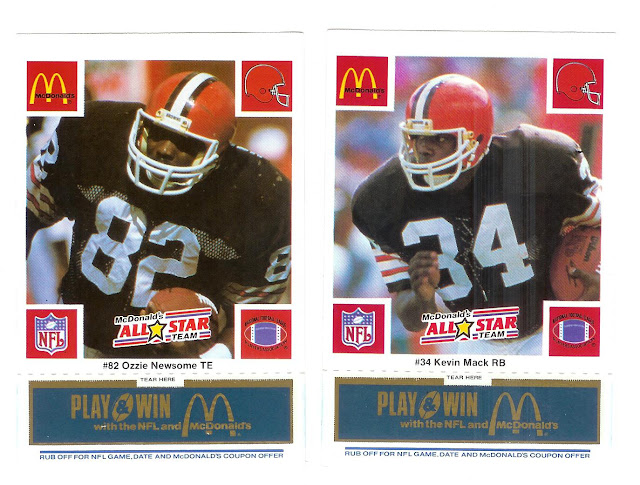 These are the last two All-Star Browns scratch color variations that I needed. And I'm so close to completing the regular Browns sets as well - I've completed the blue, gold and black variations and only need five more green cards for the set.

The next few posts will show other additions from my COMC order.