I stopped by a local card store to see if they sold Ultra-Pro 2 pocket pages by individual pages. They did, and I picked up what I needed, but as I looked around the store, I noticed that they had a small box of cheap loose packs by the entrance. I looked through them and decided to buy these three packs. 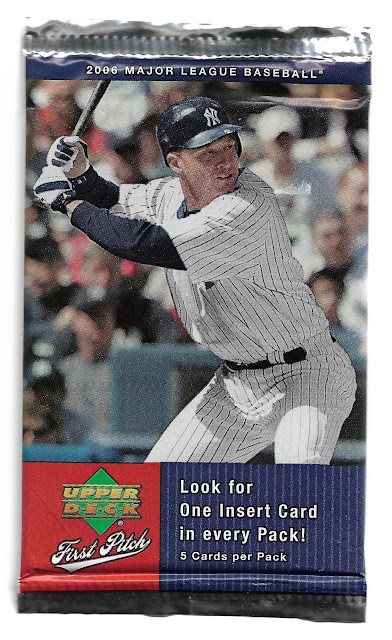 This pack of 2006 Upper Deck First Pitch was fifty cents. As you can see, it contains five cards, one of which should be an insert.

The pack started with two Cubs, with Burnitz being a former Met.

I like the layout of the cards. I like seeing the division on the card with the team logo. It seems different to me.

Here is my one insert. I kind of like it. It reminds me of playing in the home run derby on one of my friends' video games.

An enjoyable open for fifty cents.

The next pack cost me a dollar, and it was the only one there. I would have bought more if they had them. 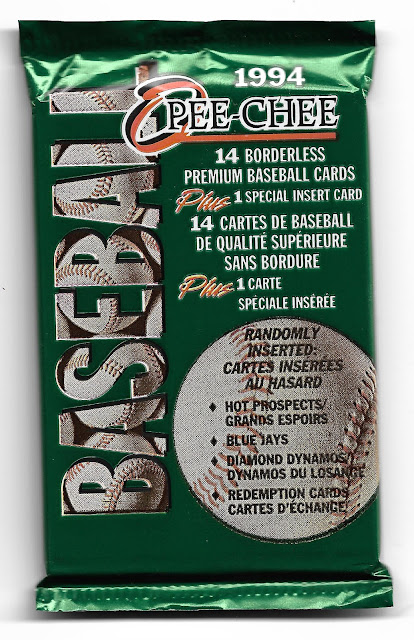 So we should have 14 cards plus a special insert. I didn't see any odds on the other inserts listed on the front.


I think this is the second year that the O-Pee-Chee cards had different designs with the Topps cards. Branded with an O-Pee-Chee logo, you can see with the position on the front in both English and French.


This counts as my insert card. It is a nice Ken Griffey card, but should your insert really be a mail away offer card? 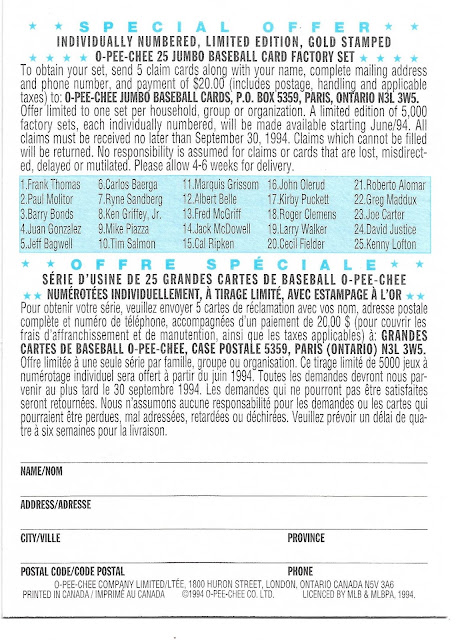 I don't remember ever actually following up on one of these mail away offers.


I forgot that Howard Johnson moved on to finish his career with the Rockies.

Okay, I'm not a Braves fan, but this is an awesome catcher's card of Javy Lopez. I think it is a pretty good use of a horizontal card. I wish it was pulled back a little bit to see if the plate is right there, and to get his full glove in the shot, but it is pretty good as is.

I still don't know why some card sets still went with Denny for El Presidente, as opposed to Dennis. I wonder if he was even asked what he preferred.

I also like the swing on the horizontal card. That is a photo that could be used on one of the unlicensed cards.

Here is a look at the back of the cards: 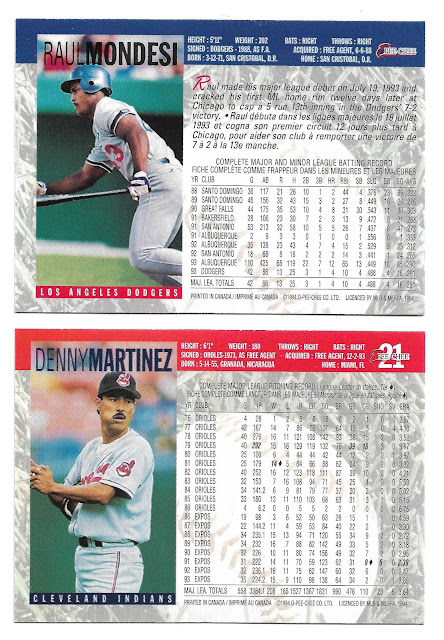 If you look at the Raul Mondesi card, you'll notice that it is missing the card number on the back. It looks like it is an uncorrected error.

A veteran like Martinez had no room for a write-up, but it is nice to see stats for his whole career.

I also like that the backs have different photos on them than the front.

I may have bought the odd pack of these cards back when they came out, but I was more into mostly collecting NFL cards in 1994. I don't remember what these packs originally retailed for. If I saw more for a dollar, I would probably pick them up.

Finally, in the discount pack bin, I found one single pack of football. 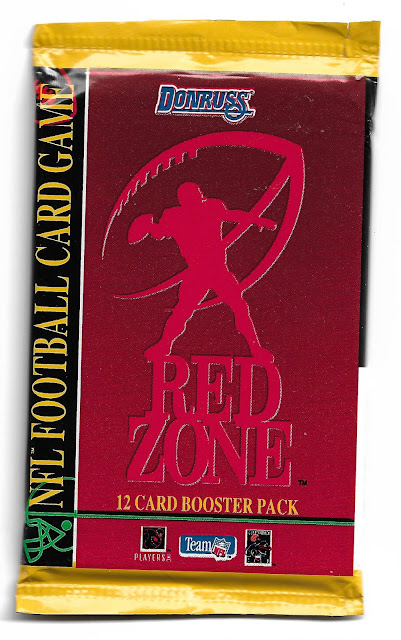 I already have my Browns team set for this set, but I still figured that I would buy this 1995 pack for fifty cents. 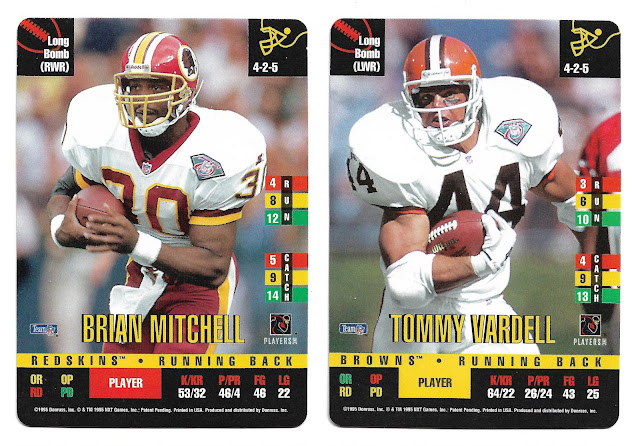 There are no card numbers on these cards, so there is no real identifier to use as a caption for the scans.

It is nice to get a Browns card as the second card in the pack, and it is one of Gavin's Guys from Granite. I don't believe that this Vardell card was among those that I sent him recently so I will put this one aside for him. 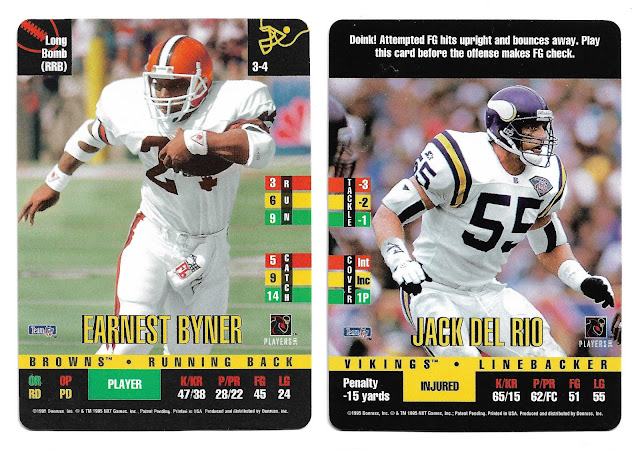 And the next card in the pack is a Browns card too! Awesome! The funny thing with the Byner card is that Byner wore the number 44 in his first stint with the Browns from 1984-88. When he came back to the team in 1994, Vardell was wearing his old number. 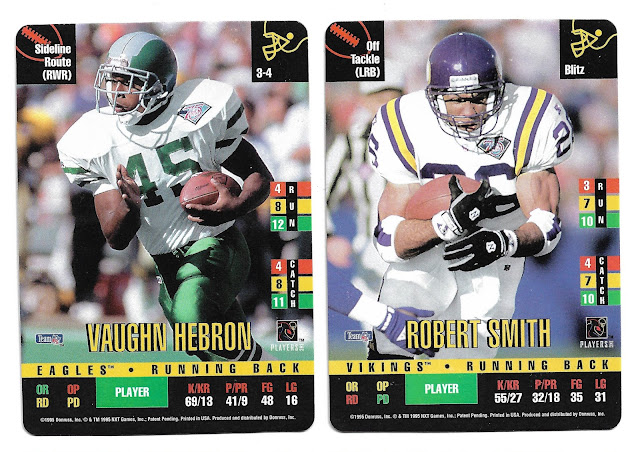 I notice that some helmets in this set don't have their logos on them. I'm sure there is some licensing aspect to it, but I don't know any details behind it.

Robert Smith had a really good, short career. He retired after the 2000 season, his eighth season in the league, after rushing for over 1500 yards that year. 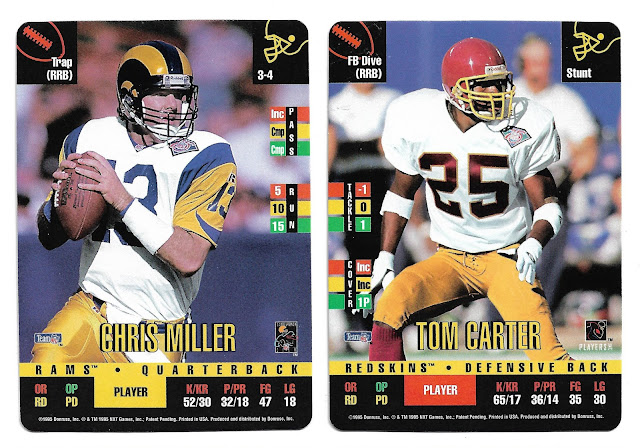 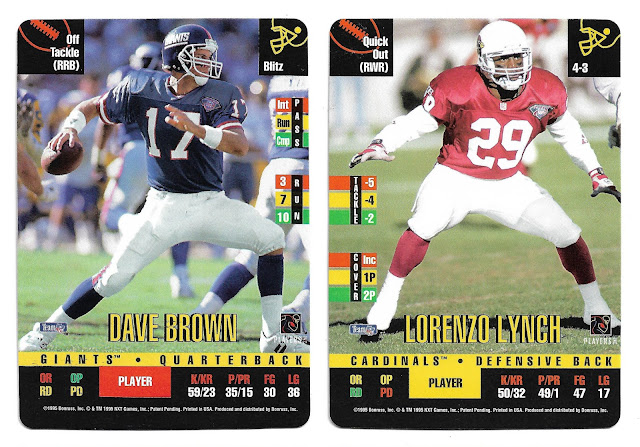 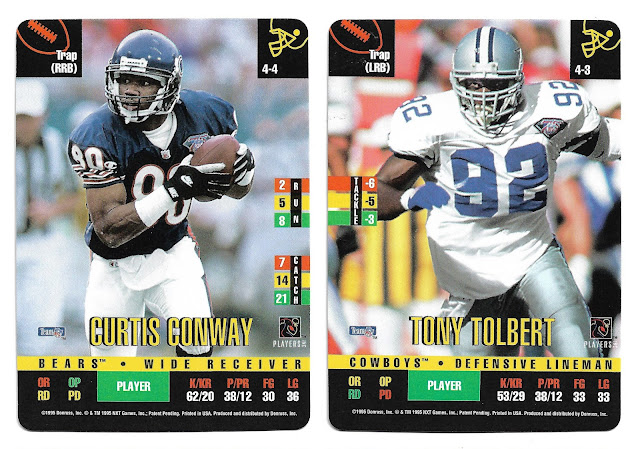 The twelve card pack had three teams represented with two cards each. That is a little surprising. I'm sure that some people would complain about getting two Browns in a pack, but that sure makes it worth the fifty cents I spent on the pack.

I think opening these packs, and getting a post out of them, was definitely worth the two dollars (Canadian) that I spent.
Posted by Angus at 00:26