Meet the Mets that Night Owl gave me

Sunday was another one of those fun days where I met up with Night Owl and traveled with him to Syracuse for another card show.


We'll start with some of this year's cards that he had for me.

The Lagares card has been slotted into the new 2019 page of my Opening Day Starting Lineup Project.

The Todd Frazier card seems to be an homage to the 1970 Topps Bud Harrelson card where he is signing autographs for fans.

It was sad to read that Tom Seaver would no longer be making public appearances due to dementia, but it was nice to hear that he is being honored by the Mets with a statue, and that the address to Citi Field will be changed to 41 Seaver Way.


These were fun cards to get. The Fleer Maddox card seemed very familiar to me when I was looking through the cards when I was given them. I discovered why when I looked through my starting lineup binder. Not having one of his 1980 cards, I was using that card to represent Maddox starting the 1980 season opener at third base for the Mets.

The Kingsport Mets are the Mets rookie affiliate in Kingsport, Tennessee that play in the Appalachian League. The franchise has been affiliated with the Mets since 1980.

A funny thing about that. On the way to the card show, Night Owl and I were talking about minor league affiliates and their names. The conversation came up because I was discussing the Mets new AAA affiliate in Syracuse, the Syracuse Mets.

You know what? That doesn't look right. I like the history of the name of the Syracuse Chiefs and didn't think the name needed to be changed. As a kid, I liked all the minor league affiliates to be named after their parent team (it helped me figure out who played for who), but now I can understand how the team would want to have a name brand that they could keep even if their ownership or affiliate changed.

It isn't as though all the Mets farm teams are the Mets. The AA Binghamton team recently changed their name from Mets to Rumble Ponies. This made for confusing moments at the first home game when I didn't know what to chant. There was no more 'Let's Go Mets!'

Okay, I guess that can help justify going to Syracuse Mets. I will know what to chant.

The Swoboda card went into my opening day binder to an empty slot that I had for Swoboda in 1966. It could end up moving from there if I ever get a 1966 Swoboda card, but for now it is there.

The bottom card is from a set that I should try and pick up. I own a few cards from the 70 card set.

Looking at the date on the card, the Mets swept the Pirates in a doubleheader. The back of this card mentions that Jerry Koosman picked up his 16th win in the first game with his 15th complete game of the season. It also mentions that, in the two games, Art Shamsky (#24 pictured on the card) went 4-7 with 2 RBIs and 4 runs scored.

Along with these cards, Night Owl also gave me something from the beautiful collection of pictures that he received from Alan.

Mixed in with the Dodgers photos were two great Mets photos! 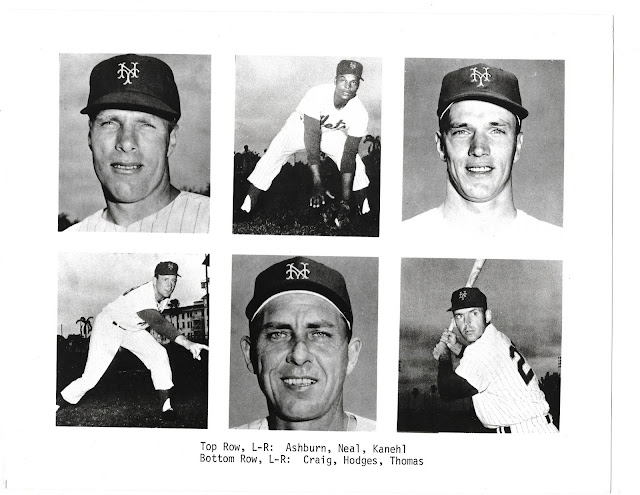 Looking at the players to try and date the photos quickly gave me a probable answer, that they were from the Mets inaugural 1962 season.

Richie Ashburn only played one season with the Mets, in 1962, the last season of his fifteen season Hall of Fame career.

Rod Kanehl played his whole career with the Mets, from 1962-64. He hit the Mets first grand slam against the Cardinals on July 6, 1962.

Despite knee problems, Gil Hodges played 54 games with the Mets in 1962, and 11 games in 1963 before being traded to Washington where he retired to become their manager. He then came back to manage the Mets from 1968-71, which includes the World Series win in 1969.

Frank Thomas played with the Mets from 1962 until a trade to the Phillies in 1964. He hit 34 HRs in the expansion season, and that record stood until 1975 when it was broken by Dave Kingman. 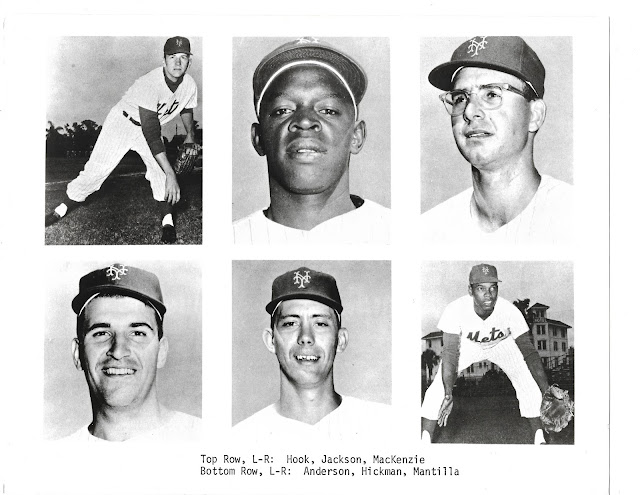 I never knew what Jay Hook looked like, but I knew who he was as the answer to a trivia question. He was the first Mets pitcher to win a game. He retired from the Mets in the 1964 season.

Al Jackson had two stints with the Mets, from 1962 until a trade to the Cardinals after the 1965 season. He was traded back to the Mets after the 1967 season, and played with them until midway through the 1969 season when he was traded to the Reds.

Ken MacKenzie was the only Mets pitcher with a winning record in 1962 with a 5-4 record. He pitched part of the 1963 season with the Mets until being traded to the Cardinals on August 5.

Craig Anderson pitched for the Mets from 1962 until the end of his career in 1964. He was the losing pitcher in the last game played at the Polo Grounds.

Felix Mantilla only played the 1962 season with the Mets. He was traded to the Red Sox in December 1962.