The things I'll do for charity...

A couple of weeks ago, I asked a bartender friend what she was doing for St. Patrick's Day. I know that she has like being included when a group of us have gone out before, and she has joined us in the past with her husband in tow. She answered that she was working for a special fundraiser being held in the restaurant.

My friends and I play Buzztime trivia regularly in this restaurant. Another group of regulars are the coaches and organizers for the Nepean Eagles minor football club. I talk football with a couple of them, and have attended a couple of fundraisers of theirs in the past, but this fundraiser was for one of their nine year old players.

When we noticed that the fundraiser had a trivia component to it, some of us trivia regulars decided to attend, and spend our St. Patrick's Day at that bar. Now, I missed the live music and singing that I would normally add my accompaniment to in other bars, but the cause was worthy. (Our team handily won the trivia, and went to donate the restaurant gift card prizes back to the fundraiser, but the restaurant instead paid the cash equivalent of the gift cards to the fundraiser, and then still gave us the gift cards. This on top of a percentage of food and beverage sales that they said they were going to give. Thank you Broadway Bar & Grill!)

As well as the trivia, there were raffles, and lots of silent auction items to help raise money. I figured that I would contribute a number of bids to help push prices up and appreciate that it was for a good cause when I wound up winning something that I didn't really need.

I didn't expect to find anything Cleveland Browns related at the auction.

After eyeing some potential items to bid on, I saw some signed footballs down the table. Being home to the Ottawa RedBlacks, I figured that they would be signed by some of their players. Well, two that I remember seeing were, but something jumped out at me on the third football: a Browns helmet! There was a Myles Garrett signed Cleveland Browns football on the table!

I was excited! I quickly looked at the bid sheet - nobody had bid on it yet!

The minimum opening bid was $80, and they wanted $10 increments on it. I slapped down a $90 bid. (I could have gone with the minimum but I wanted to look serious.  ...Or I just made a charitable mistake.)

For the rest of the evening I checked out the silent auction tables and kept seeing that I had the only bid on the football. When they called the two-minute warning on the bidding I got up and stood within sight of the football. People added bids to the items beside it but left it alone. And then it ended, and I won! 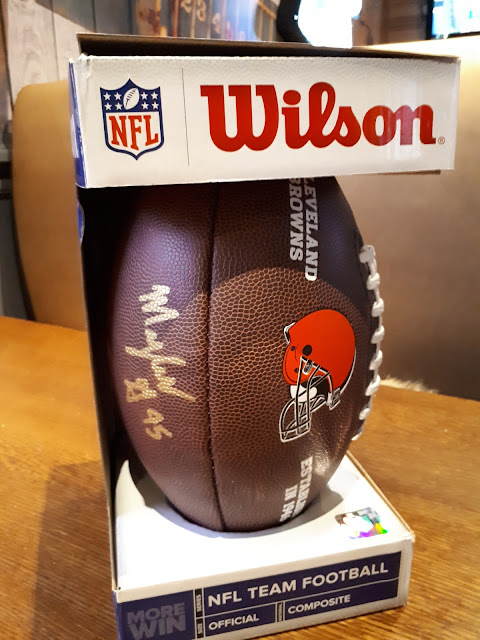 The different brown colors on the ball are just shadows from the picture and the lighting in the restaurant. 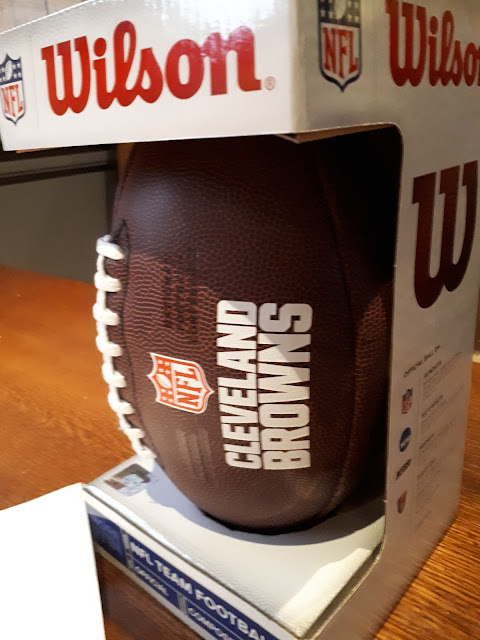 Here is the letter that was with the ball to educate people as to whose autograph they were getting. 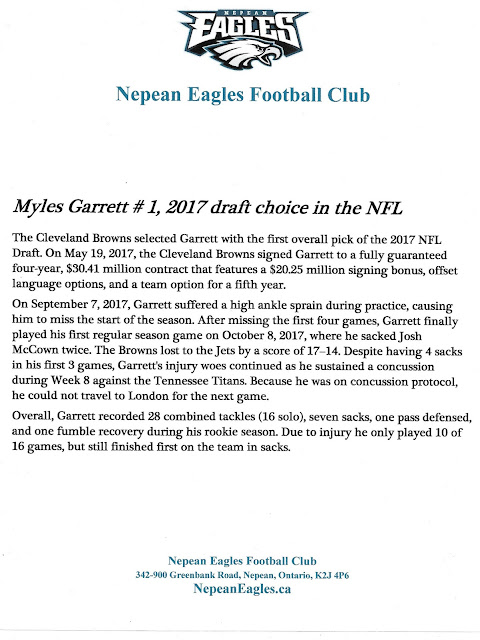 Of course, I didn't need to be told this but I'm happy they gave me the letter to go with it.

I was curious, though. How did a signed Myles Garrett football wind up at a fundraiser in Canada's capital city? I asked one of the organizers, and he said that its donation was arranged by former CFL All-Star, and local media personality, Ken Evraire.

Mr. Evraire was there, so I went to ask him how a Browns football wound up in Ottawa. I believe that he told me that it was arranged after a conversation with former NFL quarterback Jesse Palmer, who grew up in Ottawa.

We talked football for a bit, and he mentioned that there was a letter of authenticity in the top of the box. I thanked him for letting me know, then waited to pay for the football.

After getting back to my table, I decided to look at the letter, and was very pleasantly surprised!

I don't know why I didn't expect it, but it was actually a letter from the Browns on team stationary. 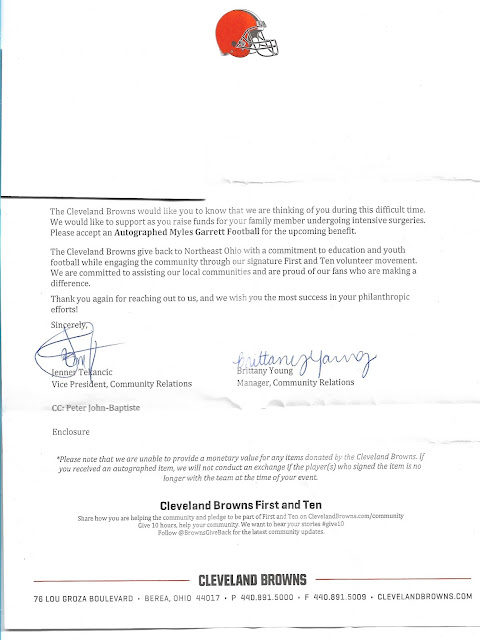 Yes, there are fold marks, and I blocked out the address where it was mailed, but I'm thrilled with owning this letter as well.

Thank you Cleveland Browns First and Ten program! The ball actually went to a Browns fan and will be won't just be stashed away in some closet by someone that bought it just to support a good cause.

The restaurant was packed. I was told that the organizers were happy with what they raised. All in all, it was a good night for a good cause.