I decided to take advantage of this year's National Hockey Card Day last Saturday and visited two local card stores and a local Toys "R" Us as well. Of course, this resulted in my first hockey card purchases of the season. 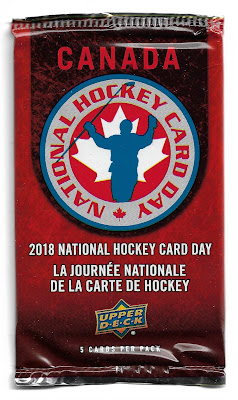 I went out fairly early on Saturday morning, sometime within the first hour that stores opened. The closest card store to me was giving everyone who entered three packs of the free cards. The owner there knows that I am mainly a football collector but that I will buy packs from other sports just to see what they look like, and to see what I might get. I told him that I would buy some hockey to look at, but I was still going to look through the rest of the store.

I spotted a solitary box of Topps Heritage baseball sitting on his shelf at a decent price and spent the next little, while talking to him, internally debating whether I should buy it or not. I did, and will have a post on that later, but I also bought a few packs of hockey cards.

At the second card store that I went to, nothing was said about National Hockey Card Day as I entered. I didn't see anything open that really caught my eye but they did have a lot of supplies that I needed. As I went to pay for them, I was presented with a single pack of cards and was told that it was National Hockey Card Day. I thanked him for the cards.

With four packs of five cards, and a fifteen card checklist, I thought that I could get lucky and get a full set.

Here is the checklist, included in each pack. Since I had more than one, I scanned it so that the front and back are side by side. 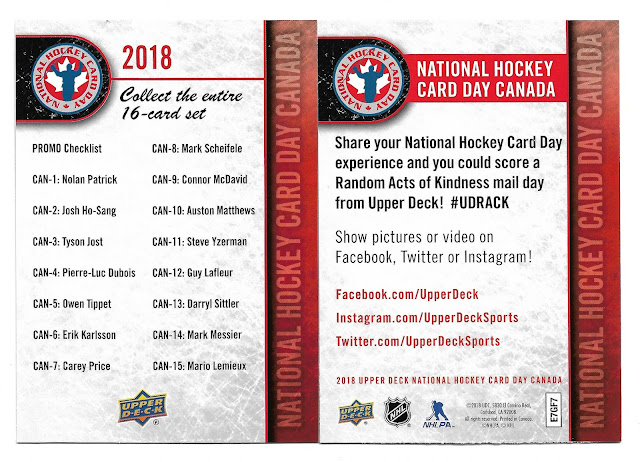 I know that I really don't follow hockey much anymore. (I guess I'm a poor excuse for a Canadian.) However, the NHL really ticked me off by seemingly dismissing outright the concept of their players playing at the Olympics. I really don't think there was serious negotiation over the matter. That being said, looking at the checklist, I can't tell you what teams Jost, Dubois and Tippet play for. That's bad.

As I opened the four packs, I immediately noticed a lot of doubles. I received nine different cards, and of the nine, only one was a single. Three came in triples.

Again, with those that I have two of, I will scan them side by side. Here is what I got for the base set. 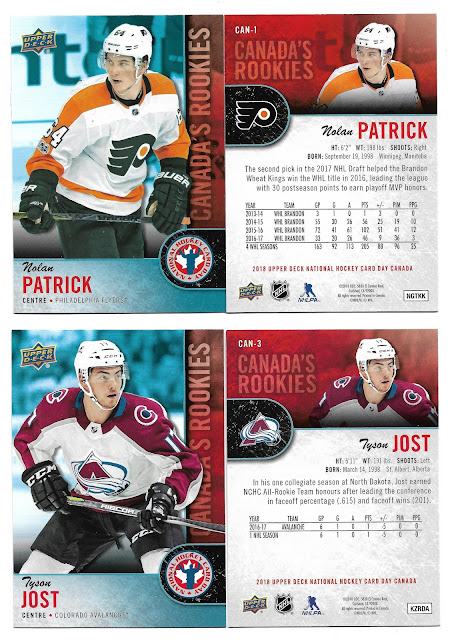 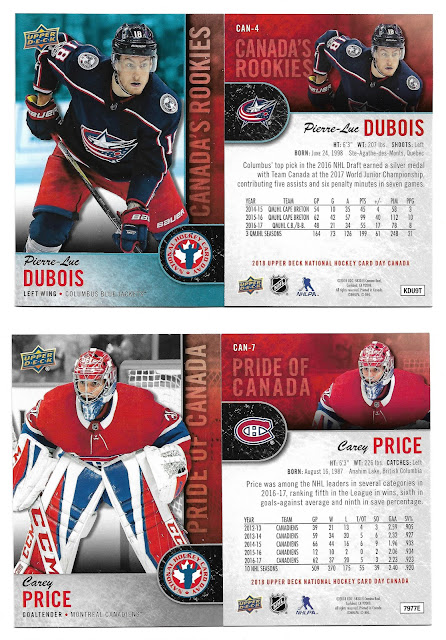 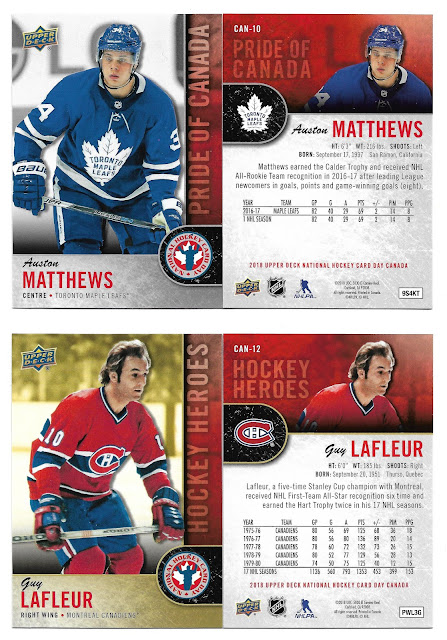 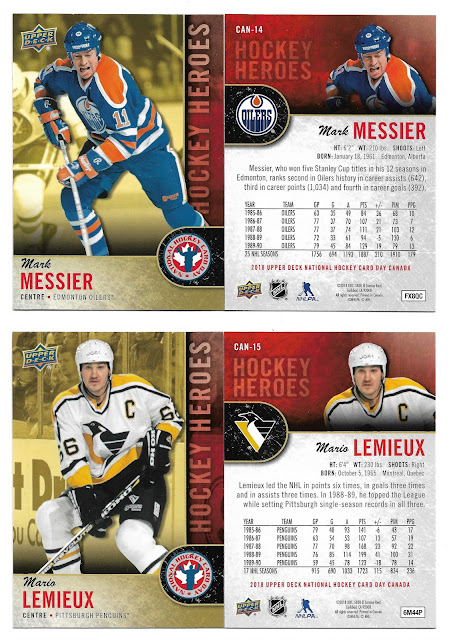 Well, I found out what teams Jost and Dubois play for.

At the first store, for making a purchase, I also received an extra promotional card. Here it is with the card that I only found one of in my packs. 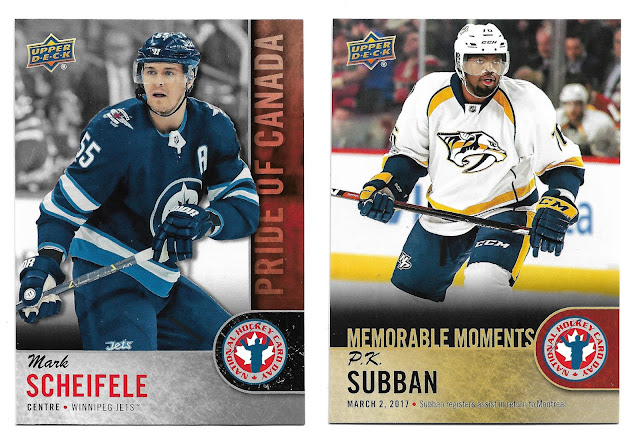 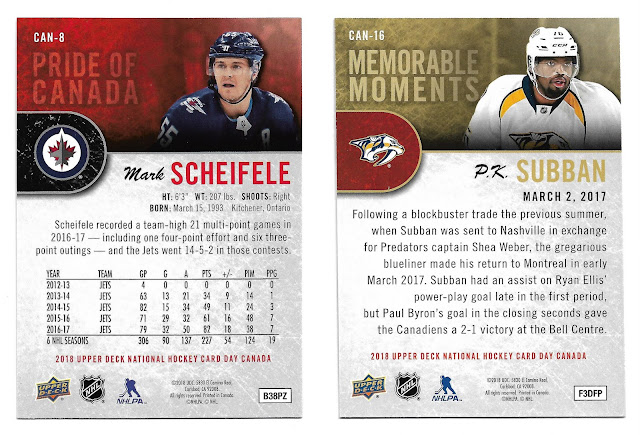 As well, I had heard that Toys "R" Us was giving out sheets of cards as part of the promotion. I popped into one of the local locations and picked up this sheet along with the purchase of a blaster of Upper Deck Series 1. 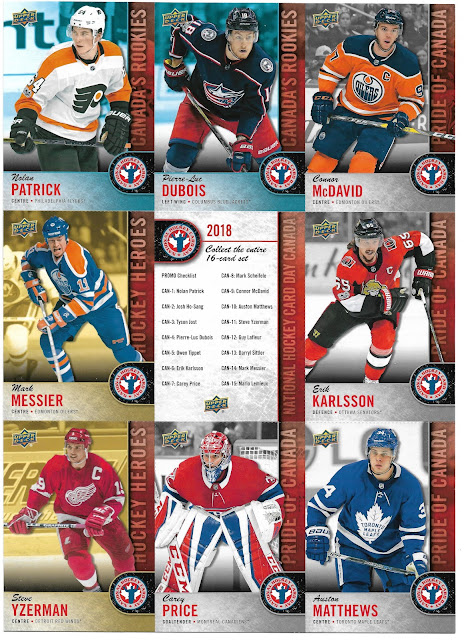 There were multiple sheets to choose from. I grabbed this one so that I could send it to someone that I know collects Steve Yzerman.

I was happy with the promotion, although with the box of Heritage baseball, I spent more than I expected to for the day.

Here are the packs that I bought at the first local card store. 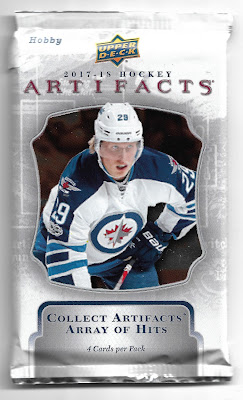 It is only a four pack of cards, but I hadn't seen it yet. 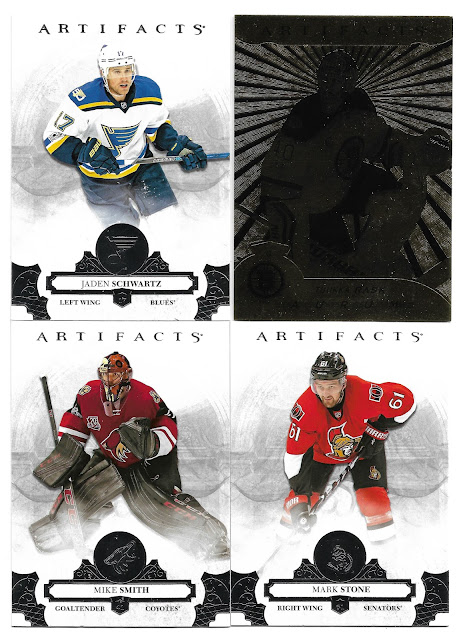 So, you can see the three base cards. I'm happy to say that I know all of these players.

As for the fourth card that didn't show up well in the scan, well, here is a picture of it. 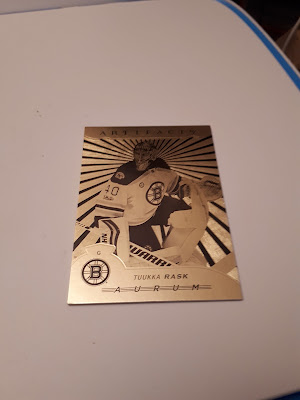 My first reaction was that the Aurum inserts seemed pretty cool. The store owner told me that they have a scratch-off code on the back to try to get people to collect them all and redeem all the codes, and that, of course, there would be short-prints to make that difficult.

The other two packs were bought on the recommendation of the customer next to me. He told me to buy Upper Deck Series 2. 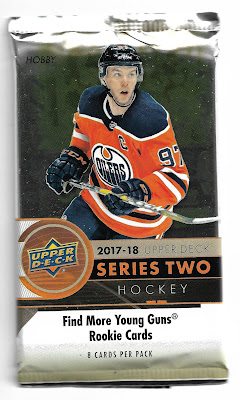 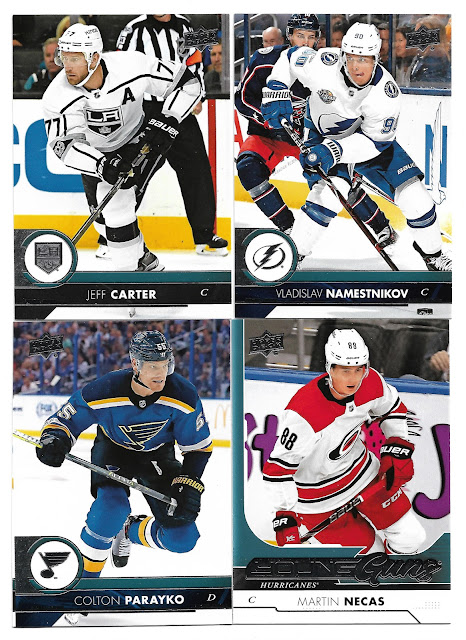 Okay, I don't know Parayko and Necas, but was happy to see that Necas is a Young Guns card. 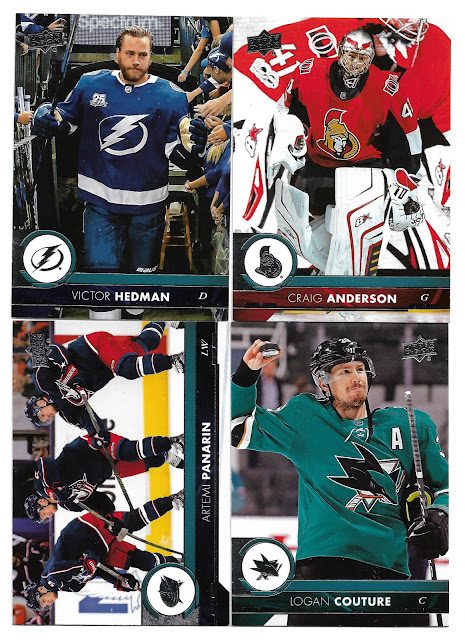 I know all four of these guys! Now, of course, being in Ottawa I better know Anderson. I saw Logan Couture play in junior hockey for the Ottawa 67s. 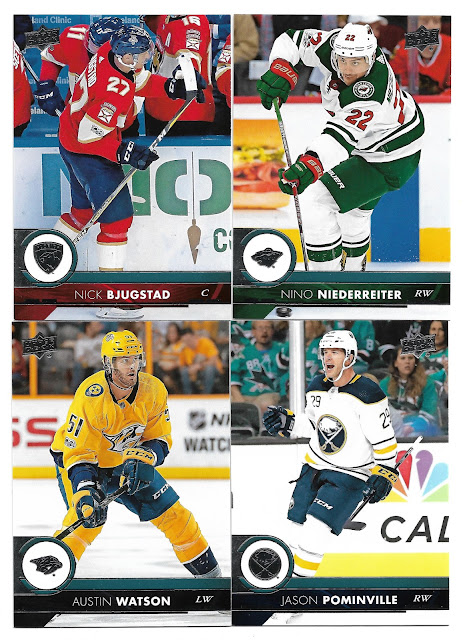 I don't know much about Niederreiter, but I know the name because every time I hear it I think of Martin Short's character in Three Amigos, Ned Nederlander. 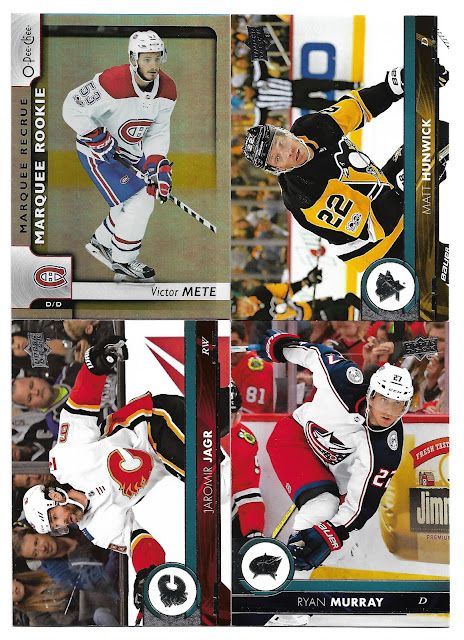 With friends of mine here being Habs fans, I should probably know Victor Mete, but I don't, and I can't say that I know Matt Hunwick either.

I'm not sure what the O-Pee-Chee insert is. I thought O-Pee-Chee still had their own sets. I guess Upper Deck is just capitalizing on the name among hockey collectors.

The blaster of Series 1 that I bought was a special Canadian Edition that came with two special insert cards. 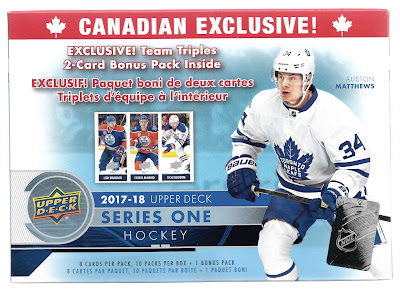 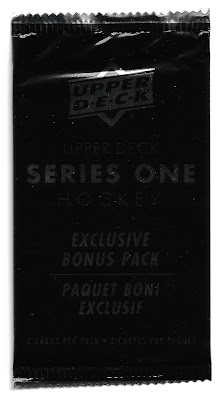 Here are the exclusive bonus cards that I found in my pack. 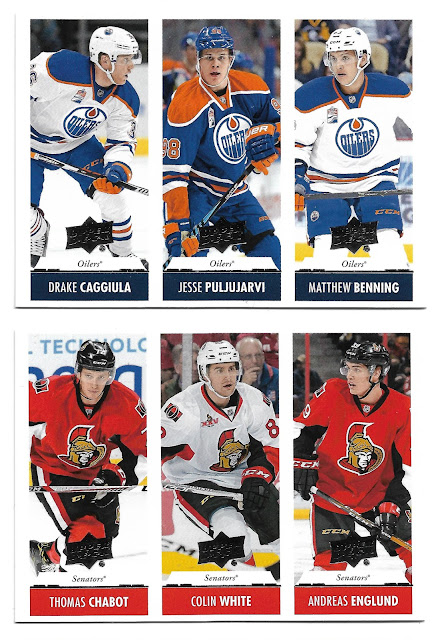 I'm happy to say that I know of all three players on both cards. I'll blame an Oiler-fan friend of mine for me knowing the top card. The Senators I know from local sports media.

I'm not going to show all the cards from the blaster, just the inserts and Young Guns.

To once again embarrass myself, who? (Wow, I really am not watching hockey these days...) 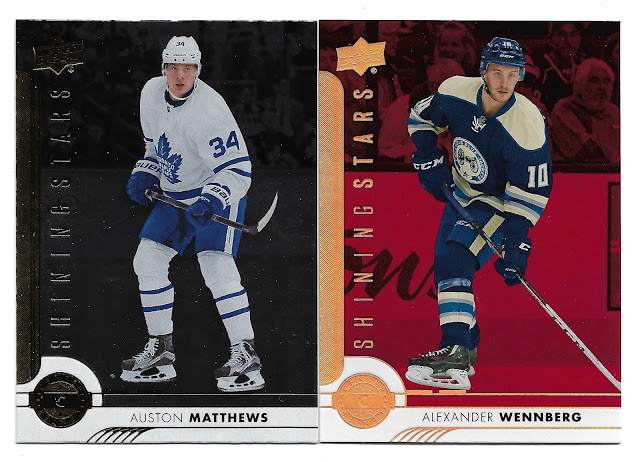 I'm guessing that the red one is a parallel. I don't recognize that Columbus uniform. The black and white portrait is kind of nice, but I still think that I would prefer this portrait set to be in color. 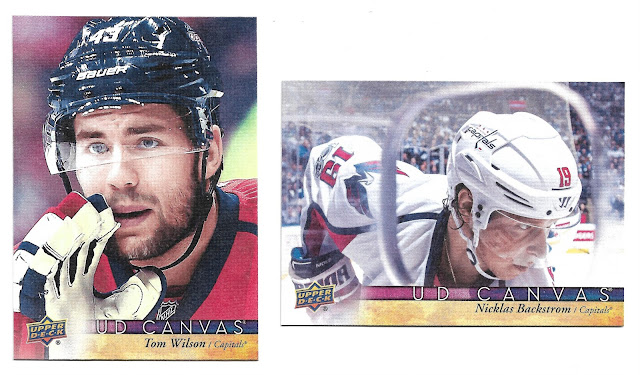 Okay, I like the canvas cards, but I only know one of these Capitals. I was surprised, though, to see on the back of the card that Backstrom has played 10 seasons in the NHL. I think I would have thought it was only six or seven. Maybe I have been out of touch with hockey for longer than I thought.

Anyway, it was nice to buy these to see what was happening. I'm not really that attached to most of these so if anyone wants me to put something aside for them, just let me know. And if you're looking for any of the base Series 1 cards, let me know and I'll look to see if it was in my blaster.