I find that I'm like a lot of bloggers in the fact that I like sending out packages to others. When I know what people are collecting (team bloggers make that easier) I tend to keep a little bit of an eye out when I'm looking through piles of stuff at shows, and then every now and then I try to mail out a bunch of shipments. I really don't care if I get anything back or not, but I do love it when others keep me in mind when they see interesting Browns cards.

After sending such a package to ARPSmith, he sent me a note saying he would put together a package of Browns for me. Woo hoo! But, before he did so, and after I had made a post about the various 2008 Score parallels, I decided to look through Sportlots to see if I could find any missing parallels, and what did I find? A seller named arpsmith that had a couple of cards that I wanted/needed. After a quick email to him to ensure it was the same person, I spent some time going through his football listings to find Browns cards that I needed. There was a lot, but he said that he would send them along as a trade instead of having me buy some of them. Thanks!

So, what did I find?

(I had scanned all these cards onto a memory stick when I was home in Ottawa before Christmas, hoping to post them then. Now, still in Arizona, I'm looking at all the files, and not remembering what order I planned on putting things in. Ah, who needs organization? I'll make something of this post.) 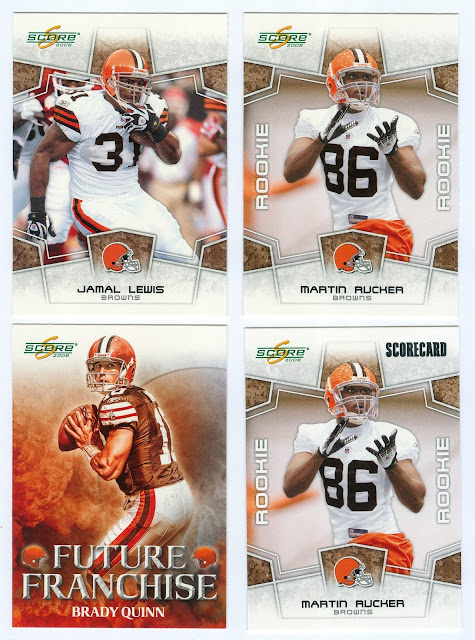 Well, after the long intro, was anyone surprised to see some 2008 Score parallels? All except the Scorecard parallel of Martin Rucker are Glossy parallels. The Scorecard is numbered out of 649. 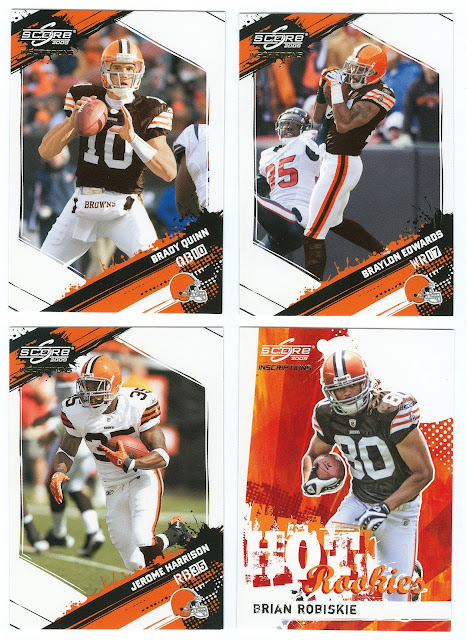 Continuing with Score, these cards are all from the 2009 Score Inscriptions set. You have to love when they put out a whole different parallel set! The Hot Rookies parallel is numbered out of 499.

Some collectors out there collect the players in their college uniforms. Here are some.

I was wearing my Ozzie Newsome jersey last weekend in a bar in Phoenix, watching the Browns win their first game of the season. He's still one of my favorite players, but I can't say I cheer for his success as the GM of the Ravens.

Former Heisman winner Charles White let drugs and partying ruin the start of his NFL career in Cleveland. He had success with the Rams, and his old college coach, after joining them following his release from the Browns. I think that I've mentioned in my blog before that I really had neglected picking up White cards because, frankly, I just forgot about him.

D'Qwell Jackson was a successful 2nd round draft pick out of Maryland. He had some injury issues with the Browns but played well for them before being signed by the Colts after the 2013 season.

Darrell Hackney was an undrafted free agent out of UAB. He didn't make the team yet I now have 18 different cards of his in my collection, including four autographs on cards where he is in a Browns uniform.

For the Mizzou collector, here are a couple of cards of former Tight End Martin Rucker, He only played in a handful of games with the Browns, catching two passes. I now have 33 different Rucker cards in my collection, including nine autographed cards.

I had a parallel of the Alex Mack card, but didn't have the base card, The Browns missed him at Centre this year, but had to know that he was going to opt out of his contract when he was able to last season, and that he wasn't going to re-sign with them. He wanted to go to a winning situation, and has really helped the Falcons. I wish him luck in the playoffs!

An old roommate is a big Washington State fan so I knew quite a bit about Jerome Harrison before the Browns drafted him. I'm always happy to add more of his cards to my collection.

The Browns don't draft many players out of Ohio State, and I'm not sure why. I believe that Brian Robiskie was the last Buckeye that the Browns drafted.

The bottom Robiskie card was one of a few cards that were thrown in that I needed. Either I missed it, or it wasn't listed, but I am very happy that it was included.

Joe Thomas is, without doubt, the most successful Browns player since expansion in 1999. It was announced that he made his tenth straight Pro Bowl this year, one of very few players to have ever done so. He has made the Pro Bowl each year that he has spent in the league. Not knowing this year's All-Pro team, he has made eight of the nine All-Pro teams in his career (seven 1st team and one 2nd team). He will be in Canton one day which is why I was thrilled to get these cards.

Moving on from Thomas and his success, let us go to Browns Quarterbacks.

Staying with the skilled positions, lets see some other offensive players.

The Dante Lavelli card is nice following my last post of buying a mini helmet with his autograph, and is also a preview of an upcoming Black Friday COMC post.

Any time I look through my cards, or assemble a post like this, I miss Fleer and Pacific. Even if their cards weren't original I enjoyed them.

A couple of play-makers that the Browns drafted. Although each made the Pro Bowl in 2007, neither had quite the career with the Browns that fans were hoping for.

Hmm, looking at it, that SP Authentic card doesn't belong in my collection, it's a Jets card. Oops. Well, I did ask for it.

That brings me to confusing Browns cards. Well, I know they are Browns cards, but sometimes other people think differently.

The cards on the left show the Browns uniform but have that small print mentioning they are with different teams. The cards on the right have the different uniforms but are indicated to be with the Browns. All have good enough reasons to be in my Browns collection.

And I did get a few cards of defensive players.

Some more D'Qwell Jackson, along with a couple of parallels. You would think that finishing with a final Score parallel would be a good way to bookend the post, but there are a couple more cards to show.

Some other cards were thrown into the package outside of what I requested, and they were beautiful vintage ones.

The Don Paul was needed for my collection, but I have yet to look to see if the other two are upgrades or not. In any case it was a great surprise to get them.

ARPSmith, thanks again for the wonderful cards, and I'll keep looking for interesting Giants to send your way!
Posted by Angus at 02:05