Falling behind on posting so let's catch up on eBay purchases

Yesterday finished a very busy period between work and my choir's Christmas concert schedule. Our final concert went well but due to weather we didn't quite get the crowd that we wanted. I had quite a few friends that didn't make it out. Too bad, they missed a good show.

However, while I was preparing to sing yesterday, a friend that I share my PO Box with was driving home from Ogdensburg where he picked up my mail. I had three card packages - two eBay wins, and my COMC Black Friday shipment (which included other cards purchased throughout the year).

The COMC shipment will be providing me with many days of posts, and I have a few other days of posts to create from a trade post and a Sportlots purchase, but I'll post now about the two eBay purchases that my friend delivered to me.

These are the 1988 Browns cards that I was missing. I have really been working on my Starting Lineup collection over the last few months. I've been meaning to post about them for a while, but I'm down to needing only one sealed Browns figure out of the twenty one that were issued. And that missing figure is the Brian Brennan. It is nice to at least have his card right now. 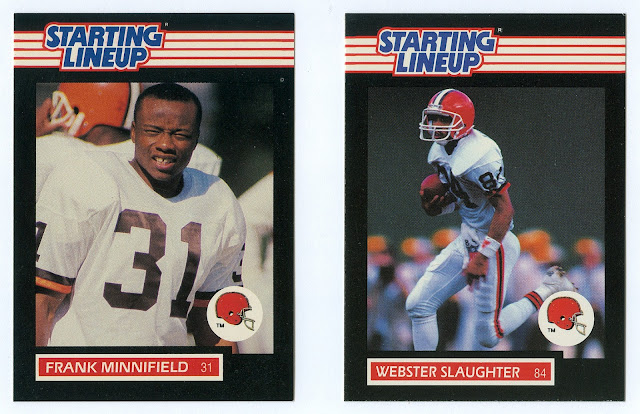 As stated above, these almost finish the 1989 set, I just need the Earnest Byner card that wasn't released with a figure. It could be hard to find.

The 1990 set had two cards for each figure - a regular card, and a yellow "rookie year" card. Even though there were two different versions of the Bernie Kosar figure (brown and white jerseys), they shared the same cards so there were only four players to find. I already owned both of the Eric Metcalf cards, so that left these: 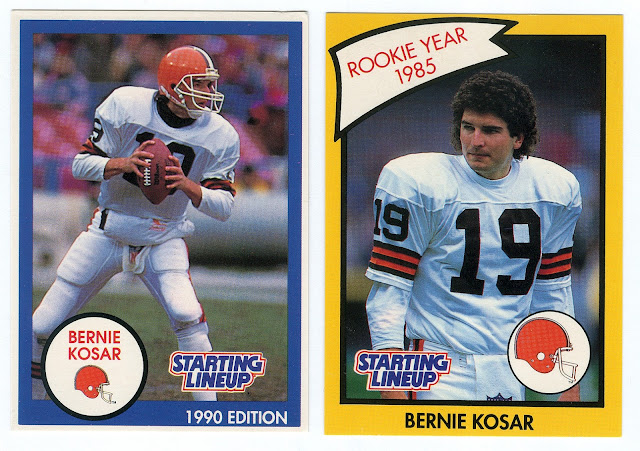 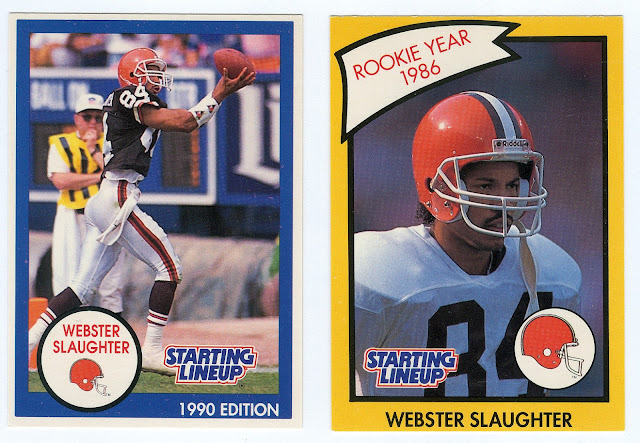 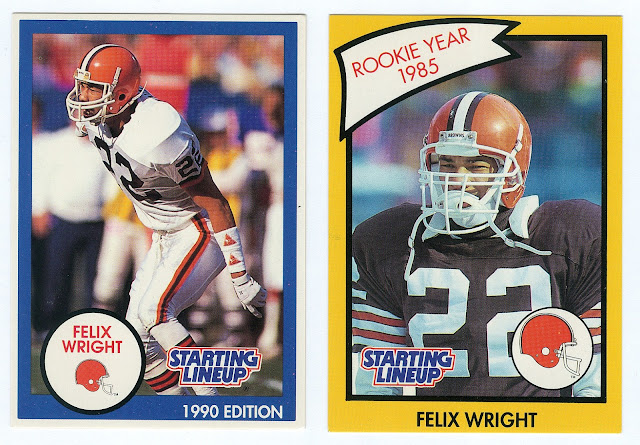 I knew that I needed the eleven cards shown above, but I scanned the following three cards not knowing if I had them or not because there isn't a checklist on the Trading Card Database for 1990 Starting Lineup cards yet. (Maybe I should look into posting one.)

Anyway, I should have looked at my previous blog posts because I've shown the Newsome before. I needed both Couch cards though.

When I looked at the original auction post, it was starting at $19.99, and I thought that I had needed fourteen of them. Shipping was a reasonable $2.99, so I had to ask myself, how high did I want to go to pretty much complete the Starting Lineup cards that I needed?  I put in a decent bid with 5 days to go in the auction and then waited, always wanting to boost my max bid since if I tried to buy them individually they would be a lot more than I was bidding.

I waited for the days to pass, and then actually sat at my computer as the auction was winding down. As it turned out someone tried a token snipe bid with about 10 seconds left, but they only bid $21.50 which pushed my bid to $22.00. That is where the auction ended. I think it was a real steal.

Well, that wasn't all from the same seller and the first package.

As with most auctions I bid on, I will look to see if the seller has any more Browns auctions (or Buy It Now) on the go. This seller did. It looks as though he was selling his Browns collection - and good for him at collecting all of these Starting Lineup cards! (Other than the Byner, all he was missing was the 1994 and 1995 Eric Metcalf and Michael Dean Perry cards which I already owned.)

As it turned out, the seller had another lot that interested me. He was selling was a lot of Browns cards from the 1965 Philadelphia set. The lot didn't contain the Paul Warfield rookie card, but it did have the last two Browns players cards that I needed from that set. (Silly me will still try to get the checklist where they list the team.) 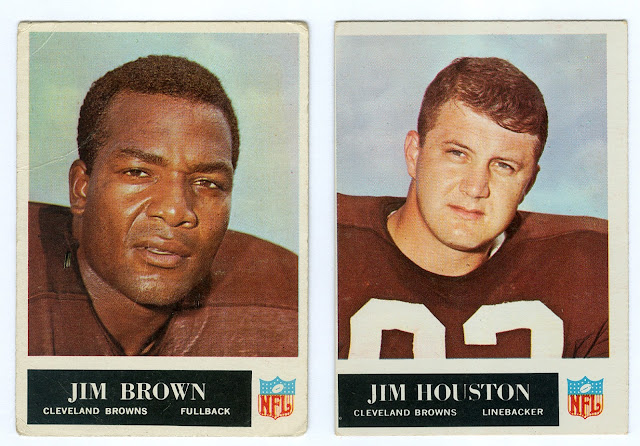 The picture in the auction didn't show the creases in the upper left of the Jim Brown card, but I could see the rounded corners. No matter, it isn't as though you find many cheap vintage Jim Brown cards, and really I haven't seen this one available for less than twenty dollars, even in worse shape than this one.

The Jim Houston card is his rookie card that I just hadn't been able to find before, but to be honest, I really didn't remember to look for it very often.

Pretty nice pick-ups, but when I went to finalize my purchase I found out that the dealer didn't combine shipping. Oh, well, the auctions were still worth it.

Oh, and if you were wondering, yes, the seller did ship them in the same envelope, but I'm sure that it was more than the $3.99 that one auction alone would have been so I'm not worried about it.

The funny thing with these two auctions is that I'm not sure which one is my favorite. I love getting a vintage Jim Brown, but I love oddballs and getting all those missing Starting Lineup cards in one shot at such a great price...  I guess I should just enjoy both of them!

There was also a second eBay package. Although it isn't as interesting as the one above, it was also a lot cheaper!

I won an auction for 44 Browns cards, mostly from this year for one whole dollar, with $3.50 shipping added to it.

Again, the auction picture showed the cards included, and I knew that I had most of them, but I did need the following, and they were easily worth more than I paid. 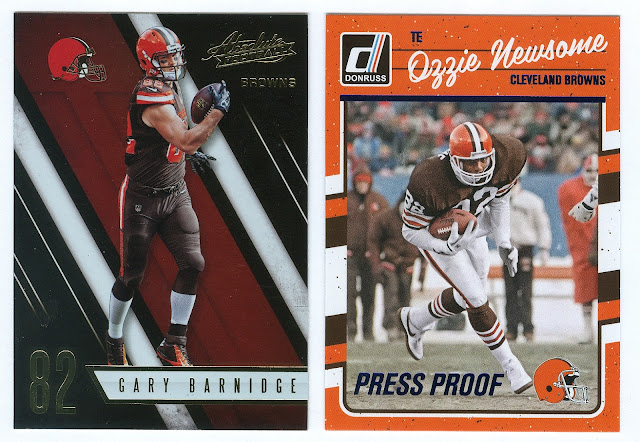 The Barnidge was the last veteran base card that I needed from this year's Panini Absolute Memorabilia set.

That is actually the 2016 Donruss - Press Proof Blue parallel for Ozzie Newsome even though it kind of looks purple. When I move it around, it needs the right light to look blue to me. 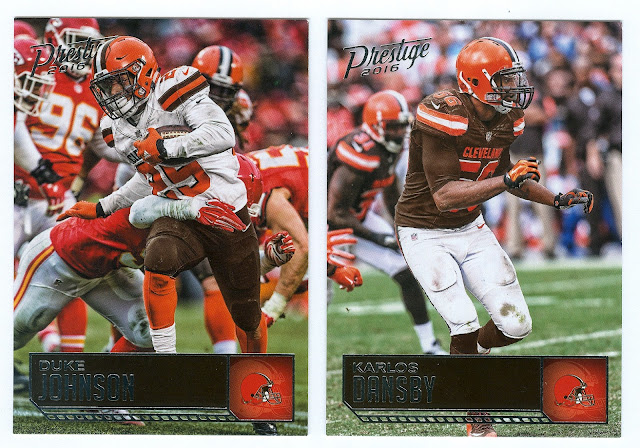 A couple more veteran base cards, this time from this year's Panini Prestige set. As much as I like Dansby, and was upset that the Browns let him go before the season, I think that he was replaced as a starter by Christian Kirksey who I consider to be one of the better players on the Browns this year. 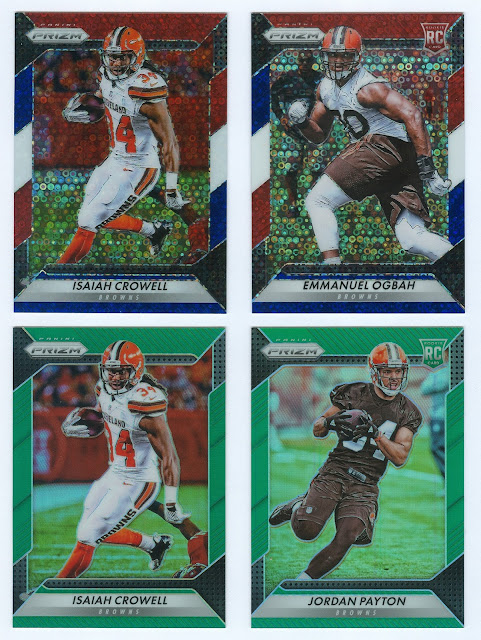 Some of this year's Panini Prizm parallels. The top ones are Red, White and Blue Disco parallels. Ummm, okay. The bottom ones are just plain old Green parallels.

With just these cards, I would have felt the auction was worth it, but there was still one more card that I saw in the photo that added to my bidding on it. 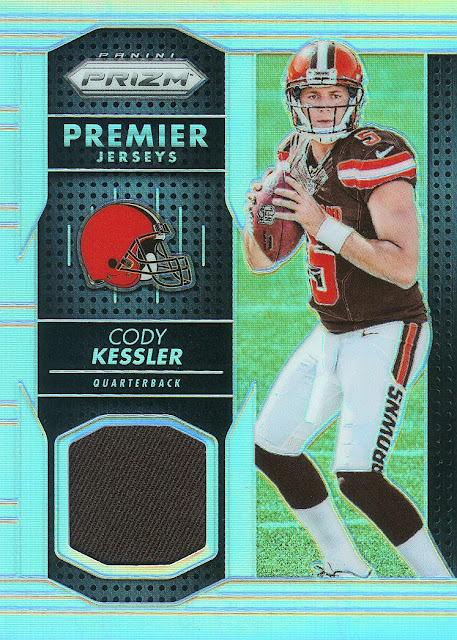 A relic insert card of this year's rookie quarterback? As part of an auction added to the other needed cards above for less than $5.00 including shipping. Okay, I'll take it!

I would say that I don't know why someone else wouldn't have jumped at this at all, but then I remember that it is the Browns, and I know how hurt I feel with how the season is going, and I figure that other fans might just be finished caring for the season. I can't blame them if they are.
Posted by Angus at 01:14