I'm posting this from my mom's house in Scottsdale and don't have access to a scanner so I'm going to use my Blackberry's camera.

Like many other bloggers, I joined the Secret Santa group that Matt organized. On Tuesday, just before I left for the airport, I checked my mailbox and saw a nice bubble wrap envelope sitting there for me. I threw it in my carry-on bag to open at the airport. As it turned out, I had plenty of time to look at the cards as my flight was delayed just over two and a half hours.

Opening the envelope I discovered that my Secret Santa was AJ at The Lost Collector blog. I had enjoyed reading his blog but hadn't had any dealings with him in the past so it was a nice way to be introduced to someone new.

He sent me a six-pack of Browns cards. Santa must have known that this is just what I wanted!

Top left, we have a 1950 Bowman card of former Browns Guard, Alex Agase.

As with many of the early Browns, he was a veteran of World War II. The final line on the back of his card, which I would copy if I were on a computer instead of my tablet, reads: "Led Marine extreme right flank, Okinawa."

Bottom left is a 1950 Bowman card of Halfback, Dub Jones. The back of his card summarizes his war service with: "Served 3 years aboard a submarine."

Do you think these guys would have chuckled at all of the color analyst's comments of football being a battle and all the other war comparisons?

To the right is a 1953 Bowman card of Tom Catlin. He is a one-card wonder and I'm happy to add his only card to my collection. (A funny thing is that when I first looked at my wantlist I didn't even see this card listed so I thought that AJ really found one that I had no idea I needed. As it turned out it was there and I was just blind.) 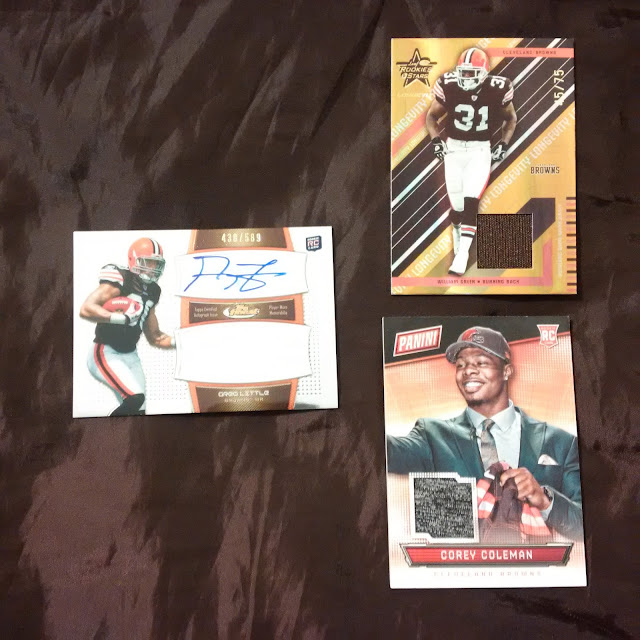 Here are the modern cards that he sent.

On the left is a 2011 Finest Autographed Jumbo Relic of Greg Little, numbered out of 599.

Top right is a 2004 Leaf Rookies & Stars Materials Gold card of former Running Back, William Green, numbered out of 75.

And the bottom right card is a 2016 Panini The National hat relic card of first-round pick, Corey Coleman.

And thanks to Matt for organizing this.

Now to hope for a Christmas miracle of the Browns winning tomorrow and avoid the winless season because I really don't see them beating the Steelers next week.