P-town Tom at the newly re-named Eamus Catuli! blog started a contest to ask what is the favorite 2016 card that you've added to your collection.


Now this wasn't asking me what is the favorite card that I've added to my collection in 2016, because that would be easy, getting a Jim Brown rookie card. No, this question wanted a new 2016 card.


After looking through all the 2016 Browns cards in my collection I became a little depressed. It really hasn't been a good year for cards, and a lot of that comes from the 0-13 record that the Browns own this year.


Giving it some thought, I found my winner.


﻿
Why this card? Well, first things first, it is a card that I picked up at the card show in Syracuse where I had a great time, and met Night Owl.


Second, it was the day before the season started. I knew it would be a rough year, but I still had optimism, and looked forward to watching the season pass. Now, of course, I just want it to end! (With at least one win in the final three games, please.)


Third, I got a good deal, on a low-numbered card. 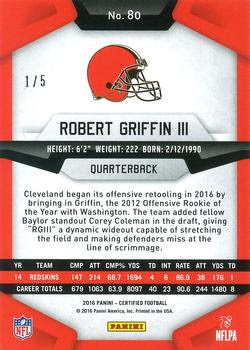 I wasn't expecting to find a card numbered out of five at a show. And was more than happy to pick it up.


Sadly, the season has worn me down. I still watch the Browns games, but after their game is over I just want to get away from watching football. I haven't been watching too many Sunday or Monday night games recently, usually just catching parts, or the end of the game. I can't remember the last time that I felt this way about football. Oh, wait, yes, I can. When the Browns moved to Baltimore. Ah, well.


Anyway, I would probably have other choices based on the photos or designs in other years, and may even feel differently about my 2016 cards if you asked me again next year, but at this moment of time, this card is my winner.


I know the contest mentions "one card", and that is it above, but I felt that I should have more than one card in this post so I've added the following two cards. 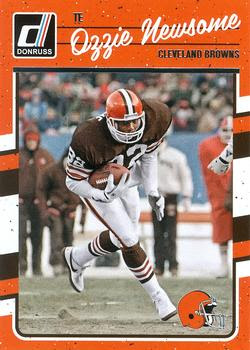 Ozzie has always been a favorite player, and I like seeing him still included in current sets. Other pluses to this card are the fact that he's wearing the old traditional uniform, as opposed to the current uniforms, and the fact that the color scheme on the cards matches the Browns colors at the time. (The other Browns cards in the set have a brighter orange that matches the orange on the current Browns uniforms.)


I don't think that anyone would have expected Cody Kessler to be starting for the Browns in Week 3 this season. I have been encouraged by his play as a rookie, but there is still a lot of room for him to develop. (Don't hold on to the ball for so long!)


I like having a signed rookie card in his Browns jersey and helmet, but I have to wonder, where are his legs!!!


Thanks, P-town Tom, for giving me a look through my collection.