I went into today's Browns game hoping for a win tonight regardless of whether it cost them the first overall draft pick. As it turns out, my Christmas wish came true! The Browns won their game and then the 49ers also won leaving the Browns in position to keep the first pick.

I really didn't want the Browns to join the Lions as the only 0-16 team in NFL history and now I don't have to suffer the jokes that would come along with that record.

I'm thankful for the win. It really puts me in a good mood for Christmas.

Yesterday I bought myself a Christmas present with money that my boss gave me for Christmas. It isn't a card but it is Browns related. 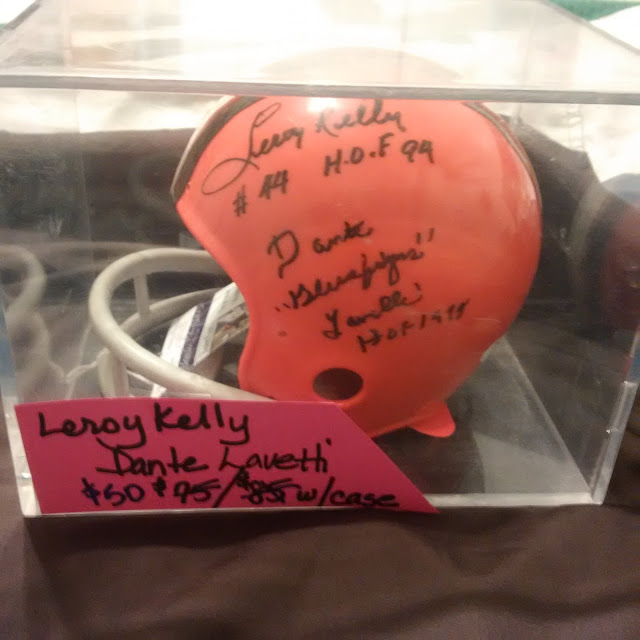 Getting a mini helmet signed by two Hall of Fame players, with a display case for $50? Yeah, I'm okay with that! What a nice Christmas present from my boss.

I think that I mentioned that my choir had a busy Christmas season. What I didn't mention is that I had a solo this concert season. Our director approached me before the season and said that she had a solo she would like me to perform. I was flattered and then she said that it was a non-singing solo! I didn't know what to think of that!

Anyway, she asked if I could learn a version of "'The Night Before Christmas". After listening to an audio recording of what she wanted me to do I said that I would give it a try.

One of my friends recorded it at our final concert and sent me a copy that I will share with you. I hope you enjoy the effort that I put into this.

Thank you to Dr. Jim Henry of the Gas House Gang barbershop quartet for this version.

Merry Christmas, everyone! I hope Santa is good to all of you!
Posted by Angus at 22:02