Night Owl trying to trick me

Breaking away from the Browns for a post, I received a nice little envelope of cards from everyone's favorite Night Owl.

To put a smile on my own face, I'll start with the Mets two World Series wins. 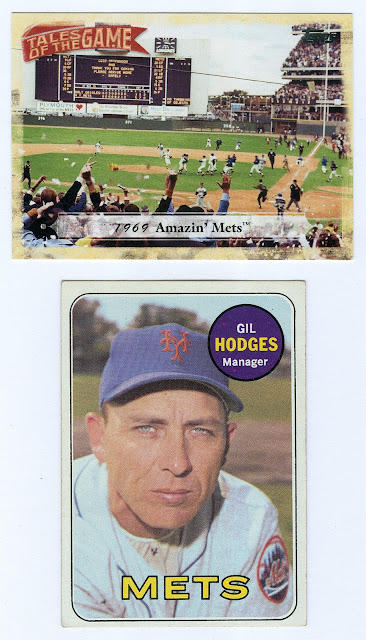 For the time being, I will use this Gil Hodges manager card to represent him as a player in my Opening Day Lineup project I am working on.﻿

Dwight Gooden looks so young in this picture.

Gary Carter was and is still my hero. He is the first sports hero I had as a kid. I became a catcher. I wore number 8. His trade to the Mets cemented my allegiance to that team. (I always had a soft spot for the Expos, being the nearest team to me growing up, but I kind of liked having a team that I could cheer for that would cheer against my dad. The Mets were that team until the Carter trade, then they became my favorite team.)

As for Bob Ojeda, one fun question to ask a baseball fan is which Mets pitcher led the team in wins and ERA in their World Series winning year of 1986. He is the answer. He was a good pickup the off-season before from the Red Sox and had a win and no-decision against them in the World Series.

Oh, wait, the title of my post is about Night Owl trying to trick me. Well, let's get to that. So, one of the first cards that jumped out at me was a Sportflics card, which as you know don't always scan with the picture that you want them to. This one kind of did. 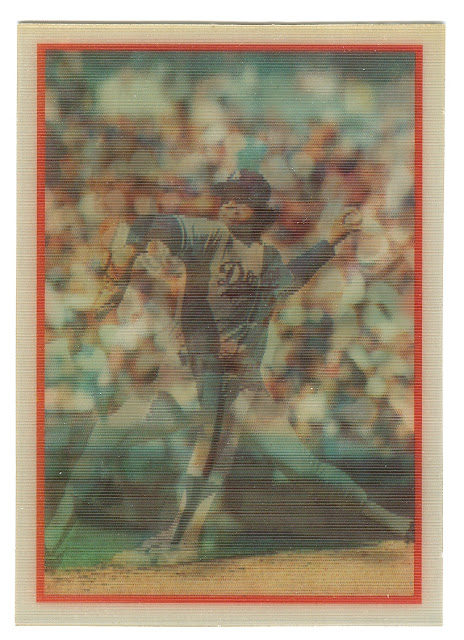 I saw Fernando Valenzuela and wondered why he was sending me a Dodgers card, which is what you see here.

However, by playing with it, and cheating and looking a the back, I soon came to realize that it was a Mets card in disguise! 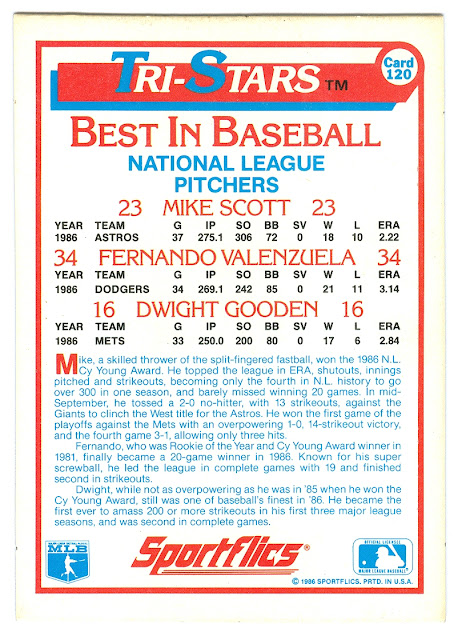 Cool Dwight Gooden card, right after the 1986 World Series. And, man, did Mike Scott pitch great against the Mets in the playoffs.

Look, I'm Canadian, and I've sent many of you OPC cards. Matter of fact, I even sent Night Owl an unopened pack of 1990 OPC to play with...
Oh, you tricky Night Owl. You probably pulled that Keith Miller card in the pack I sent you.
But really? That Jeremy Reed, that's not O-Pee-Chee.
And, now, on to some of the other cards that he sent.
One reason I liked the Mets as a kid? The names on the team. I mean names like Matlack, Koosman, Seaver, Kingman and Kranepool. Those were fun names for a kid in the 1977 set that I first started buying baseball cards with. Nice to see Matlack here.
And I have always loved a side-arm delivery, well, except when as a left-handed batter I had to face a lefty side-arm pitcher. I didn't really like that. Anyways, good to see the Innis card showing the side-arm delivery.
A nice mix of years, including last year's post-season victim. (Sorry, Night Owl, Utley is dirty and didn't even start his so-called slide (tackle) until he was at the base. But I do agree that the rule didn't need to be changed - just call interference.) And hopefully Dilson Herrera will be the future at some point.
I appreciate all that Dillon Gee did for the Mets in his years there and hope that he plays well in the future.
And for the Mets future? I just hope that the young arms stay healthy for years to come!
Thanks for the great cards!
Posted by Angus at 20:26