Having my PO Box in the US, I very rarely get the experience of coming home and finding an envelope waiting for me, but yesterday gave me that pleasant surprise! The funny part was that I arrived home late after my choir's first concert of the Christmas season.

Why did the envelope arrive to my home? Well, to avoid having to go through customs. It came from the waxaholic, Captain Canuck, in Calgary.

I had no idea what to expect, and when I opened it I was pretty shocked: 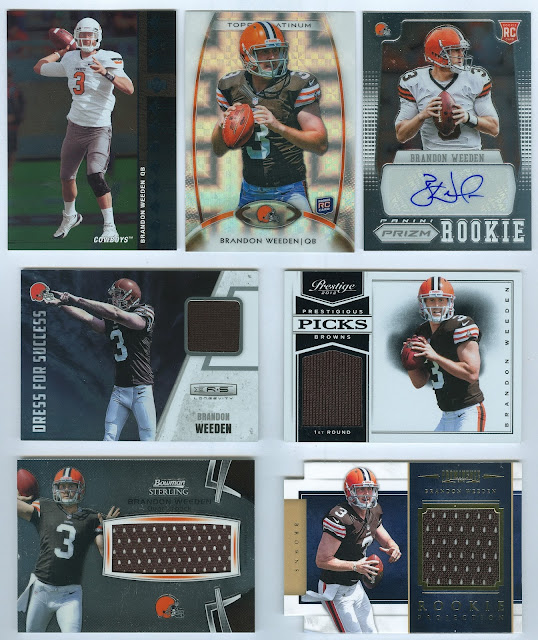 A whole lot of rookie year Brandon Weeden cards, and a note hoping that I can give these Brownies a good home.

Amazingly, with all the memorabilia and autographed Weedens I already had, I needed all of these cards but one, the Topps Platinum Xfractor top center. But I've already got a home in mind for it.

I believe that Brandon Weeden is number 18 out of 24 Browns starting QBs since 1999.

That seems like a lot, but for fun, and comparison purposes, I decided to check what number starter he was for the Dallas Cowboys since 1999. I was rather surprised. He was 17th out of 18. The Cowboys used 9 different starters from 1999-2002. I so forgot about that.

Anyway, a big thank you to Captain Canuck. They have found a home, even though he didn't give me great memories. Anyway, I've got a couple of things in mind to send you in return. Expect something soon.
Posted by Angus at 23:50