So, like a lot of other bloggers, I'm going to follow the Junior Junkie's lead and create a page of nine favorite cards from my collection.

Right off the bat, I knew what four of the cards would be, there wasn't even a question that they wouldn't be included. Some of the others surprised me since I bypassed some very nice cards, some great autographs and low numbered cards in putting this together. And I did put the cards into a page to scan, taking one card out of a protector that it had been in for over 20 years!

Here is the page that I came up with in the last few days: 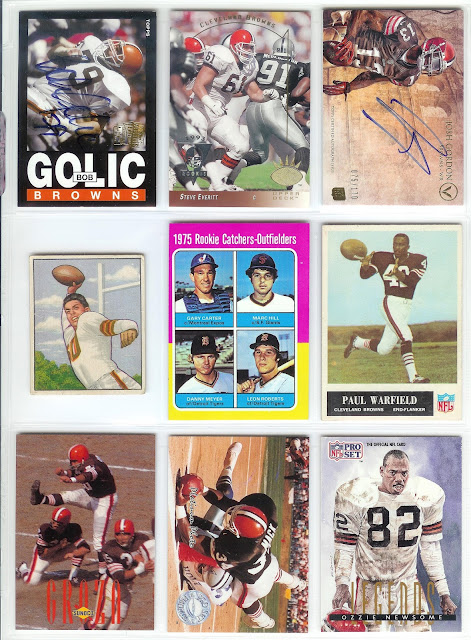 ﻿
My collection is a Browns collection, so people should have been expecting to see the Browns cards, but the place of honor in the center had to go to my all-time favorite player from childhood. Go figure, a baseball card.

Anyway, on to the reasoning for each.

I found this card at a card show in Albany when I drove down there for a Straight No Chaser concert, and happened to spot a sign for a card show on the outside of a hotel. At the show, flipping through one dealer's cards, I found this card for $4.00. There was no doubt that I would buy it - I needed it for my collection - but my first thought in buying it was to show one of my oldest friends, my old roommate that gave me my Kosar rookie card that I mentioned in a previous post. He is a Raiders fan, and I knew he'd get a laugh out of me finding a Browns Golic autograph instead of a Raiders one that he would like. Second of all, I've always liked the 1985 Topps design, and lastly, how could I not love one of the stars of Saved By The Bell: The College Years?

However the real reason I included it here was seeing him at the Cleveland Browns Fan Fest that I went to. After finishing his panel, he went to the side of the stage and sat there and signed autographs until I think everyone around got one. (I asked him to sign my Fan Fest ticket.) He had a great attitude, and joked with people as he signed. A true class act, and that small personal connection was enough that when I saw this card in my collection, that I wanted to add it to my page.

This card is another one that is pulled due to a personal connection. Steve Everitt is the first former Browns player that I was lucky enough to meet, and even though I was a big fan of his while he played for them, I became that much more of a fan after talking to him. I'm going to have a spotlight post on him later this week where I will tell the story.

As for this card, as common as can be, the reason that I chose it is because the Browns were playing the Raiders. Those games are always fun to watch with my friend.

Football cards have taught me a lot of the history of the game. I discovered Otto Graham's career thanks to an old Pro Set insert card. I then did my own research to find out more about him. Then when my friends and I went to the Pro Football Hall of Fame, one turned to me and commented that the first half of the Hall seemed to be the Otto Graham Hall of Fame.

When I had the opportunity to buy this creased copy in Binghamton this summer, there was no way I was going to pass it up. It is the oldest card in my collection, and one of the four sure things for this page that wasn't going to change.

Gary Carter was my hero growing up. He will always be my hero. After watching him in Montreal, I became a catcher. I wore number 8. And when he was traded to the Mets, I became a Mets fan. I loved his smile and his love of the game.  I was so happy to get his autograph on the back of my ticket stub through the netting behind home plate in Montreal before a game. I still treasure it.

There was no doubt that this card would be the featured card in my nine. And frankly it is the only baseball card I wouldn't want to do without. I always wanted a copy of this card, and bought this one on ebay last year when I decided to get back into card collecting, even though it isn't football, and it isn't the Browns.

This is another of the four sure things of the nine. This card sat in the display case at a local card store for years while I was in college and the card explosion hit and football cards became readily available to me in Canada. I kept looking at the card, and looking at it, wanting it, but not being able to justify spending the money on it. Finally I broke down and bought the card in the early 90s, and it had been in a protector ever since. Today is the first time in a long time that I've held the actual cardboard of the card in my hand.

In a visit to the Pro Football Hall of Fame last October I picked up one of the those packages of 50 Cleveland Browns cards. In it was a Jim Brown card that I couldn't identify. After doing some online sleuthing I found it was from the 1992 Sunoco Browns Hall of Fame set. I quickly found and bought a copy of the set on ebay, and then added it scans and all to the Trading Card Database. There were great action shots in the set, and this was probably my favorite of them. A great shot of "The Toe".

This card immediately came to mind as a definite when thinking about this page. As I previously wrote in my showcase on Kevin Mack, this card might be my favorite Browns card ever.

Ozzie Newsome and Clay Matthews are my two favorite Browns players. They were both drafted by the team in the first round of the 1978 draft, and I guess I was at the right age to watch both of them in the peak of their careers. Hopefully Clay will join Ozzie in the Hall of Fame.

I loved this card when I pulled it from a pack and own many copies of it! I'm a little surprised that I put it ahead of so many of the action shots that are out there, but I also feel a lot of the art cards are amazing as well.

I'll have to make a post some time later with a bunch of the honorable mentions that didn't make this page.
Posted by Angus at 15:44