I'm just going to start this with a link to Gordon Lightfoot's song "The Wreck of the Edmund Fitzgerald" to commemorate today, the 40th anniversary of its sinking:


Cutting that 40 years in half, here is about half of a card purchase of 1995 Cleveland Browns cards I picked up on Sportlots. We'll start with the quarterbacks: 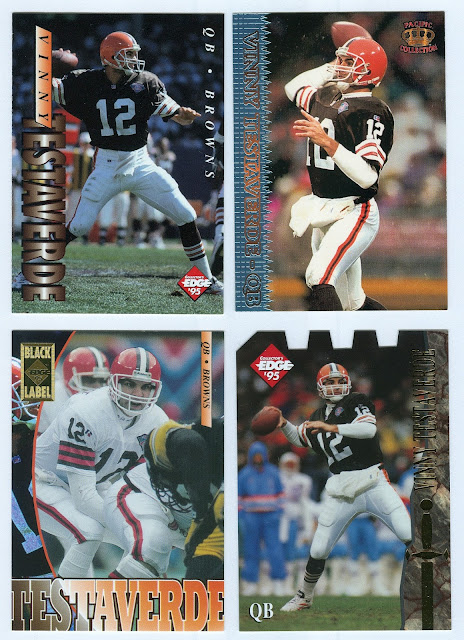 I had a bunch of the parallels, but didn't have the regular Testaverde 1995 Collector's Edge card that is top left. I really like the plastic of the old Collector's Edge cards, it really helps them keep their corners. The castle shape of the Excalibur die cuts are nice. This shipment put the number of Vinny Testaverde cards higher than those of Bernie Kosar in my collection. To me, that really shows the card explosion of the mid 1990s. 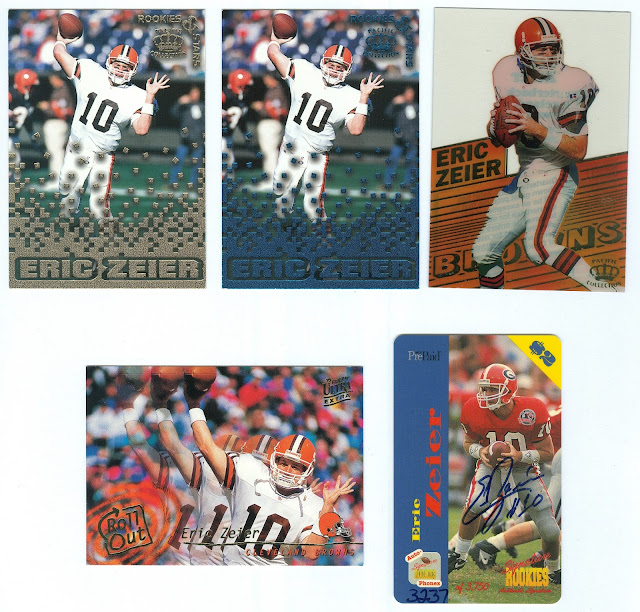 ﻿
Some Eric Zeier cards bringing my collection up to 59 different, with 5 being autographs. Although I had a few different Browns players phone cards, this is my first autographed one. The top right cards is a 1995 Pacific Triple Folders Crystalline insert. It is a clear plastic, and you can see some of the writing from the back coming through his white jersey.
Moving to running backs, I added more Leroy Hoard cards, although he still trails Eric Metcalf in my collection. 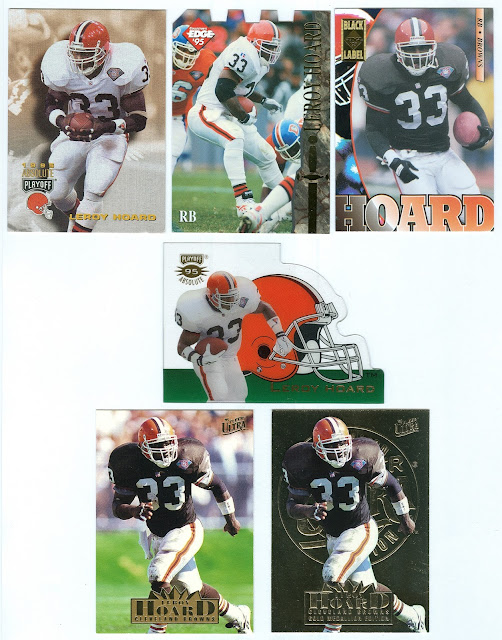 ﻿
A couple of base cards there with the Playoff Absolute, and the Fleer Ultra. It shows there are still commons out there that are needed.
A few more running back cards, including one Metcalf to try to keep a bit of a cushion on Hoard: 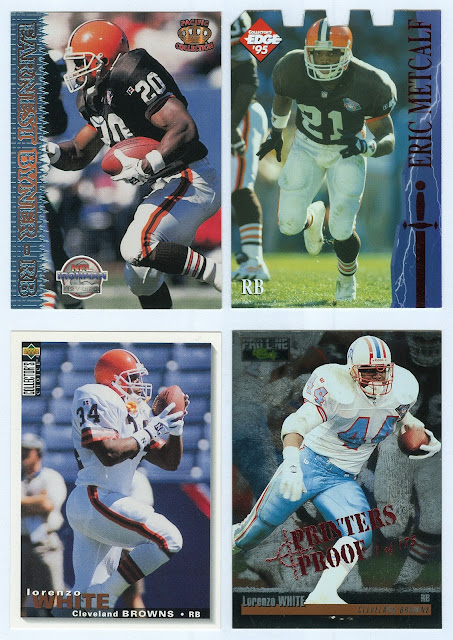 It was nice to see Earnest Byner come back to finish his career in Cleveland. As for Lorenzo White, when I restarted my collection he was one of the players that I had forgotten was a Brown, but then again I've tried to forget much of that 1995 season. My bitterness has not quite gone away.
On to a few wide receivers:
﻿ 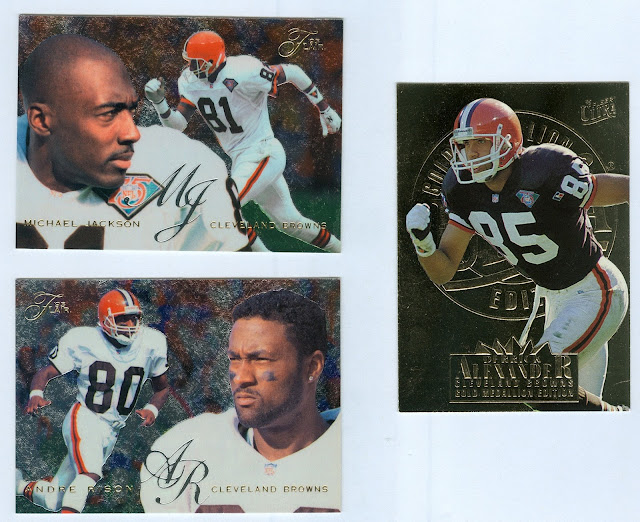 ﻿
I almost didn't include an Andre Rison card but figured it went with the Michael Jackson one. There were a couple more cards of each of them in the order.
On the defensive side of the ball I'll start with some Eric Turner cards: 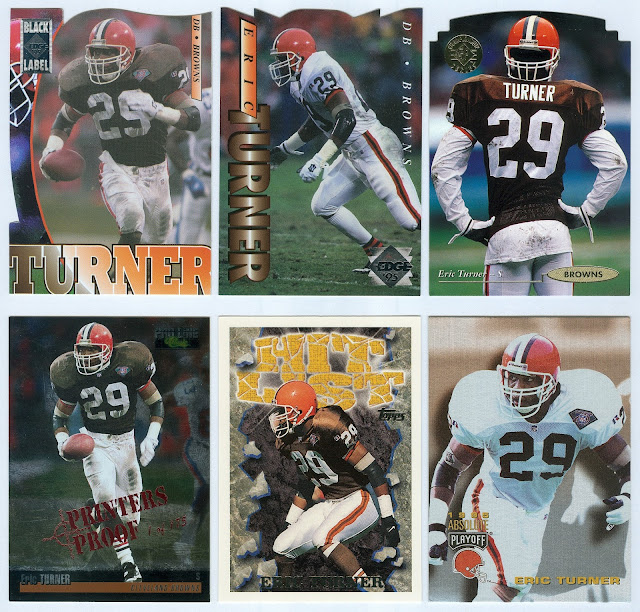 ﻿
I love the photo used in the SP Championship die cut card in the top right. The photographer's eyes must have lit up when he saw Turner wearing his helmet like that.
The top two cards below show two old Giants that Bill Belichick brought to Cleveland from New York. Most people won't remember them as Browns. 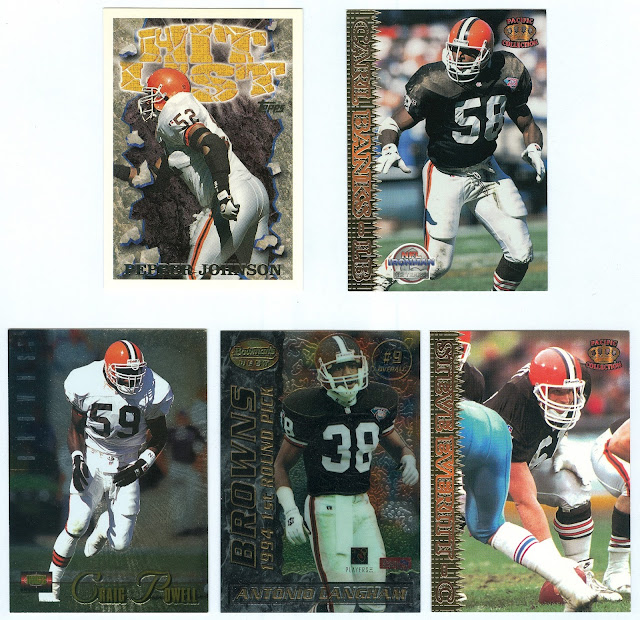 ﻿
The three bottom cards are all former first round picks. I like seeing Steve Everitt cards, and would love to see more Offensive Lineman cards.
I also picked up a couple cards from this century, although none of the players are still with the team. 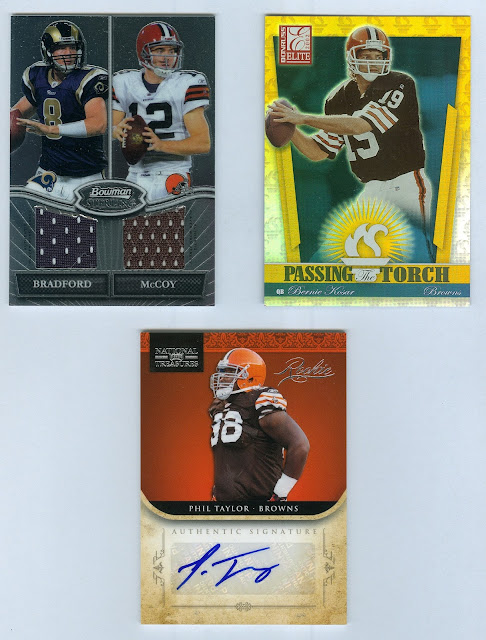