Browns Cards from the Dollar Store

A couple of months ago, I was surprised to find a nice envelope of cards in the mail. Looking at the return address, I saw they were from a fellow Canadian, Doug from the Sportcards From The Dollar Store blog.

Note, I said this was a couple of months ago. I'm a bad blogger. I was going to post something about receiving these, so I didn't send an email thank you...  And then I realized just how much time had passed, and just want to apologize for taking so long to thank you, and show some of the great cards that I received. 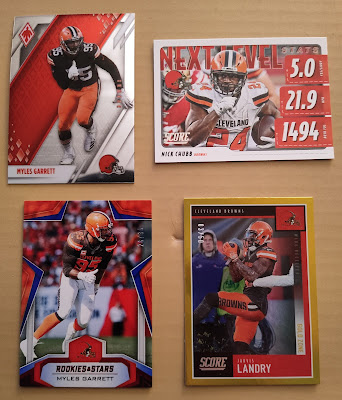 On the left are a couple of Myles Garrett cards. He missed today's Browns game after his single-car accident that he was lucky to walk away from. I hope that he means it when he says that this was an eye-opening experience and that he is going to change his driving habits.

The top left card is from the 2021 Panini Phoenix set, and the bottom left one is a Red & Blue parallel from the 2019 Panini Rookies and Stars set.

The top right card is a Next Level insert card from the 2020 Score set. Nick Chubb always seems to give it his all every game and is a pleasure to watch play.

The bottom right card is a Gold parallel of Jarvis Landry from the 2020 Score set. Jarvis Landry is playing for the Saints this year, and I wish him all the best. I think he really set an example of professionalism to the players on the Browns when he was traded for before the 2018 season. 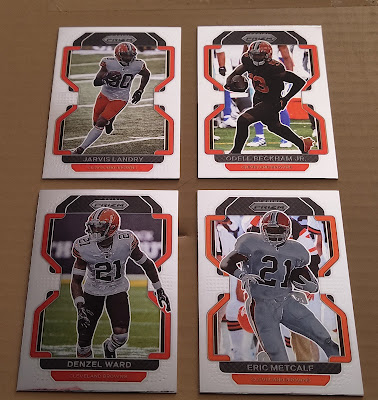 My camera work didn't really help the four 2021 Panini Prizm cards above. You can see part of the shadow effect on the Denzel Ward card from holding my phone above them to take the photo.

I really enjoyed adding a new Eric Metcalf card to my collection. He was one of my favourites when he played for the Browns. 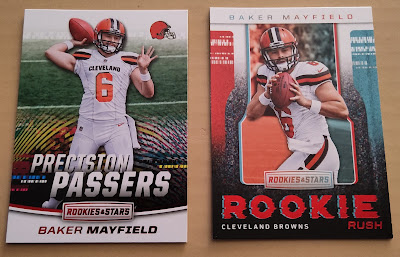 Here a couple of rookie year insert cards of the Browns former starting quarterback, and number one draft pick, Baker Mayfield. They are both from the 2018 Panini Rookies & Stars set.

I still like Baker Mayfield, and wish him all the best in his future career. I think the way things ended between him and the Browns was unfair to him, and even though I didn't think that he should have played hurt as much as he did last season, he gave it his all to try and help the team. 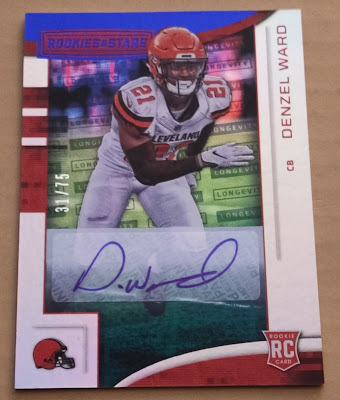 I was very surprised to see this card, and really have to thank Doug for this card. It is from the 2018 Panini Rookies & Stars - Rookies Longevity Signatures Blue set.

For some reason, the Browns seemed to have a stretch where they weren't drafting Ohio State players, no matter how successful they were. Denzel Ward was drafted with the 4th pick of the 2018 NFL Draft. 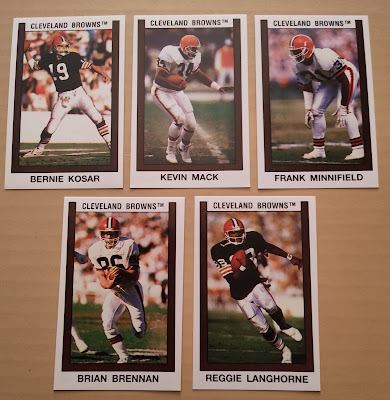 These 1989 Panini Stickers were among the cards that were sent. I remember buying these stickers and trying to finish the sticker book. These stickers bring back many fond memories of collecting, and of these players from the late 1980s Browns teams that I loved so much.

Doug, thank you so very much for the package, and I'm really sorry that I didn't send you a message that I had received it. The cards and stickers were greatly appreciated.