Among the cards in this post are some more parallels that I needed.
These refractors were really picked up by the printer, and are pretty easy to identify when looking at them in hand. I still need a lot of Xfractors, so was happy to add this to my collection.


I went to Browns training camp in 2012 and wanted to buy a new Browns jersey. I almost picked up a Hillis jersey but went with a Colt McCoy jersey instead. Sigh.
You have to like the 00 that Little is wearing in so many of his 2011 cards, but at least it shows him in a uniform.


I was happy to see Jabaal Sheard do well with the Patriots. He was a player that got lost in all the turnover with the Browns coaching staffs and the ever-changing defensive systems.


Josh Cribbs was always exciting to watch. He was one of the few constant bright spots on his years with the team.
Best wishes to Travis Benjamin playing with the Chargers this year. I'm sorry to see him go. With his speed you never knew when he would break one.


D'Qwell Jackson was another favorite that was let go when the coaching regime changed.
These cards always looks so familiar but that is because between the base cards and the parallels that I own of this card, they make up 5 of the 9 Miguel Maysonet cards that I own.


The funny thing with this card is that Miguel Maysonet has an Eagles card in the main Topps set, after he signed with them as an undrafted free agent in April 2013. The Eagles cut him in late May, and the Browns claimed him on waivers before eventually releasing him at the end of August. Topps changed the front, and the color scheme on the back of the card, but the text remained the same. 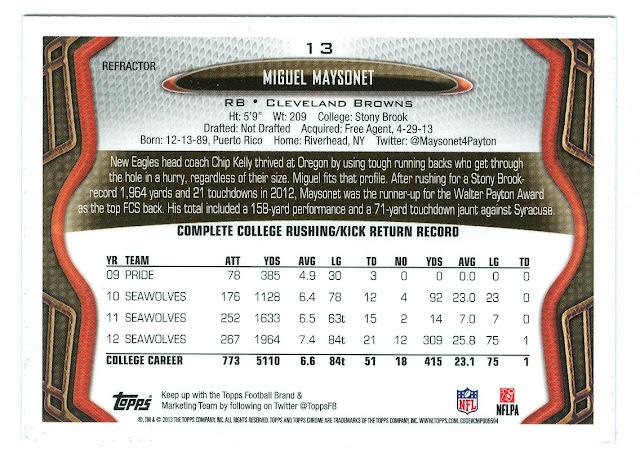 When I first read the back of this card I was confused as to why a Browns card would have anything to do with the new Eagles coach, Chip Kelly. I thought that Maysonet may have played for Kelly, but no. Then when I saw that his card in the base set was with the Eagles and I figured out why the text is how it is. It was just interesting that they would find a new front photo, and change the color scheme on the back of the card but not update the text.


I'd like to finish off this post with a shout-out to Corky at the Pack War blog and congratulate him on the blog's seventh anniversary! He is a great trading partner, and I was lucky enough to meet him to trade in person in March. Great guy that he is, to celebrate he is having a contest. Check it out!