I had a great time in San Diego and was very happy to see some friends that I only get to see once a year. I hate having to deal with the change in time zones coming back from the west - I really didn't want to get up this morning.


I did find some cards at the Comic-Con. 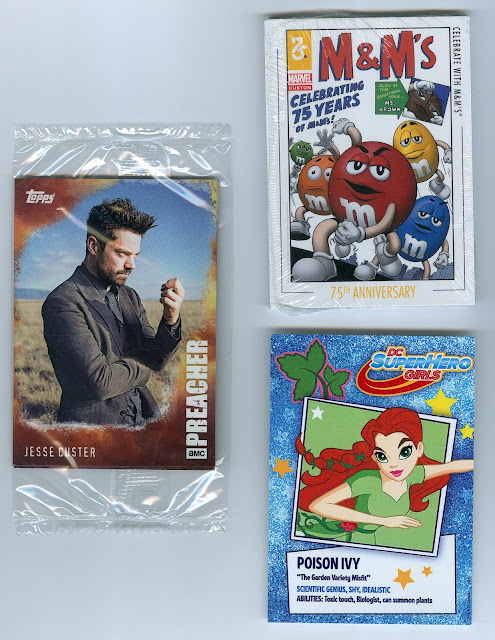 The M&M's cards were put out by Marvel Comics and picked up while walking by their booth.


I picked up the Preacher cards and the Poison Ivy card at different times in the DC Comics booth. 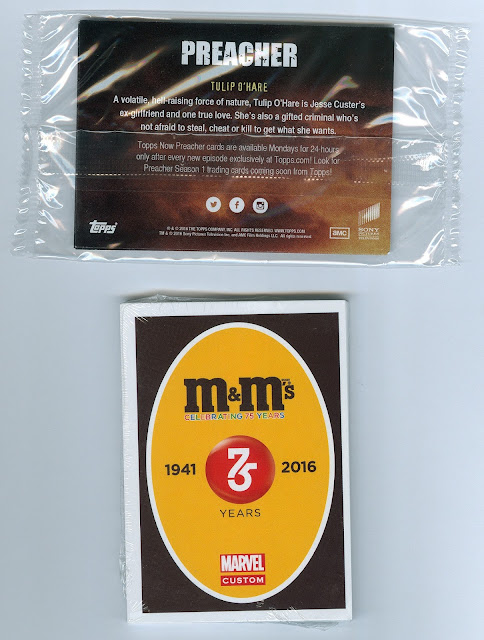 The Preacher cards are promos for Topps Now. There are three in the package and they will be shown below.


I haven't opened the M&M's cards yet, but thought that I would show the back.


There was nothing on the back of the Poison Ivy card so I didn't show it. 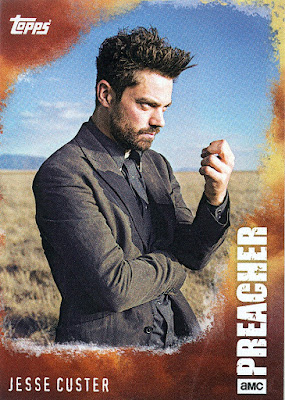 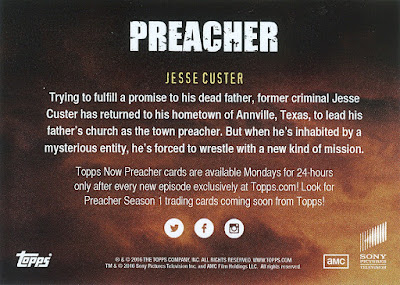 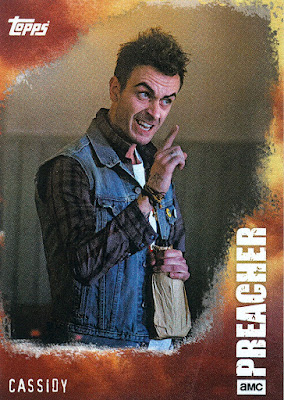 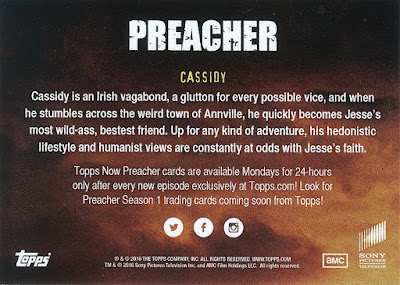 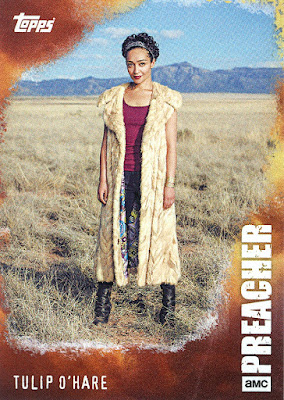 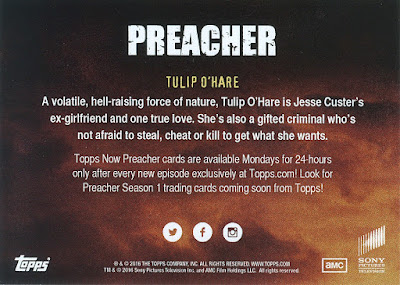 I bought a sealed "football" box from one card dealer. I already had the three Browns cards in the set, but figured that it would be a fun set to put together. 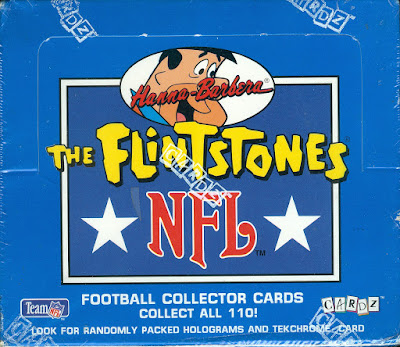 This product came out in 1993, and as you can see on the box the set contains 110 cards and there are randomly packed Hologram and Tekchrome cards to look for.

The set breaks down as follows:

Cards 1-28 are Draft Picks cards for the 28 NFL teams
Cards 29-56 are Schedule cards for each team
Cards 57-84 have Team Stats for each team
Cards 85-100 are Stone Age Signals showing different referee calls.
Cards 101-110 are a little different - they don't have gloss on the front and are not colored. They are meant to be colored and have facts or games on the back. As it turns out there were one of these cards in each pack unless it was replaced by a Hologram or Tekchrome card.

Searching the checklist at Beckett, I discovered that there were three Hologram cards and one Tekchrome card to find.

Here are the three Browns cards from the set, and their backs:
﻿
﻿ 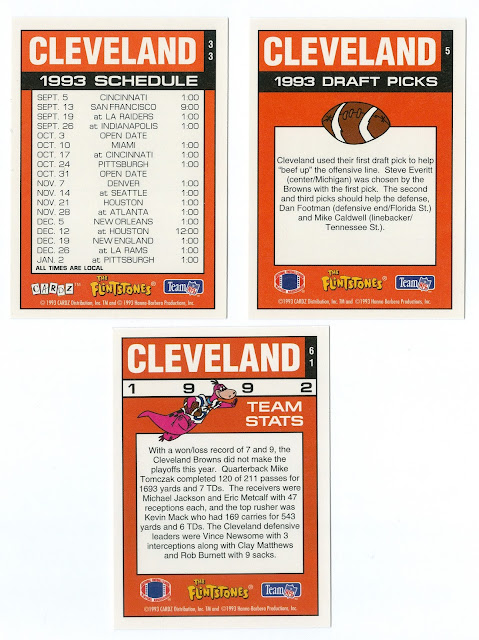 I like how Barney's number changes on his two cards.

Here is a sample of a Stone Age Signals card. 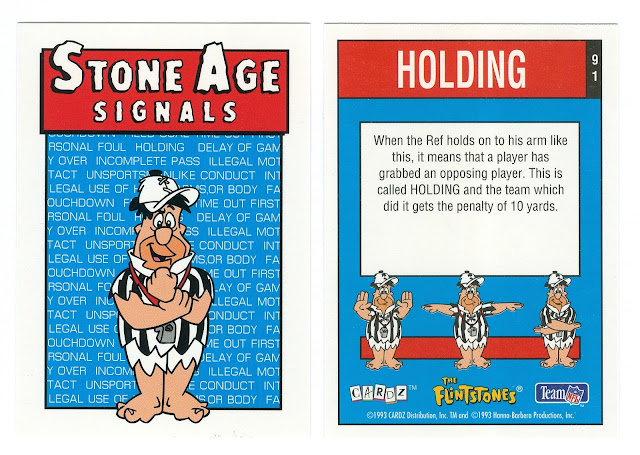 When I was young, I remember buying hockey stickers that had referee signals on them, and I really liked the idea. These are better than the stickers since they also give a simple explanation of the penalty.

Here is the front and back of one of the activity type cards.
I enjoyed opening the box, but was surprised that I didn't complete the base set. And unbelievably it was the ten activity cards that I couldn't complete. I ended up needing cards 104 and 105, and 16 of the 36 packs contained card numbers 107-109. No matter, I'll easily be able to pick up the missing cards. 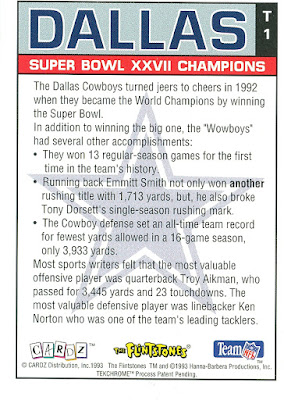 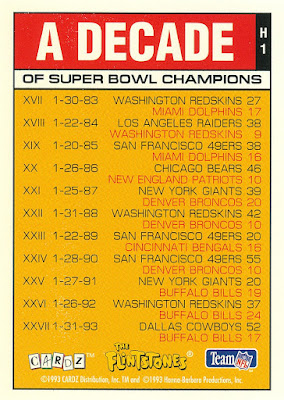 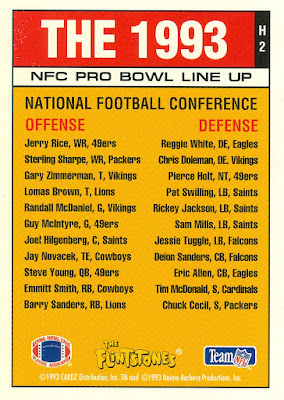 Anyone have a #H3 collecting dust that they don't want?

Panini had a booth at Comic-Con and I had a great time talking to one of their employees that was also there last year. We had a good talk, but when I went by their booth on Sunday to say bye, and get his name, he wasn't there.

They had some football product with them. I bought a pack of this year's Donruss Elite, and a box of 2016 Panini Football that I will review later this week. I didn't buy any of this year's NFL stickers (I should be able to get them here at home) or the UCLA or USC college blasters that hey had in their booth.

Topps had a table in the large Star Wars area on the convention floor but I wasn't really tempted by the oversize Star Wars cards they had available for sale. They were neat but not my cup of tea.

I really didn't take many photos at the convention - I figure that plenty of other people will post theirs online already and I find that there really aren't many good times to stop in the crowd to snap the pictures.

I'll post about more of my Comic-Con purchases tomorrow.
Posted by Angus at 17:29