Here are some more cards from my most recent COMC order.
Two rookies from the 2004 season, and at the time if you had asked who would still be in the league over ten years later, I'm sure that most people would have guessed Winslow.
A good friend of mine is a fan of the Washington State Cougars, and I always hear from him when the Browns draft one of their players. (This friend bought me a Browns jersey last Christmas - of former Cougar defensive lineman Xavier Cooper.) He had nothing but exciting things to say about Harrison. I was hoping for the best.


After getting very few carries during his first three seasons with the team, he really turned it on with 561 yards during the last three games of the 2009 season, including a 286 yard game in Kansas City which broke Jim Brown's team single-game rushing record.


He had a slow start to the 2010 season, with limited carries and was traded to the Eagles on October 18 for Mike Bell. After finishing the season with Philadelphia, he signed as a free agent with the Detroit Lions. The Lions arranged to trade him back to the Eagles, but the trade was voided after his physical discovered a brain tumor. He had surgery, which discovered that the tumor was benign, but there were complications which led to the end of his career. According to his Wikipedia entry, on Thanksgiving 2012, CBS aired a special documenting his recovery which said that he had regained many of his motor skills. I have seen no other updates as to how he is doing.
I didn't own any refractors from this Topps Chrome set before finding some in this COMC order. You can actually tell they are refractors in the light, but best of all they show it on the back. 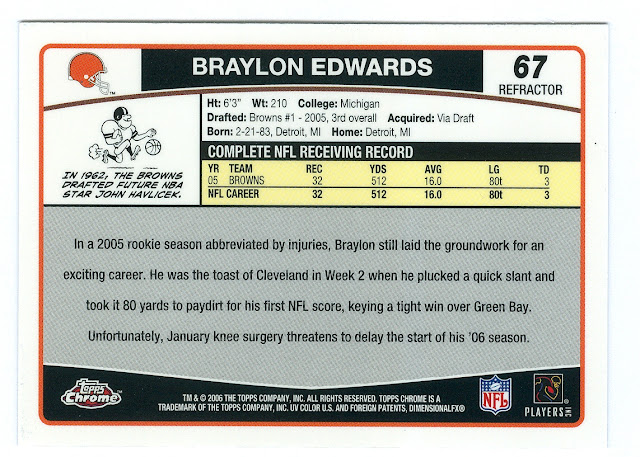 One reason to show you the back of this card was to show that they actually identify the card as a refractor, but the main reason to show it to you is the trivia that the cartoon brings. (And Tuesday is my trivia night with Buzztime trivia.)


John Havlicek actually participated at training camp for the Browns in 1962 as a wide receiver. I guess he made the right choice in going to the NBA as he had a Hall of Fame career with the Celtics.


More parallels of former Pro Bowl players that didn't have the extended careers that many thought they would have.
Once again, more parallels. I was a fan of Brady Quinn, and was always hoping he would do well. I wish he had been given more of a chance to succeed.
A second round pick out of Tennessee, Montario Hardesty fought injuries throughout his time with the Browns, and finished his career with 537 yards on 153 carries between the 2011 and 2012 seasons. After once again being injured during the 2013 training camp, he was placed on injured reserve and then released from the team.
Posted by Angus at 18:50