After my hamstring injury, but before my surgery, a user on the Trading Card Database, T-Rex70,  reached out to me looking to trade for some Seahawks cards that I had.

I found a couple of Browns cards that I needed and it should have been a very simple trade.

I packed up the cards the day before my surgery, but not being able to drive, the post office was closed by the time that my roommate brought me to store with the nearest postal outlet.

Okay. I left money with my roommate, and a note with the contents to put on the customs declaration, and then had surgery the next morning.

After surgery, I stayed with my sister for close to a week. During that time, my roommate told me that the postal rules had changed and that customs forms now needed to be filled out electronically and that I would need the recipient's phone number in a mandatory field. I would have to wait until I returned home to mail the envelope.

A few days later, my roommate was able to take me to a different postal outlet, and I had no problems at that one. I was happy that I had finally mailed the envelope.

Now, the other problem was that I couldn't drive down to my PO Box to pick up the cards that had been mailed to me.

Finally, last weekend, one of my friends said he would make the hour long drive, cross the border, and pick up my mail.

These two parallels were finally in hand. 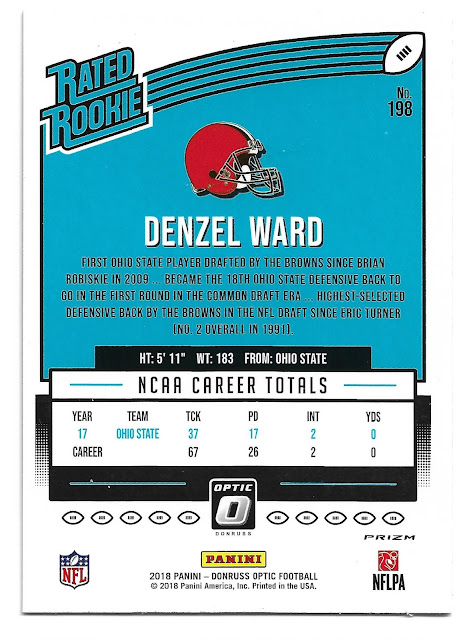 Denzel Ward had a great rookie season, making the Pro Bowl. He's one of the many important, young building blocks that the Browns have for the future. 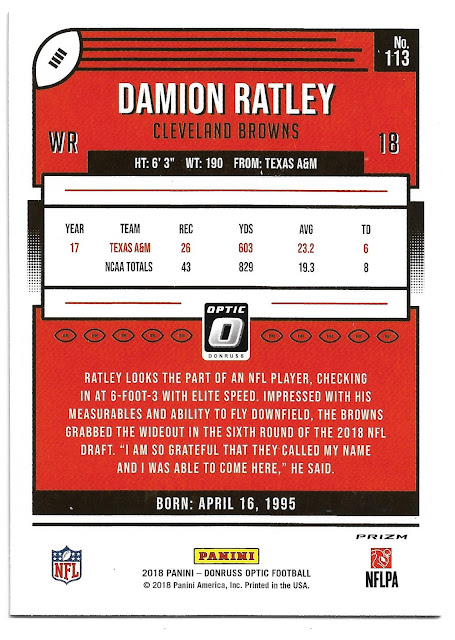 This is my first Damion Ratley card.

Damion Ratley will be in a fight to make the Browns this year after playing in thirteen games, starting three, and catching 13 passes for 144 yards during his rookie season.

Ratley did get a bunch of first team reps during the voluntary minicamps this year as Odell Beckham Jr., Jarvis Landry and Antonio Callaway were not on the field for various reasons. These first team reps can only help him, but I think he'll need to have a strong training camp, and play well during the exhibition games.

I'm just happy to have received this card. I wonder if I'll get another of his cards before his name pops up next on the list of names for the one card in my collection series of posts.

Thank you, T-Rex70. I appreciate the cards, and apologize for the length of time it took me to get you your cards.

Oh, and in a slight health update. I was able to drive to a neighborhood pharmacy the other day. I figured I could sit long enough for a short drive, and I was correct. I won't try anything too far right now, but it is good to know that I can go to the store if I need to.