I saw the news that former Browns linebacker Vince Costello passed away on Sunday, June 23rd at the age of 87.

Costello played football, baseball and basketball at Ohio University, and he played two years of minor league baseball in the Cincinnati Reds system. Following college, he also served two years in the Air Force. He got a late start in professional football at the age of 25, getting an offer to join the Browns because one of his former college coaches became an assistant coach with the Browns and remembered him from college. He became the starting middle linebacker during his rookie season in 1957.

Vince Costello was a key part of the Browns defense that shut out the vaunted Baltimore Colts offense in the 1964 NFL Championship. Costello picked off a Johnny Unitas pass just before the end of the first half as the Colts were threatening to score. 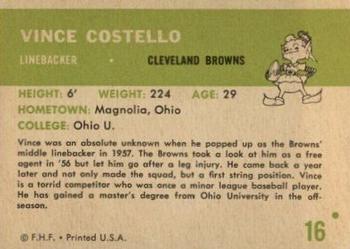 Vince Costello is still the Browns franchise leader for Interceptions at the linebacker position, with 18 in 130 regular season games.

Costello was traded to the New York Giants after the 1966 season, and had four interceptions for the Giants in the 1967 season, including one against the Browns in a 38-34 victory over the Browns.


These are the only three mainstream football cards from Vince Costello's career, and I own copies of all three, although I borrowed these images from The Trading Card Database.

According to the TCDB, five other oddball cards have been made of Vince Costello from the following sets:

After his playing career ended, Vince Costello joined Paul Brown as a coach with the Cincinnati Bengals from 1969 - 1973. He also had coaching stints with the Miami Dolphins and the Kansas City Chiefs.

After his coaching career finished, he started Vince Costello's Collectibles and although I'm not sure how many Hall of Fame figurines that he made, I do know that he made three Cleveland Browns ones. 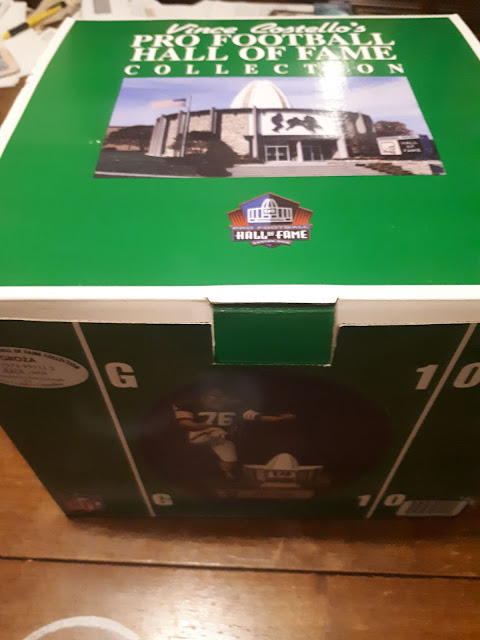 I found out about these figures at a card store in Canton, Ohio during one of my visits to the Pro Football Hall of Fame.

When the store owner was telling me about these figures, he told me that he had both varieties that were made - ones with real autographs, and ones with printed replica autographs.

I didn't have the money with me to buy the ones with the real autographs, but the store owner gave me a really good deal to pick up copies of the other ones.

I took them down from where I display them so that I could photograph them for this post. Each of these figurines are numbered out of 4900.

Although I didn't get a chance to see Vince Costello play, I am happy that I was able to learn of his career through his cards, and books on the 1964 Browns.