Players with only one card in my collection - 15

Let's continue the series of posts showing cards of five players with only one card in my collection.  I'm using sorting tools at The Trading Card Database to look through my collection on their site to see who only has one card, and then finding the first five names that I haven't posted yet. I'm also using the images from their site. 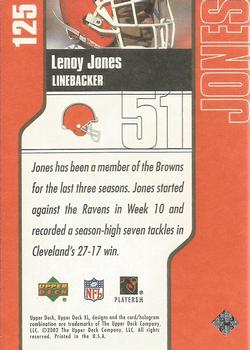 After his college career at TCU, Lenoy Jones started his NFL career with three seasons with the Houston and Tennessee Oilers from 1996-98.

The Cleveland Browns selected Lenoy Jones from the newly named Tennessee Titans in the 1999 NFL Expansion Draft, and played his final four NFL seasons with the Browns.

Along with this card, there is a Holofoil parallel version that I need to find. These appear to be the only two cards listed on the Trading Card Database to represent his career. 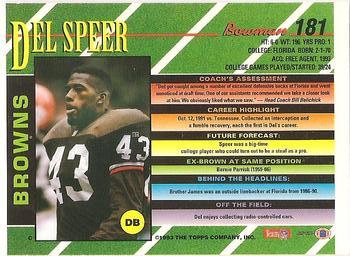 Former Florida Gator Del Speer was an undrafted free agent signed by the Browns before the 1993 season. He played in all 16 games of his rookie 1993 season, starting two of them, and the first eight games of the 1994 season with the Browns. I assume he was then released by the Browns but I can't find a transaction record detailing this. I did find that he signed with the Seattle Seahawks in December 1994, and played his last NFL game with the Seahawks shortly afterwards.

This appears to be his only NFL card. Looking for information on Rich Jackson, I found that he had an awesome nickname for a defensive player, Tombstone, and that he had a vicious head slap that he used during his career. (One article I read said that Deacon Jones credited Rich Jackson for developing the head slap. Another article said that both players claimed to have developed it.)

Rich Jackson started his career playing with the AFL Oakland Raiders in 1966, and the AFL/NFL Denver Broncos from 1967 into the 1972 season when he was traded to the Browns. He was named as a first team All-Pro from 1968-1970, and articles talk about him being a Hall of Fame player before suffering a knee injury in 1971.

The back of the card was a bit optimistic as his career ended after the 1972 season, and this card is the only one to represent his stint with the Browns. 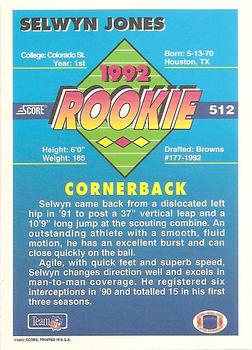 After being drafted by the Browns in the seventh round of the 1992 NFL Draft, Selwyn Jones spent the 1992 season on injured reserve.

He returned to the Browns for the 1993 season and started the season strong with two interceptions in the first week of the season, and one in the second week.

From looking on the Trading Card Database, this appears to be Selwyn Jones' only football card. I find this surprising since he did play in 47 games between the 1993 and 1996 seasons and more players seemed to get cards then. 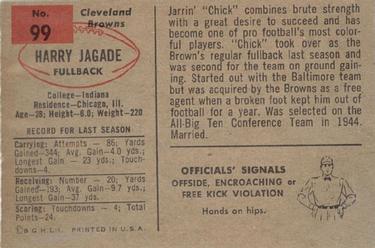 Finishing off this post is my solo card of Harry "Chick" Jagade.

As you can see on the back, Jagade started his career with the Baltimore Colts before going to the Browns. His one season with the Colts was while they were in the AAFC. His Browns career consisted of three seasons from 1951-53, which means that this card is out of date. He played the 1954 and 1955 seasons with the Chicago Bears.

This is the only Chick Jagade Browns card listed on the TCDB. He also had one Leaf college card with the Indiana Hoosiers that preceded his pro career, and one Bears card in 1955. In addition, he also had a card in the 1955 Sport Magazine Fan Club mail in card.

It has been a while since I posted, not since before my surgery, so here is a health update.

My surgery happened on May 13, and went well. The small fragment of my hip bone that broke off with the tendon was able to be reattached with two screws, and everything else was stitched together with dissolvable stitches.

I had my first follow-up appointment with my surgeon on May 28, and he was very happy with my progress, but told me to pretty much keep doing what I was doing, which was pretty much just lying around.

I was able to stand, but if I was going to bend my hip, I had to bend my knee at the same time so that I didn't put strain on the hamstring. I really couldn't sit, which of course meant that I couldn't drive, which of course kept me mostly confined to the house. I was pretty frustrated. I was able to semi-sit on the couch, with my leg bent, so at least I wasn't lying down all the time.

My friends were great, though, and really helped out. I could recline the passenger seat and pretty much lie in the passenger seat of someone else's vehicle. It was better if it was a SUV type vehicle that I could step up and lower myself down from. They took me to get groceries, and as I was able to stand, I sang in my choir's last four concerts, even though it really tired me out.

I am now able to sit upright for a few minutes at a time, and it seems to be getting longer as time passes. I can sit in recliners, with my legs and feet up. (Too bad I don't own one.) However, this did allow me to go see Rocketman in a theatre with recliner seating.

I can pretty much walk on straight levels without a crutch, but I still need one to go up and down stairs. I don't really have strength in my injured leg. My next appointment with my surgeon is June 25. I'm hoping that I'll be able to drive before then.

One of my friends drove down to my PO Box and collected my mail yesterday, so I have some new cards to show. Since I can sit for a few minutes at a time, I should be able to scan cards for some new posts in the next few days.
Posted by Angus at 15:27