Continuing the sequence of delayed packages that I've received is an envelope that I received from Billy at Cardboard History.


I'll tell you all stuff about his blog that you no doubt already know. You might find any types of cards on there. Billy will collect any card, no matter how overproduced you might think it is, he will want a copy of it.


I find his blog fascinating because it will often show me cards that I know very little about. I've bought the odd racing card to look at, and bought some basketball in the early 1990s, but really, I don't know sets from those sports that well. It is always interesting to see what he will show.


And he enjoys the "history" part of the blog name as well. It is fun to see and learn about old basketball uniforms, or about NASCAR paint scheme, as shown in a recent post about a Batman paint scheme.


Anyway, Billy sent me an envelope, and I apologize to him for the cost of shipping it to Canada. I have a US PO Box that would have been cheaper to send it to, but I tell you it is great when you actually find an envelope in the mail that you know will have cards in it!


And before showing the cards, I have to apologize again. I know that it was a small shipment, but I'm not sure if it was just the cards that will be shown below. His cards were accidentally mixed with some others that I had bought at the same time. (Billy, I'm sure you track these things, if there is something else that I should be mentioning, send me a message and let me know.)


Sadly, Kellen Winslow Jr. did not provide the Browns the career that his Hall of Fame father had. He was the sixth overall pick of the 2004 NFL Draft, and reporters always like pointing out that he was drafted five picks ahead of the Steelers future Hall of Fame quarterback Ben Roethlisberger.


I like the Panini Contenders cards over the years. I enjoy the ticket design concept. This 2012 card uses his uniform number and seasons to provide the ticket information. The Contender cards in 2016 use the players height and weight. I just saw that pointed out on another blog this year, which made me realize that sometimes I'm not very observant with card design.
Now getting this card from Billy surprised me. I know that he likes the name Barkevious. I hope that this was a double that he sent. I'd hate to have deprived his collection of a Barkevious.


When going through the cards, this one jumped out at me. I knew that I didn't own it.


Miguel Maysonet was not drafted in 2013. He signed with the Eagles as an undrafted free agent, and was picked up by the Browns after the Eagles let him go. He didn't make the 2013 Browns, but then over the next few years was signed to the practice squads of the Colts, Chargers, Jets, Redskins, Steelers and Bills. He never played in a regular season game, but you have to admire that so many teams signed him at different points in time.


Since I needed the card, here's the back: 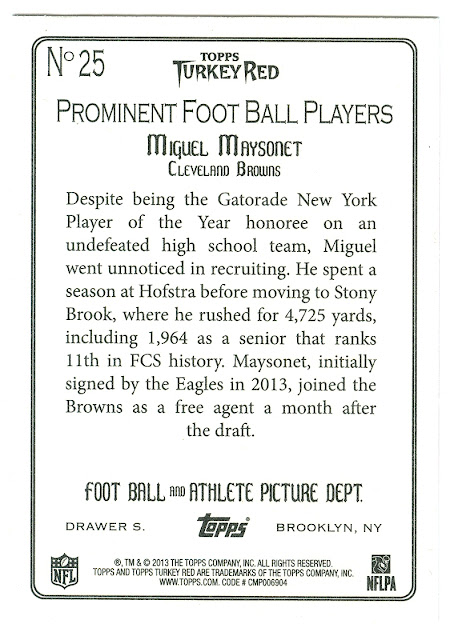 Billy, thanks for the cards, especially hitting one that I needed! Since you like receiving anything, eventually you will be getting a starter collection of Cleveland Browns. I figure it will be a good way of clearing out some of those cards that I have so many copies of. I'll be curious to see how many different ones I can come up with, and what that will do to vault you into the top Browns collectors on the Trading Card Database.


And, hey, really, I'm not punishing him by sending him Browns cards! I'm sure he'll want them anyways...