As some readers may have seen in a post on the Night Owl Cards blog, I drove down to Watertown last Sunday, and met up with Greg (Night Owl) and travelled with him to Syracuse to attend a card show at the Fairgrounds.
The card show turned out to be a collectible show with cards, toys and comics. Although I glanced at the toys, I was pretty much just looking for cards at the show. Had I noticed any Cleveland Browns products among the toys, I surely would have considered buying them, but nothing jumped out at me.
As mentioned in Night Owl's post, the first table we went to had parents that seemed to be selling off their son's collection of stuff. Greg may have passed on buying a box of Topps baseball cards that he was looking at, but I made my first purchase of the show at that table. 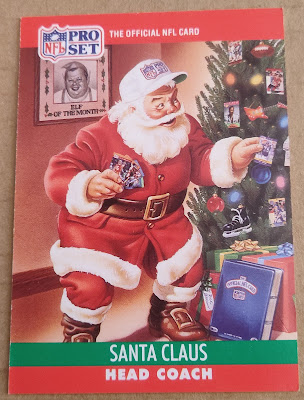 Although I already owned a copy of this 1990 Pro Set insert, it was in a binder of Christmas related cards that I own. This copy will get added to my 1990 Pro Set football set.
After spotting another table that I wanted to bring Greg back to, I moved along through the hall to see Greg digging through some nickel and dime boxes. I pulled a bunch of cards from those boxes, and a few from some dollar boxes that the same seller had.
These two Rocketeer stickers were among the few mistakes that I made while looking through the various boxes throughout the show. For some reason my memory was telling me that I owned the Rocketeer set, but not the stickers. When I pulled out my set, I saw that the stickers were all there. Oops. 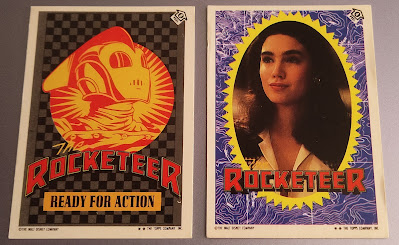 But I'm not going to complain about picking up a Jennifer Connelly sticker. I don't think that would ever be a mistake.
From the nickel/dime boxes, I found some basketball cards for myself. 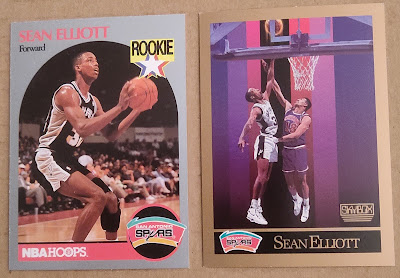 I've followed the Arizona Wildcats basketball team since high school, and Sean Elliott was always a favorite player.
I also found these old Celtics from a 1993 Action Packed set. 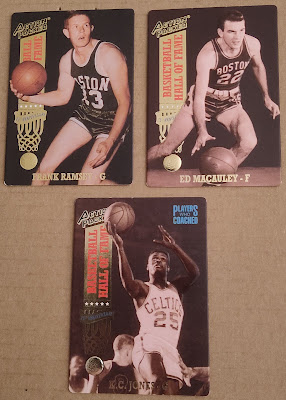 This next card I picked up because it just seemed so bad. 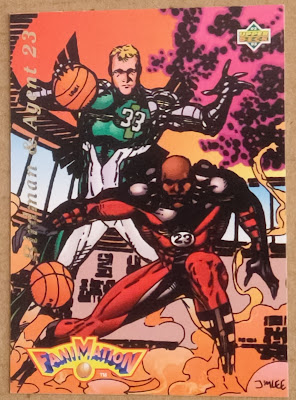 Birdman & Agent 23?  Umm, okay.
I've collected comics most of my life, and am very familiar with Jim Lee's artwork. I really don't know what to think about this Upper Deck basketball card that he drew. I'm rather surprised that I even identified it as a Larry Bird card as I searched through the box of cards. 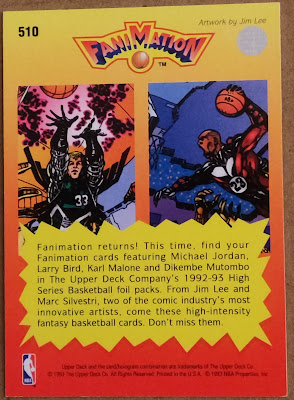 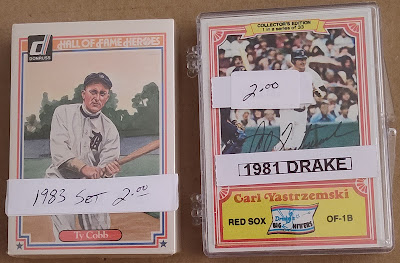 I'll probably break up the Drake's set, but the Donruss Hall of Fame Heroes set will wind up in one of my binders.
I also picked up a not so random soccer card for one of my friends. Both of us cheer for Aston Villa, and I think he'll get a kick out of getting this John McGinn card. 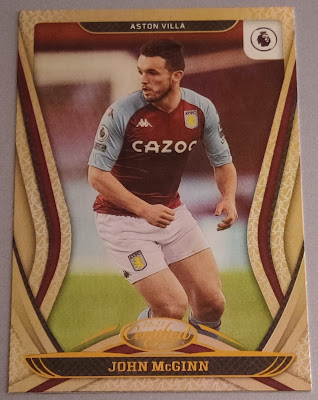 You may have noticed that I haven't shown any Browns cards yet from these tables. When I got home, I sorted all my Browns cards together and started going through what I needed. By doing that, I forgot what cards came from what table (except for a couple of cards at the end of this post). I even put the two Browns cards that I got from Greg in that pile (I needed both), so I don't even remember which specific cards he gave me. (Sorry.)
As Greg went off to find his vintage cards, I started going through some monster boxes that had a wide range of prices. The first couple of boxes were twenty cents each, then they moved to $2 boxes that would give you 12 cards for the price of 10, and then some unmarked boxes (which I am usually wary of).
I found a number of cards in those boxes, and the unmarked cards had decent prices. I ended up spending around $100 at this table, buying cards for my collection and some for friends.
With Greg's two cards, and the cards from all these tables, here is what I ended up adding to my Browns card collection.
Believe it or not, these two 2022 cards are only the second and third 2022 Browns cards in my collection. I just really haven't been buying any new cards. 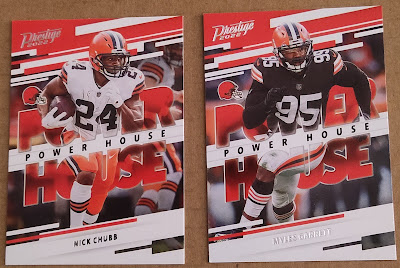 Hmmmm, while writing this, I notice that the two cards display differently. I'll have to look and see if one is a parallel.
Here are some 2021 cards. The Rookie Phenoms card has a nice non-white swatch. 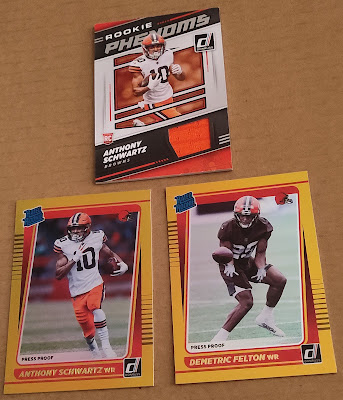 I guess the 'My House' Baker Mayfield insert card is a little out of date. However, I loved all his Progressive Insurance commercials where the stadium was his house. 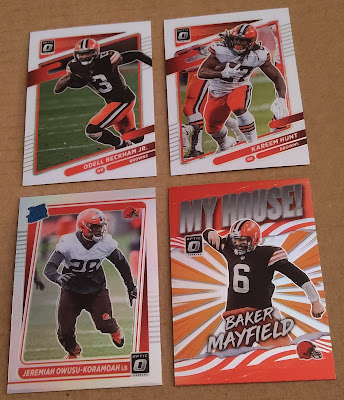 A bunch of Jeremiah Owusu-Koramoah cards, including my first autograph of his. After typing the name, I understand why people just refer to him as JOK.
The Panini Phoenix purple parallel is numbered out of 125.
I'm really not sure what the stars on the Nick Chubb Panini Illusions card are for. Since the print in the card is blue instead of black, I'm thinking it might be the Retail parallel, but I am not sure. I have managed to acquire quite a number of 2021 Panini Mosaic cards locally, but still pulled these out of the last dealer's boxes. As it turned out, I needed all of the Mosaic cards that I pulled. I really wasn't expecting that but I guess they do have a whole bunch of parallels to get. 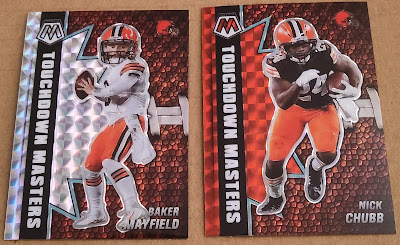 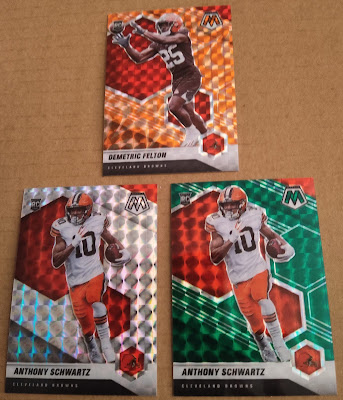 The following three 2021 Panini Prizm cards are all numbered.
The Chubb card is numbered out of 39, the Landry card out of 199, and the Garrett out of 225. 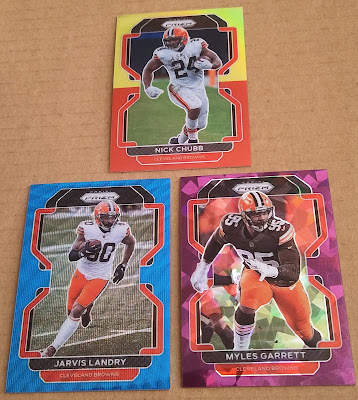 I was happy to get the autographed Tommy Togiai card. I don't own any of his cards from the 2021 NFL Contenders set, so this college card is a welcome addition to my collection. 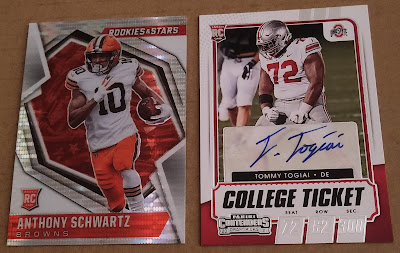 Moving back to 2020 cards, the Panini Limited Baker Mayfield card on the right is a Silver Spotlight parallel numbered out of 149. 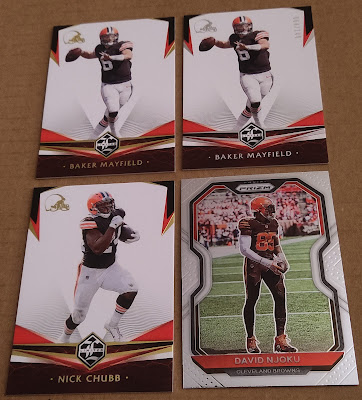 After we left the card show, I looked at my phone to see how the Browns did on Sunday. I really wasn't too keen to try and watch the Browns debut of Deshaun Watson.
Although I think that Watson is a great quarterback, I believe that the quarterback is usually the face of the franchise, and he isn't who I want to represent the team.
I was happy that the team won, and later when I looked and saw that Donovan Peoples-Jones had a 76 yard punt return touchdown, I was glad to have picked these two cards up at the show. 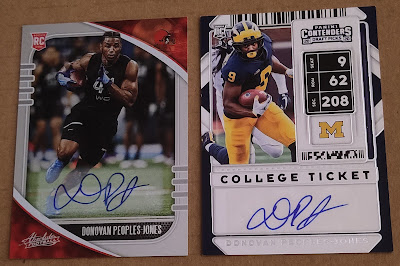 The punt return touchdown was the Browns first since Travis Benjamin ran one back against the Titans in 2015.
The top card in the photo below was a 2019 card of the Browns former first round pick Antonio Callaway.
The bottom card is a 2010 card of Montario Hardesty. 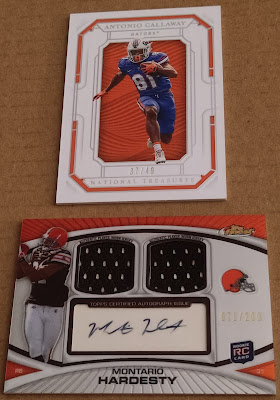 The dealer that sold me the Hardesty card was so happy that I bought it. He said he had just added it to his boxes of cards for sale, and didn't know if anyone would be interested in it. It is numbered out of 200, and set me back a whole four dollars. I was pretty sure that I didn't own a copy of it, but there was no way that I would have left it behind at that price.
After going through all these monster boxes, and with some dealers already starting to pack up for the day, I realized that I hadn't even really seen a third of the tables at the show.
I wanted to bring Greg over to a table where I wanted to show him an oddball set that I was thinking of grabbing, but then a table in the way called out to me.
I had been looking for a 1973 Topps Carl Yastrzemski card for a Simpsons loving friend. You know, the one with the big sideburns? Anyway, I saw a small pile of 1973 cards in a showcase and found one for him. 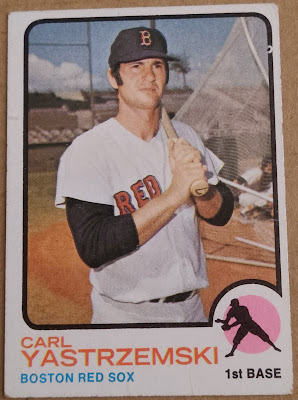 As well, I saw a stack of 1970 Kellogg's football cards. In it I found a Christmas gift for a friend of mine that is a big Raiders fan. 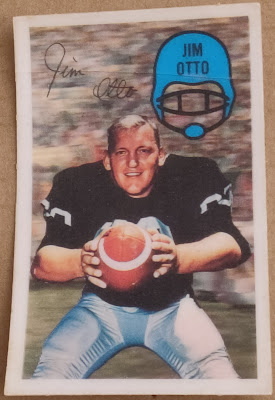 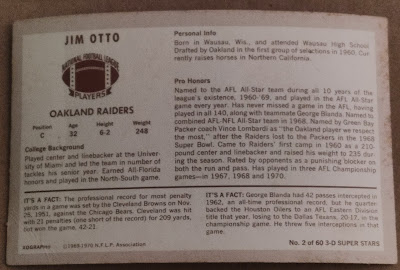 My friend actually spent a year working for the Raiders as an archivist, and worked with the late Jim Otto on his book.
Unfortunately, when I got it home, I saw that it had a crack right under his name. It didn't look cracked in the card show's lights.
After that, we continued on to the table I wanted to bring Greg to. 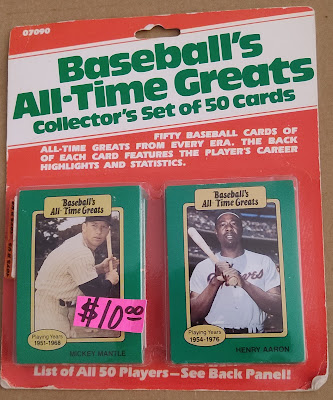 I knew that at home I had a continuation of one of these Baseball Greats types of sets, but needed the original set, and thought that it might be for this one. Sadly, I was mistaken, but I am still happy to have picked this one up.
Oh, and a funny thing that I discovered while looking at this set.
I'm old enough that I put elastic bands around cards as a kid. So many of us did, and we are all told not to do so now.
Take a look inside the blister portion of this set:

So funny to see!
While also looking around the other items on this seller's table, I noticed this card that I needed for my collection. 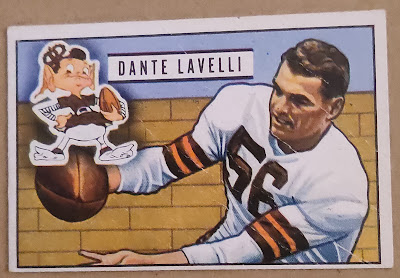 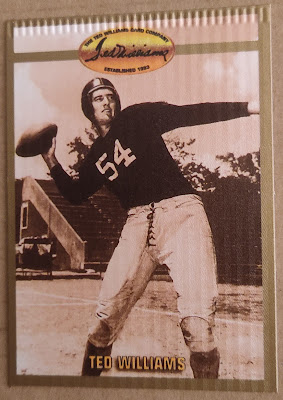 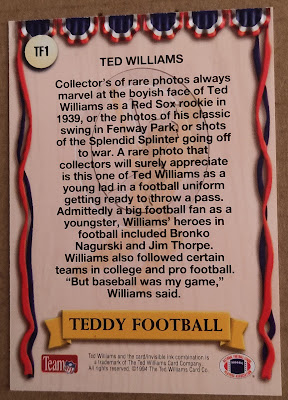 Leaving that table, we decided to do a quick tour of the rest of the show.
Again, I came across another vintage card that called to me. 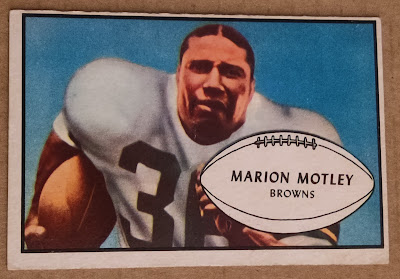 I saw a $40 price sticker on this 1953 Bowman card, and decided to just buy and not think. I mean, at this point it was an expensive show already, so really, why worry about it?
Before buying, I took a look at the rest of the table and spotted a couple of Sportscaster cards that I could also bring to my Raiders fan friend. The seller threw them in for free with the Motley card. 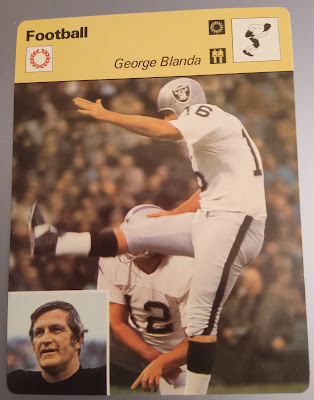 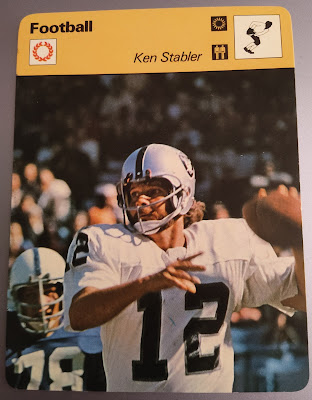 There were no more purchases after that, except for my tasty Buffalo Wild Wings dinner, but I do have one last photo of cards to show.
The following Mets cards were also given to me by Greg, along with the two Browns cards that I accidentally mixed into the photos above. 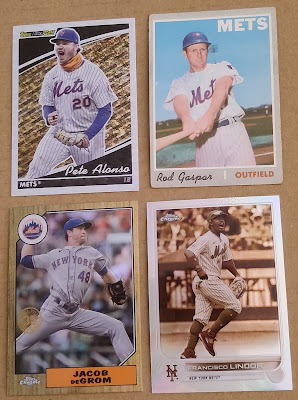 Greg, thanks for the cards, for the great company, and for doing the driving between Watertown and Syracuse! I hope that we'll be able to do it again sometime soon.
Posted by Angus at 22:24