Okay, so that title doesn't sound great, but once again I participated in the card blogger Secret Santa exchange, this year organized by Jon at the A Penny Sleeve for your Thoughts blog. Great job, Jon!

My secret gift arrived yesterday, just under the Christmas wire, delivered by Canada Post to my home address. Having submitted both my home address, and my US PO Box, I didn't know where my gift would show up.

As it turns out, the Canadian address probably made it easier, as I had a Canadian Secret Santa this year. My blog post title has probably clued you in to the fact that it is Mike at the Not Another Baseball Card Blog!

Now, unfortunately for Mike, as a Browns collector I know how tough it can be to find stuff for my collection in Canada, and I'm sorry if I forced him to order stuff in for me.

Anyway, on to the great cards that he found for me! 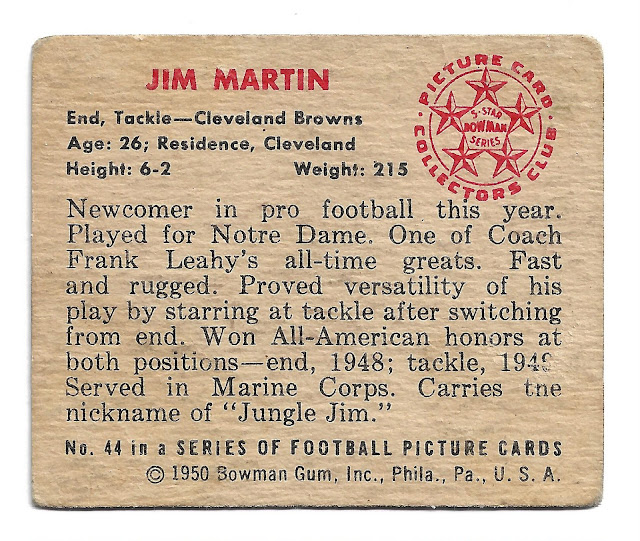 Jim Martin was drafted by the Browns in the Second Round of the 1950 NFL Draft, the Browns first season in the NFL. He helped that team win the 1950 NFL Championship, coming up with an important sack for a safety in the Divisional Final against the Giants that the Browns won 8-3.

Following the 1950 season, Martin was traded to the Detroit Lions, where he played eleven seasons, and won three more NFL Championships - all against the Browns.

I had previously owned one Jim Martin card, a 1990 Notre Dame Collegiate card. It is nice to add his Browns card to my collection. 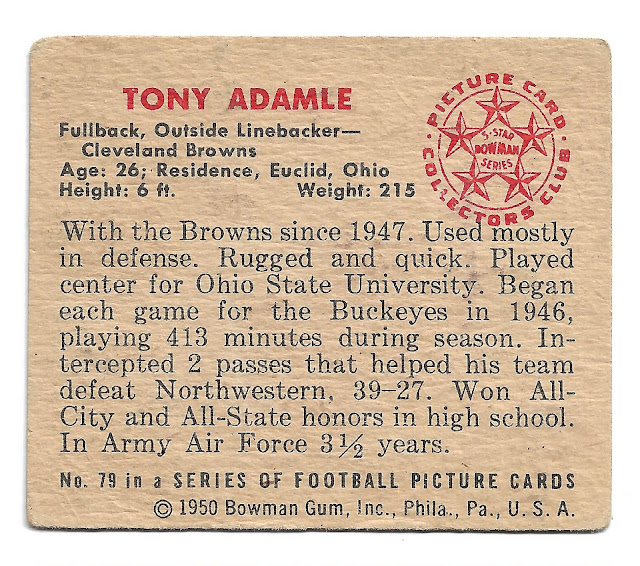 While still in school, Adamle came back to the Browns to play for the 1954 season, helping the Browns win their second NFL Championship. His agreement with the team was for him to be allowed to practice with the team only one time per week so that he could continue his studies. He retired after the 1954 season to continue his medical schooling and start his medical career.

(For those that recognize the Adamle name, he is the father of Mike Adamle, former NFL running back, sports broadcaster, host of the American Gladiators, and a General Manager for WWE Raw in 2008.)

This is the first Tony Adamle card in my collection. He also has a 1951 Bowman card for me to find.


Mike, thanks for the beautiful Secret Santa cards! They are very welcome additions to my collection!

Merry Christmas, everyone!
Posted by Angus at 14:08