Okay, what is two and a quarter years between posts?

I'm still around and collecting Browns cards. I mostly took a break from collecting during COVID times, but picked up some when available, and still read a lot of blogs.

I'm a lot disgruntled with my Browns for the Deshaun Watson trade and contract, not because I don't think that he is more physically talented than Baker Mayfield, but for the off-field accusations that he is facing. I don't want him as the face of the team that I cheer for, as quarterbacks mostly are.

I haven't worn any of my Browns clothing since the trade, and I won't attend any Browns games while he is part of the team. I'm still going to cheer for the team, but not for him. I'm sure that I will wear Browns clothing when the season starts, but I dread how many people might ask me for my opinion of him.

I am still collecting all Browns cards, so I will add Watson cards to my collection, but really doubt that I will scan and show any of his cards on here in any posts. (Of course that would also mean that I have to post.)

Anyway, I'm going to announce a new card blog that I will be starting, but first will start this post with a small contest to hopefully draw some views to the announcement of the new blog.

The prize for the contest is an exhibit card that I picked up at a local show some time last year of one of the new Hall of Famers that will be inducted tomorrow: 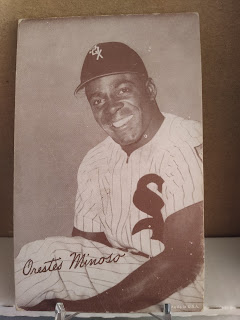 The winner of the contest will be randomized from all those that answer a question correctly in the comments below:

What is the first Minnie Minoso card that I ever owned?

(For anyone interested in seeing a bunch of Minnie Minoso cards, a gallery of them can be found at The Trading Card Database.)

I will announce the winner on Monday. I look forward to seeing your guesses.

Over the years of reading card blogs, I have always been intrigued by the various set blogs out there. I thought about the various sets that I owned and wondered if I should start one of my own.

Then I came across an old sealed set of 1988 Swell Greats football that I had bought at a card show a while ago. 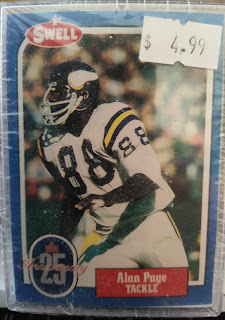 I figured doing a card by card blog of this set would be a good idea as it is only a 144 card set, and it would also allow me to learn more about the members of the Pro Football Hall of Fame through the Class of 1988.

Looking in my Browns collection, there are 12 cards from this set in there. To make sure there is a Browns card in this post, here is the Jim Brown card from the set: 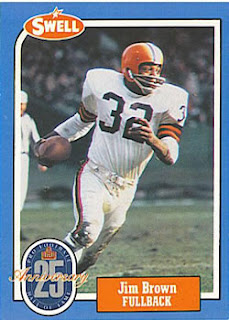 Thanks for reading this announcement, and I hope that you will enjoy the 1988 Swell Greats Football - Card by Card blog!