Players with only one card in my collection - 14

Here is another post in a series showing cards of five players with only one card in my collection. I'm using sorting tools at The Trading Card Database to look through my collection on their site to see who only has one card, and then finding the first five names that I haven't posted yet. I'm also using the images from their site. 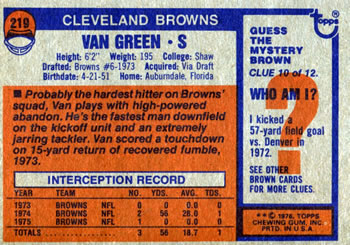 Most of Van Green's information can be found on the card back above. He was drafted in the sixth round of the 1973 NFL Draft.

Along with the games listed on the back of the card, he played in the first game of the 1976 season with the Browns, before finishing his career with the Bills from week 3 to 7 of the same season.

This is his only football card listed on the Trading Card Database. 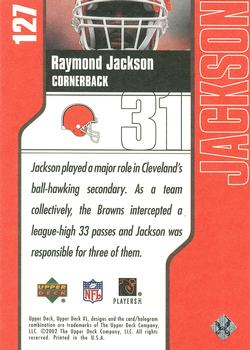 Raymond Jackson was drafted by the Bills in the fifth round of the 1996 NFL Draft. He was selected away from the Bills by the Browns in their 1999 expansion draft, and played three seasons with them.

This is a 2002 card, and Raymond Jackson remained with the Browns during this season, but as the Player Development Coordinator from 2002 - 2004.

According to the Trading Card Database, there is also a Holofoil parallel to this card. Other than that he has no other cards listed on the database. 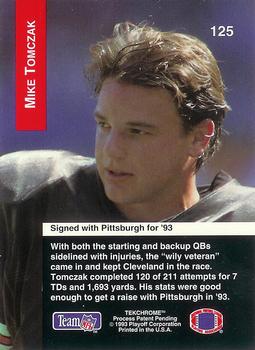 An undrafted free agent out of Ohio State, Mike Tomczak was originally signed by the Chicago Bears in 1985, and played with them through the 1990 season.

After playing with the Green Bay Packers in 1991, Tomczak was signed by the Browns after Bernie Kosar broke his ankle against the Dolphins in Week 2 of the 1992 season. Todd Philcox started the third Browns game of that season before Tomczak came in to start the next eight games until Kosar was able to return. 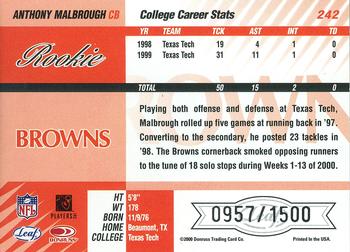 A fifth round pick of the Browns in the 2002 NFL Draft, Anthony Malbrough only played one season with the Browns. After that he continued his football career with one season in NFL Europe and then eight seasons in the CFL.

Pro Football Reference lists him as being the brother of former NFL player, and former Brown Jerry Ball.

From his rookie season, Malbrough has a Limited Series parallel to this card. I thought that this was the only set that represented his stint with the Browns, but in looking at his page on the Trading Card Database, I see that he was photographed in a Browns uniform in the 2002 Pacific set, with his team being listed as the Houston Texans. That card has three parallels. It looks like that gives me more cards to chase. Gern Nagler has an interesting history with the Browns. Although he was drafted by the Browns in the 14th round of the 1953 NFL Draft, as you can read above, he was traded to Baltimore before the season began. The trade was historic. It was the largest trade at the time, with fifteen players changing teams - ten from the Browns to the Colts, and five going back to Cleveland. It is still the largest trade to involve only two teams. The only larger trade, the Herschel Walker trade, involved three teams - the Cowboys, Vikings and Chargers.

Nagler was waived by the Colts and signed by the Chicago Cardinals where he played five seasons, missing the 1954 season to military service. He played the 1959 season with Pittsburgh before finally coming back to the Browns where he finished his career playing in the 1960 and 1961 seasons.

This is Gern Nagler's only mainstream Browns card. He also has two oddballs from 1961 with a Fleer Wallet Picture, and a National City Bank card.

As an update to my torn hamstring - originally I was supposed to have surgery on it today, but due to a small mix-up with the various hospital offices, my surgery was postponed until next Monday morning. I just want to get it over with so I can start the rehab and get to the point where I can sit normally again.
Posted by Angus at 23:44